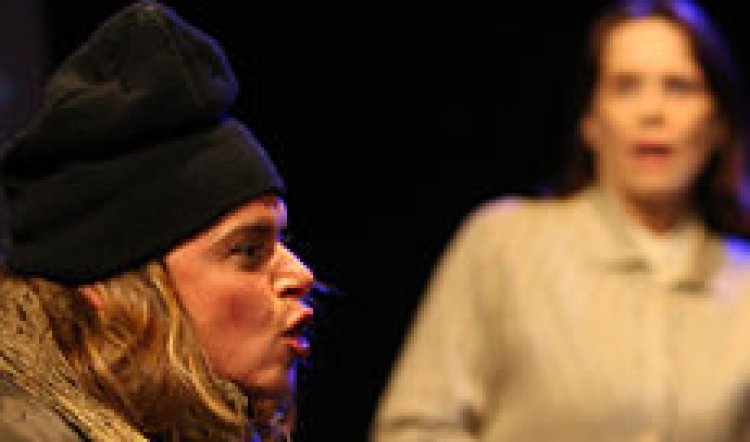 Funny thing is, Jane Phegan is one of those deceptively angelic looking women who have a whole other side to them that sort of comes out after dark. It may have something to do with her upbringing.

“Wahroonga, that was childhood,” she says. “Then Kings Cross for ten years. I adored it for such a long time. But I had to get away to somewhere cleaner and quieter, and on the ground.”

Consequently, she’s been living in Coogee for a month and looks clean, quiet and grounded. This is good because she’s about to go back into the amazing world of Tony Kushner’s modern American classic, Angels in America, Part 1.

It’s the production, directed by Alex Galeazzi, that wowed audiences at the New Theatre last year and its success then seemed to warrant a further life: which it now has at Parramatta Riverside.

“When Alex first called me about being in it – the first time – I said no, I won’t want to work and not be paid.” This response immediately tells you, dear reader, that we’re talking about a co-op production where some of the finest practitioners of theatre get to subsidise our enjoyment of it by working their bums off for nothing. It’s known as independent theatre and is a problematic sector that will be addressed here later.

“But,” says Phelan, smiling and sighing simultaneously. “Alex said, ‘please just read it. Come and read it for auditions for me.’ So I did and I thought – I’ll just read it but I’m not going to do it. Then I found myself thinking – I don’t want to be the Angel, I want to be Harper. And that’s always a bad sign.”

She was right: with one read she had talked herself into it.

“I read it again and then said ‘yes – I love it so much I don’t mind not being paid’.” Which proves one thing: Jane Phegan is an actress to the very marrow of her bones despite her best efforts to do otherwise.

As a schoolgirl she did classical ballet for nine years so being on stage was “normal”. She loved being in a school production of Annie Get our Gun (as a dancer), then adolescence came crashing in and with it a mortal fear of the stage. She finished school and went to university – to Sydney, then to Queens in Kingston, Canada.

“I did arts but I always managed to steer myself into the directing jobs and things like that; and Sydney was all theoretical so that was okay.

Returning to Australia, she still wasn’t ready to be an actress. “When I got back a friend said do you want to work tomorrow? I need someone. It was for three months, but somehow six years later,” she shakes her head and grins. “I didn’t actually intend to have a career in retail.”

But she did, ladies and gentlemen, she did. Rising from humble casual to big(ish) cheese in the Holy Sheet empire, she found a summer job that turned into a whole retail career.

“I woke up one morning and thought – what? How? I mean, I loved it but, well! I was in my late 20s and I finally faced that I had to do it [act]. It was frightening, but more frightening not to do it.”

Whether or not it was her fear of flying, the fact is Phegan and drama school had not gelled first time around. She had rejections from NIDA, VCA and WAAPA before academe and the world of percale caused the almost ten-year diversion. But she returned to theatre and acting on her own terms. (“I went to a show a week, sometimes I didn’t eat so I could afford it.”) She did independent theatre in her spare time, then applied to Nepean and got in.

“When I started at Theatre Nepean it was a marvellous, challenging time. That’s where I met David Williams [of version 1.0 the company whose Deeply Offensive and Utterly Untrue, From a Distance and Singing The Lonely Heart also featured Phegan] and version 1.0 now has triennial funding to 2010, so that’s going to be really interesting.”

Meanwhile, she is returning to Angels because, she says, “I don’t write myself and I love great writing. It’s a joy to say the lines, to play the characters – they’re clearly drawn. The nutty ones – well, they’re all nutty, it’s life. It’s a pleasure to read. It hasn’t dated, scarily not.”

The cast has two changes only and as well as Phegan there is Akos Armont, Abi Austin, Ray Chong Nee, Laurence Coy, Anthony Gooley, Elaine Hudson and Tyran Parke.

“It’s such a terrific cast,” she says. “When we had the first read with the new guys it was very exciting and is now such fun. And phenomenal to watch. Another great thing is that Elaine [Hudson] is also amazing. The woman is an encyclopaedia. I read a lot but when you start talking to her you realise you’ve read nothing!

“It’s daunting but wonderful. She does such research. She gave me a CD of viola music and in the script Pryor likens it to the voice of angels. And I think this play has that: the voices of angels.”