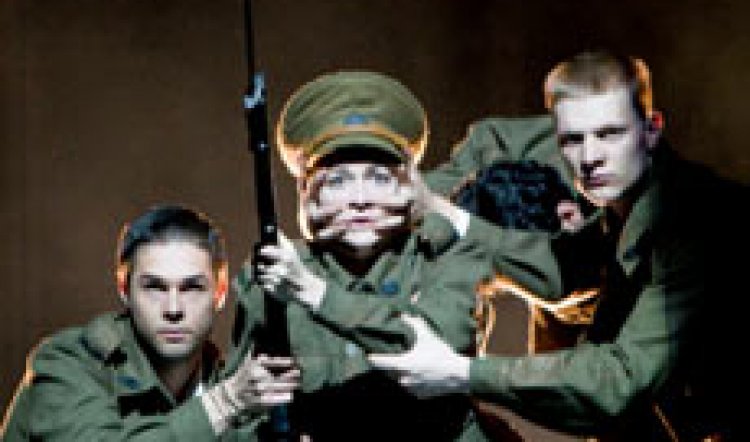 THE combination of a master theatremaker such as Nigel Jamieson (or Barrie Kosky) and the STC Actors Company is what I always thought the company would be about: taking an idea and starting from scratch in a collaborative, probably iconoclastic, and definitely different way to produce work which would be out of the ordinary and unlike most other shows we are accustomed to seeing or performing.

Gallipoli does all the above and more. With the addition of 23 third year NIDA students to bulk up the ensemble even further, the concept of retelling the events of Gallipoli – minus contemporary official censorship and today’s rose-tinted sentimentality – is an intriguing one.

In an interview in the program, Jamieson observes of an early rehearsal that “of 36 actors in the room, few had anything but the most cursory knowledge of the story and in the first days of reading the testimonies of those involved there was a deep sense of shock.”

He also says: “At a time when Australia is at war what other lessons might we learn from Gallipoli? Does a celebration of courage, humour and larrikin bravery help us much? Does our support of an imperial power, without proper national supervision, to invade a Muslim country that posed no threat to us ring other bells?”

His second question flags that this Gallipoli will not be a rejigged, relocated satirically jolly Oh What a Lovely War, while the third question is inevitable in 2009. His first observation, however, represents in microcosm the reality of the wider Australian experience. And, as the inexorable story unfolds, even those of us who thought we knew a bit about it, or had conscientiously read up on the country’s historic baptism by youthful blood, probably hadn’t stopped to consider Australia’s responsibility for the carnage and futility of the Dardanelles adventure.

It has become fashionable – and a relief – to be able to sneer at the dozy old buffers and frightful aristocratic bunglers of the British high command. These were the bounders who deliberately sent good Aussie and Kiwi boys to their deaths while the rest of Australia knitted socks and nurtured loyal thoughts toward the Mother Country.

Well yes, and no. Watching Gallipoli, drawn in by its irresistible narrative force, it becomes apparent that Australia’s leaders were as foolishly culpable then as have been more recent ones when it comes to playing spaniel to an awesome master.

Jamieson has an imagination and boldness that soars way beyond the constraints of a stage. He has the knack of gathering around him creative technicians (including co-designers Brad Clark and Alexandra Sommer) who are able to realise a wholly integrated amalgam of humans, text, video, audio, music, choreography, physical theatre, physical settings and – in this instance – actual first person accounts of an event which has been mythologised into soft focus; and is now returned to the sharp, intake-of breath present.

It’s a sprawling series of tableaux and energetic set pieces which illustrate the key moments that finally led to the crunch of the longboats’ bows in the sand of the Dardanelles. Innocent gung-ho young men are rah-rahed into joining up. They march off, onto their troop ships. They train in the Egyptian desert, they wait interminable waits for action, and they commit mayhem and worse in the brothels of Cairo. And then the reality of Gallipoli. 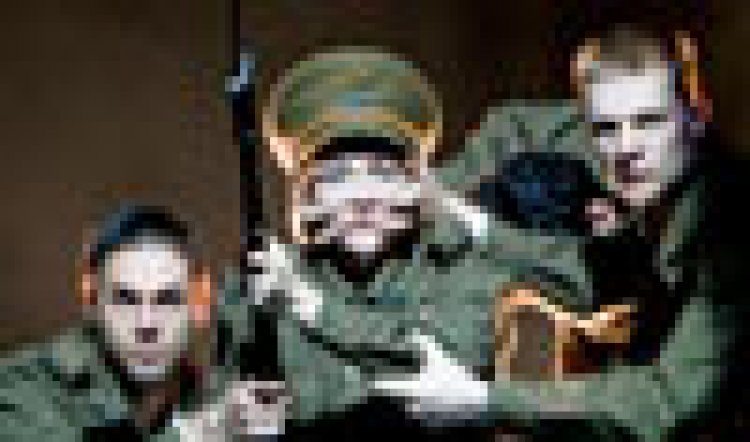 Reading a history, no matter how good, is one thing. Seeing it in tenderly choreographed and graphic detail is quite another. The sweep of dreadful history and circumstance is linked and advanced through a number of participants: notably CEW Bean, official war correspondent, whose cheery dispatches bore no resemblance to his private diaries. General Sir Ian Hamilton (John Gaden) a dear old fool whose good sense and experience were overcome by loyalty and the sheer weight of medals and gold braid on Lord Kitchener’s uniform.

Peter Carroll gets proceedings underway with a turn reminiscent of an Old Time Music Hall MC, but his joviality is short-lived and sardonic; the jolly oompah quickly turns to a soundscape reminscent of baroque sarabande and threnody and, at one late point, a Turkish lament (this is Alan John’s best work in a long time). In addition, the sound effects and lighting (Steve Francis and Trudy Dalgliesh) fill the otherwise cavernous, empty stage with an evocation of sunny Australia and the stinking mud of Gallipoli that is so strong you can feel it.

The troupe serves the work and becomes immersed in it. The NIDA students bring a richness and poignancy that is at times painfully moving and when the Last Post rises above the final carnage the sense of release and sorrow is all the more powerful. It’s an extraordinary achievement to have you bolt upright and hoping the story isn’t going to end in the way you know it must and the images linger long after the end.

Gallipoli is not flawless, the opening 20 minutes are muffled and over-wordy with the effort of setting up the stories and slotting in much painstaking research, and it takes a while to latch on to recognisable characters with whom one can make the journey. The staging is brilliant, however, as projections of old photographs come to life via a video camera on the actors; the choreography of the set pieces is breathtaking, while the frequent changes of pace and focus allow for both reflection and engagement.

Gallipoli is a production of which the STC must be proud: it’s the kind that only a state theatre company could – and should – mount, and it’s money well spent. If I were queen I would decree that every high school student in the state must see it, but that suggests the rest of us have nothing to learn or savour of the experience.

If the Actors’ Company continues to be engaged in this kind of experimental, monumental and meaningful work (rather than just working through the canon of Plays With Large Casts) it might be time to reconsider long-held disquiet. We shall see.