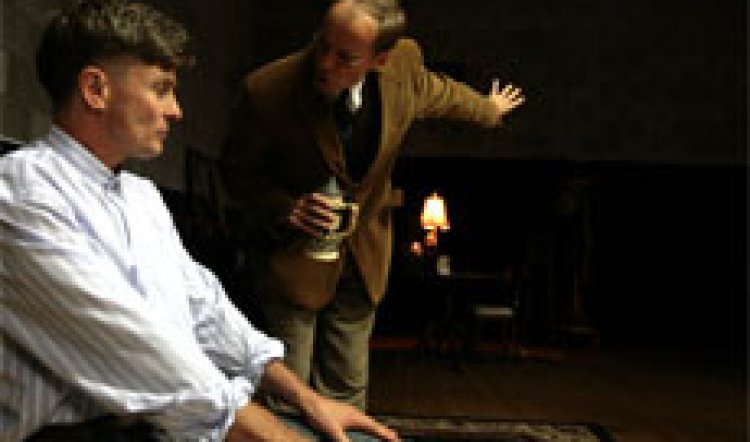 There are those, like the late lamented Sandy Stone, who are happy to go out “for a nice night’s entertainment”; but there are others who seek something more. For Stone people, the terms “a John Krummel production at Marian Street” or “a Peter and Ellen Williams production” do not strike fear and groaning into otherwise hopeful hearts. And they are likely to find The Good German not only entertaining but also meaningful, full of “penetrating insights” (it says in the blurb) and a “compelling and ultimately uplifting play”.

As it is, for a non-Stone person, this production of a 2003 work by American playwright David Wiltse revived memories of both the above Sydney theatrical institutions, along with the thought that sometimes the best thing about the past is that it’s gone.

On the other hand, when the past is Nazi Germany, and it is so long gone that present day princes and racing car tycoons see nothing wrong in strutting around in jackboots and sporting swastikas, then there are compelling reasons to revisit that past. What a pity then that Wiltse does it with so little intellectual rigour and such a clodhopping talent for stereotypes.

The play is set at some period – supposedly four years but it’s impossible to tell – during World War Two in Nazi Germany. Four characters are in search of answers to the question: what is a good German? There are many other subsidiary questions that hang off this central theme, and all are examined with varying degrees of portent and credibility.

Gretel Vogel (Linden Wilkinson) is probably the good German because she is probably a good human being and secondly, the most interesting character. But unfortunately there is no real chance of finding out because the playwright kills her off within the first fifteen minutes. This is a bold if foolish decision and one that condemns the rest of the evening to a talkathon between three rather repellent cardboard cutouts.

There is Gretel’s conflicted, pompous, academic husband Karl (Ivar Kants) who appears to have swallowed a poker – which may account for his rectitude but also makes him a German straight out of ’allo ‘allo. Yet he is a model of realism when compared to his friend Siemi (Frank van Putten) who is a cartoon of a minor Nazi apparatchik and clearly itching to hiss “Vee heff veys of mecking you tok” to Wilhelm Braun (Mark Lee). Braun is a fugitive friend of Gretel’s who fulfills the Hitlerian dream of snivelling, desperate, pathetic Jewish ingratiation; and that’s when he’s not being a sneering, semi-belligerent underminer of the master race. What was Wiltse thinking of? 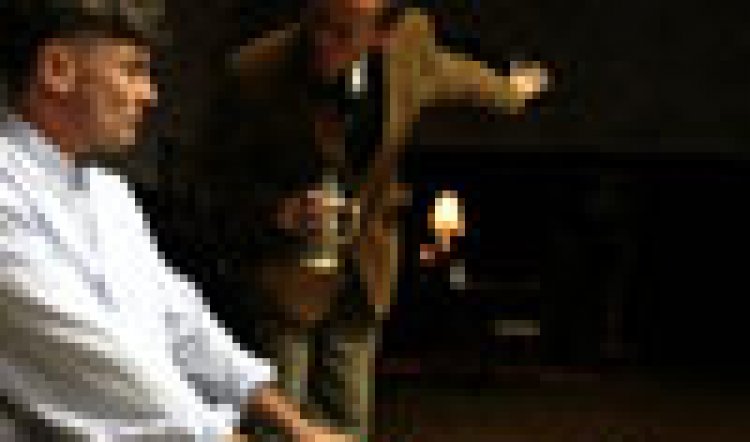 It’s possible that the play might be better with less fervid, strident, broad-brush direction, but it seems unlikely. Rather there are glimpses, from time to time, of what Kants, Lee and Wilkinson might have achieved given better material. Mostly, however, they are stuck with mouthing platitudes and absurd aphorisms while wrestling with characters whose journeys, motivations and lack of substance offer impossible challenges and intolerable melodrama.

The play was apparently seen in the US as some kind of timely and relevant gesture by the playwright to the Iraq war, albeit cloaked in an oblique historical context. This and the sense that Big Ideas and Important Thoughts are being batted about by the characters is really quite offensive. And that’s because these ideas and thoughts are written in such a hackneyed, weary and thus contemptuous manner, that The Good German is much less “ultimately uplifting” and much more depressingly trite.

Graham Maclean’s costumes and set are well observed and thought out: frightened Wilhelm Braun’s clothes are shabby and too big for him; the clerical Nazi Siemi is anally neat and uniformed even though dressed in civvies; the Herr Professor is plumply prosperous and comfortably suited until the moment he realises all is lost and betrayal is nigh, when he removes his tie! As already mentioned, Linden Wilkinson, Ivar Kants and Mark Lee are valiant and more effective than the piece deserves. The less said about the rest, the better

You can here an interview with Mark Lee in Stagecast Episode 59.