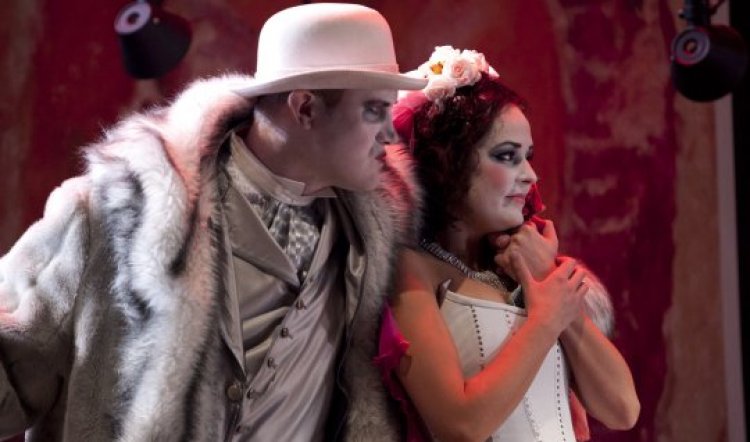 Sydney is in the grip of the Weimar Republic at the moment, in more ways than one. The foundation is the long-planned and dazzlingly rich The Mad Square: Modernity in German Art – 1910-37 at the Art Gallery of NSW. Opera Australia’s Gale Edwards-imagined production of La bohème – set in Weimar Berlin – came next (see review in the archive); and now the Bertolt Brecht-Kurt Weill, Michael Kantor-Raimondo Cortese-Jeremy Sams-Richard Gill Threepenny Opera rounds out a hugely satisfying set of cultural gems currently gracing Emerald City.

The Brecht-Weill masterpiece – as realized chiefly through the chunky-blokey menace of Eddie Perfect as Macheath – is an object lesson in how to portray the cynical, grubby reality of crime and its unlikely but undeniable glamour. (A great pity that the makers of Underbelly: Razor didn’t have the nous to take a look at the show in Melbourne last year, then they might not have made such a hash of this series.)

The Threepenny Opera was first staged in Berlin in 1928 when Weimar made it the pulsating, amoral hub of modernist western culture. Just a year later, however, the Wall Street Crash plunged the world into economic chaos and Germany and the Republic fell inexorably into the clutches of Hitler’s National Socialists. Nevertheless, the impulse behind Brecht’s writing of The Threepenny Opera was the terrifying experience of hyper-inflation in the early 1920s and the memories of the brutality of WW1. Both can be seen to have given rise to Weimar’s excesses – the wellspring of creativity on the plus side and the social divisions on the negative.

The society that spawned Macheath and his milieu is also vividly alive in the paintings of such artists as Otto Dix, Felix Nussbaum, George Grosz, Rudolph Schlichter and others (Art Gallery of NSW) and the beguiling, tawdry allure that swirls about the Sydney Theatre’s stage (choreography Kate Denborough) holds up an unsettling but highly polished mirror to our own times. Here we find economic chaos emanating from Wall Street and, closer to home, a grotesque fascination with squealing, talent-free celebs and an over-priced demi-monde of trashy types such as Justin Hemmes and the Ibrahims and wannabe demagogue Alan Jones.

By comparison Macheath is an honest fellow: freely acknowledging that he’s a sadist and rapist, a thief and a liar. His main concern is not his conscience – the one thing he neither has nor covets – but that he should accomplish his tasks efficiently and stay out of jail. The rest of the time he’d rather be clasped in the expertly pliant lips of whichever floozy has currently taken his fancy.

The Melbourne production has been partially recast since the 2010 staging, with Eddie Perfect, Paul Capsis (Jenny) and Grant Smith (Mr Peachum) remaining of the original principals. Coming in to this group – with just two weeks (!!) rehearsal – are Amanda Muggleton in the pivotal role of the tart-with-no-heart Mrs Peachum and Lucy Maunder as her daughter Polly, the only innocent on the block.

The casting of Paul Capsis as the lubriciously lawless Jenny (and secondarily, as the bishop) is inspired and he is clearly inspired by it. His unique personal mix of gentleness and threat, contained in the slight, fallen angel body and monstrous three-octave vocal range, is Jenny personified. When embellished by his characteristically ribald humour and wrapped in a more shabby than chic lemon and diamante ball gown, the result is an arresting and seminal characterization. He/Jenny opens the show with a piercing scream that heralds the outrages to come. It’s a risky move: not many casts could respond to such a high-stakes challenge and reach similar heights. This one does and more. 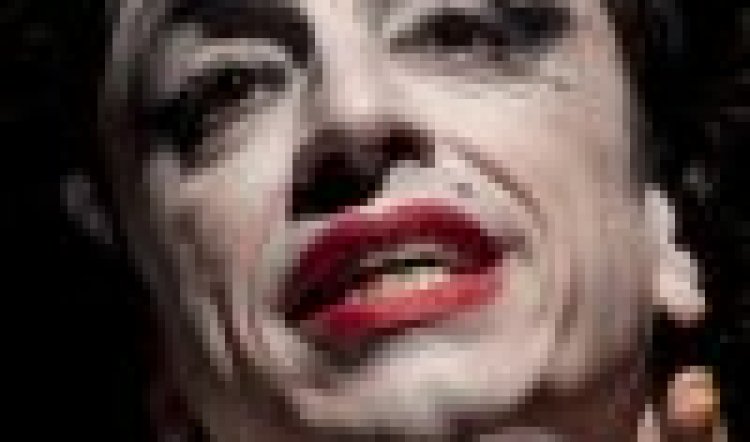 As already said, Eddie Perfect is a glorious Macheath, a psychopathic killer of terrifying charm and attraction. He is as shamefully appealing as Scarpia, as magnetic and crazy-bad as the young Steven Berkoff. The dichotomy of attraction and repulsion has rarely been so logically expressed: Mackie’s whores adore him then shop him with equal enthusiasm. As Brecht the poet (and he was first and foremost a poet) wrote in Song of the cut-price poets “All the gang of those who rule us / Hope our quarrels never stop / Helping them to split and fool us / So they can remain on top.” And that’s how it is in The Threepenny Opera’s under-world, where the truth is that there is no honour among thieves.

”Honour” isn’t a word Mrs Peachum would either use or understand. It’s unlikely she’d have much use for “love” either; and forget the concept of “obey”. The Beggar King’s wife is a law unto herself and Amanda Muggleton makes a glittering, flouncing, rapacious Queen of her. Notwithstanding, it’s a subtle and tender performance – not that you’d guess it on first glance – and one that’s memorable for all the right reasons. She epitomizes one of Brecht’s best observations: “First comes a full stomach then comes ethics.”

Fresh from the relative ordinariness of the Russian Revolution and Dr Zhivago, Lucy Maunder taps into Polly’s fount of youth and zealous integrity with wide-eyed ingenuousness and that lovely voice. She represents her ghastly mother’s petit bourgeois aspirations, whether she likes it or not, and makes more than it deserves of the show’s least interesting but vital role of the ingénue.

The rest of the cast is also very fine and achieve a rolling flow of vocal and visual ensembles that thrill the ear and eye, particularly Dimity Shepherd's soaring neo-cabaret-operatic solo. With lighting designer Paul Jackson’s splashes and slabs of light and tone, set designer Peter Corrigan suggests both the art of German Impressionism and something of the Bauhaus. There’s a roped boxing ring and mobile built geometric shapes signifying whatever is required in the moment. Costume designer Anna Cordingley eschews the more often-used raggedy glitz of 20s Berlin nightlife for a heightened colour range, circus-carnival style and burlesque white-faces. It seems to point to and complement the deliberate disjuncture between the book and lyrics, poetry and prose in Raimondo Cortese’s text and the wittily localised lyrics by Jeremy Sams. Director Michael Kantor has wrangled a literally fantastic assemblage of larger-than-life performance, music and drama. In this instance the sound and fury signify a lot.

In the pit, conductor Richard Gill leads the Ensemble Weill through the score that he describes as “bittersweet, with a strange emphasis on the bitter.” And, actually, his own program notes are worth a fuller quote: “The music in The Threepenny Opera is never mawkish, cloying or schmaltzy. It is often tender, always strongly melodic and exists within the play as a thread, which unites the whole work. In this sense, this work is truly operatic.” Absolutely. And this production fully lives up to the demands of its original creators and Maestro Gill. It’s a wonderful show.