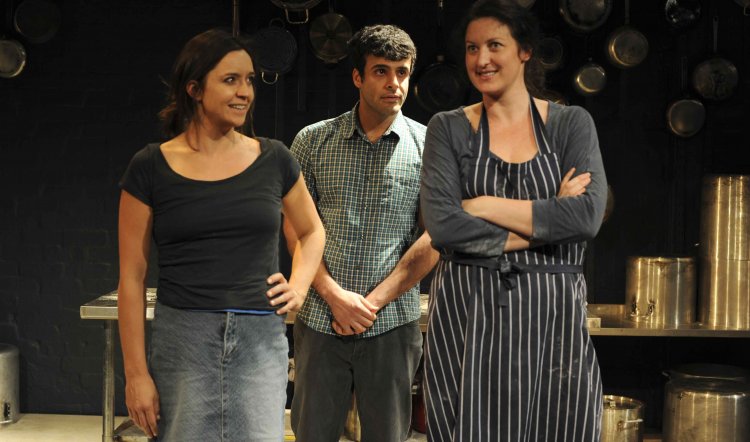 At first thought, the combination of Kate Champion and Steve Rodgers is an odd one. Champion is the rigorous creative mind at the heart of the highly successful theatre-dance company Force Majeure; while Rodgers is a popular larrikin actor and a playwright whose third work of substance this is. But as any good cook knows, sweet and sour, hot and salty, smooth and crunchy are actually the combinations that fulfil the hopes and dreams of most hungry people. And if you're hungry for an often startling and ultimately scrumptious night in the theatre - this is the dish for you.

Enough with the cooking references. Food is a remarkable new work. At 90 minutes non-stop, it swings along playfully, initially disguising its darker purpose until the unsuspecting viewer is sucked in by the jokey facade. The premise is simple: Elma (Kate Box) toils away in the kitchen of the family roadside takeaway cafe, churning out Chiko Rolls, chips and more chips for an indifferent yet hungry clientele. She's done it dutifully since her mother's death, while her younger sister Nancy (Emma Jackson) flitted off to better things. Now Nancy's returned, reluctantly, to work as the waitress but she has ideas.

They should capitalise on the public fancy for "home cooking" and Elma's skill with such hearty delights as fish pie, lamb shanks and corned beef and go after the tourist market - giving them a taste of old fashioned Tassie. Elma and Nancy have a lifelong history of teasing and antagonism. Nancy's flighty take on the serious side of life (getting up in the morning, for instance) has irked her lonely and rapidly souring elder sister since they were small. She is hard to convince and the rancour between them is a palpable presence.

Enter the catalyst for change: they need a kitchen hand to help with the extra work and Hakan (Fayssal Bazzi) is the only applicant. He's a recent migrant from Turkey and not what either is expecting or can cope with. His English is as flowery as rose water and his outlook on life as delicious as Turkish Delight; they have no choice but to take him on and soon they are dishing up more old fashioned country style dinners than they know how to count.

That's where the simple and possibly predictable stops. What happens next is not the obvious, however, and how the story plays out is as unanticipated as the dreamlike segues to stylised dance movement that punctuate the work. A drunk scene (hilarious), a battle between the sisters (powerful) and a love scene (beautiful) are interwoven with a script and characters that are at once straightforward and poetic. A sequence where the merry restaurateurs hand out samplers to the audience is a joyous coup de theatre - especially if you're lucky enough to score a chunk of Bourke St Bakery sourdough, minestrone from Love Supreme or red wine from Cellarmasters.

The undercurrents elevates the play above merely rollicking, however, and Elma's habitual reliance on lists of favourite foods to ward off her fears is only funny until her fears become apparent; and Nancy's apparent carefree attitude to casual sex plays a similar and disturbing role in her life. Sex and food are not always what they're cracked up to be.

The wild stylistic mix shouldn't work but, in these excessively talented hands, it does. The gentle boldness of its execution is compelling and logical. The set (Anna Tregloan) is an inspired evocation of an industrial kitchen - all huge stainless steel pots and and chopping surface. The back wall is festooned with pots and pans and the effect is magical when they reflect projected images (Martin Langthorne).

Food is a show about the extraordinariness of everyday lives and the everydayness of the extraordinary. Rodgers and Champion have devised and pulled off a remarkable success, while Jackson and Box, in particular, have never been better and Bazzi reveals himself as a fine comic. It's a delightful hour and a half - already extended - beg, borrow or nick a ticket.