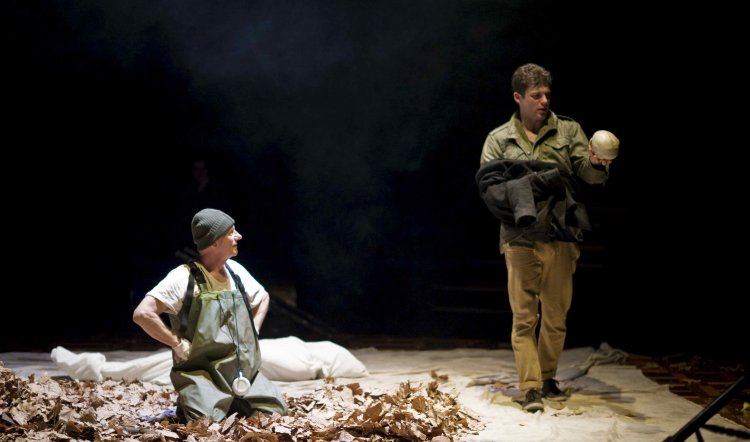 I believe this new production from Sport For Jove is the best Hamlet I've ever seen. And also, Lindsay Farris's Hamlet is the most electrifying, memorable, sustained and intelligent realisation of the tragic Prince of Denmark I've ever seen.

Catching up with the play at a 1pm schools' matinee was thrilling in itself as the audience of young teenagers was rapt and silent throughout. Many sat forward in their seats for much of the hour and 40 minutes running time; and not one person left for a pit stop or felt compelled to scuffle in packets of Cheezels for the sustenance usually required during such a marathon. From the quavering fright of the opening question: "Who's there?" director Damien Ryan grabs the play and its viewers by the scruff of the collective neck and doesn't let go.

The intensity of this tightly scripted production is extreme and emanates from Farris's innocent menace as the young prince. He is heedless of his friends, yet his charm and affection for them means they love him as much as fear him. While insulting his usurping uncle Claudius (a slippery and duplicitous James Lugton) and his mother Queen Gertrude (Danielle King playing fast and loose with maternal and wifely duties), he also unnerves, confuses and amuses them with his endearing cheek and wit.

Humour plays a big part in this Hamlet. There is much laughter, the occasional squeal of surprised delight in the audience and the cast makes the most of their opportunities to enhance the journey with jokes and fun. The result is an ever more poignant and pointed tragedy and growing sadness as both Hamlet and his love, Ophelia (a fragile and heartrendingly youthful Eloise Winstock), begin the inevitable slide to emotional and physical doom. A key part of the production's power also resides in John Turnbull as Ophelia's father Polonius - a startlingly plausible modern mandarin with his listening devices and phone hacking habits. In contrast, he is a merrily macabre Gravedigger in the famous yet freshly renovated scene where poor Yorick features silently yet centrally. 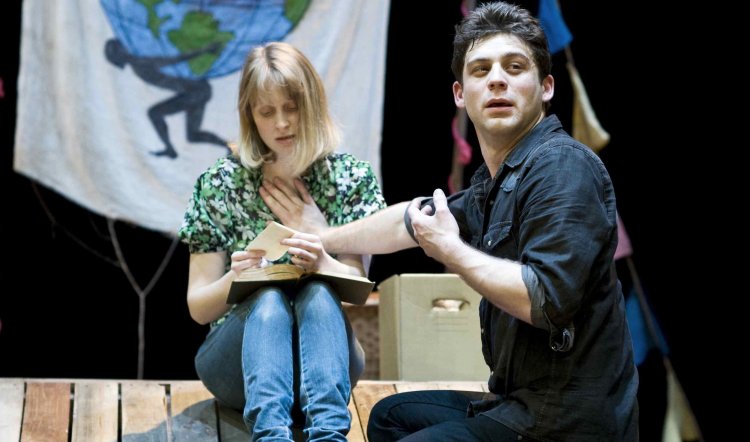 The wonderful thing about this Hamlet is its freshness: the fabled lines and speeches that form so much of our everyday language are delivered as if the ink were still tacky to touch on Shakespeare's first version of the script. Each actor - including Takaya Honda (Horatio), Christopher Tomkinson (the Ghost, First Player and Gravedigger), Christopher Stalley (Laertes, Guildenstern) and George Banders (Marcellus, Guildenstern) - seems to approach his or her character as if no other actor has played it before. It's a remarkable achievement.

The final links in the circle of excellence are the set (Lucilla Smith), lighting design (Toby Knyvett), sound design (Caitlin Porter) and costumes (Anna Gardiner). The unforgiving cavern of the York Theatre, with its three sides of raked seating looming over the stage, has been simply transformed, with a series of plain black drapes, into a space that's at once more intimate and also suggests the gloom of a draughty Danish castle. The stage is also transformed with a centre circle that's more marquetry than parquetry which, with lighting changes, becomes a forest glade, the great hall of Elsinore, the graveyard, a windswept place of nightmares and wild imaginings and - in the wittiest use of light and space - a breach of the fourth wall that makes Hamlet and his audience co-conspirators in his inner thoughts. Meanwhile the soundscape is sparse - tramping marchers, distant seagulls, snatches of music - but also adds colour and depth to the goings-on.

Finally, the other notable treat is a program essay, no byline, "for students and teachers of the play" that is beautifully written, thoughtful, illuminating and worth reading whatever your status in the theatre. In the end I left the theatre thrilled and grateful for a truly inspiring experience. Damien Ryan was responsible for Bell Shakespeare Company's most recent schools' show - Romeo and Juliet - and that was splendid too. If Bell's chief John Bell isn't looking at Ryan & Co as the next generation to take over, he probably should be.