These two are heard at intervals throughout Porn.Cake as the disembodied but essential voices of our western culture of food porn. It's the commentary to a quartet of people - couples but with precious little coupledom left - approaching 40. While those who've already reached this milestone know it's actually the new 30, it doesn't seem so benign on the way there. For Ant (Glenn Hazeldine), Annie (Georgina Symes), Bill (Josef Ber) and Belle (Olivia Pigeot), it turns out to be a series of luscious butter-iced cakes out of which burst not a pneumatic popsy, but their worst imagined fears of modern life: non-communication in a world of communication devices and demands.

Again, this isn't a new idea, but Bates and director Shannon Murphy, with designer Justin Nardella put an original spin on the concepts and turn up some deliciously farcical moments. The setting is the key: a close-carpeted "conversation pit" so loved by 1970s home decor magazines in which nobody sat and in which nobody had a conversation of any note whatsoever. The walls of this unpromising place are decorated with bilious Marion Hall Best-style drapes and the overall effect is about as comfortable and homely as a cake rack. 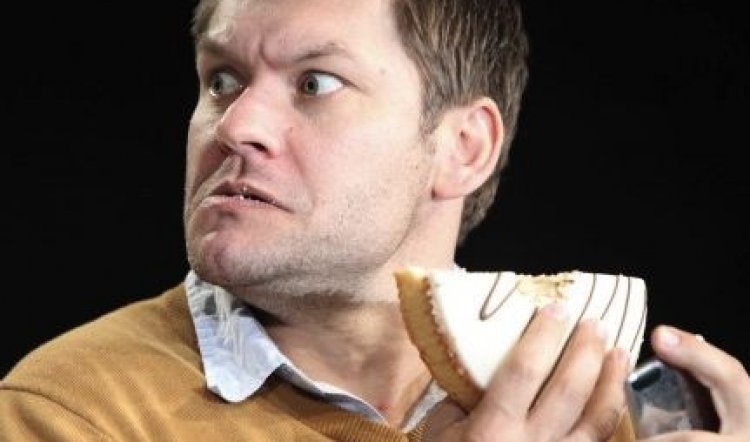 Within this place the four live out the disjointed misunderstandings of long-term relationships gone flat. Bates plays with a number of approaches, beginning with the way repetition can colour and skew how we hear and accept (or not) a statement; how comedy is almost always teetering on the edge of something much darker; and how the dark side can so easily be turned to farce. Bates also has a sardonic ear and eye for the value of the fridge magnet, when spoken inanely and in earnest: "Confusion is the new love", "Love is the new Google" - and so on.

Each member of the cast is strong, but Hazeldine, as a rather forlorn fellow who actually falls for an internet lottery scam, and Symes, who is simply a stand-out performer, have the best of it. Porn.Cake is out of the ordinary, entertaining and, with some stiffening and editing of the occasional saggy bits, would be as fluffy, elevated and rich as any of the dozen or so decorated sponge cakes that punctuate the action.