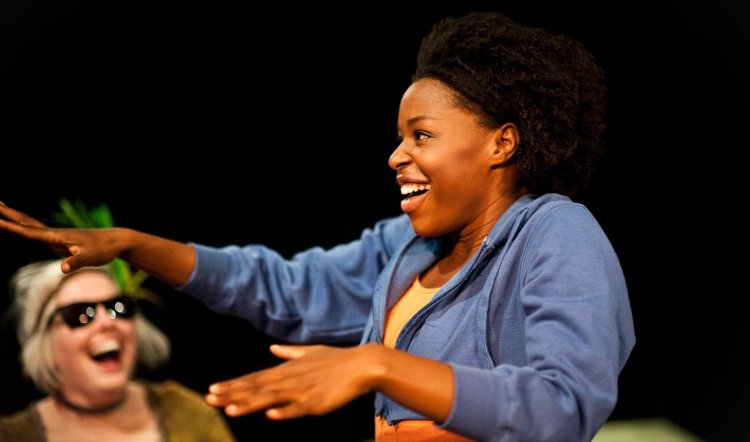 The call centre is traditionally the first resort of the "resting" actor and it's only surprising that a play has not come out of one before this. That it is a surreal black comedy - by Chris Aronsten - says a lot about what must be one of the least humanly satisfactory workplaces ever devised.

To help them survive their dreary days, the inmates are busy devising a play with the intent of carrying off the main prize in a competition. In between dodging manager Martin (Gerry Sont) and assisting members of the public to book theatre tickets (!), the co-writers engage in various ploys to avoid work and also, ironically, avoid finishing their sections of the play. Procrastination rules, as ever.

Kate Gaul is a fine director. Her previous Siren production, The New Electric Ballroom by Enda Walsh, was splendid; but she struggles to pull together the grab bag of ideas and characters flung together in this one. It's almost as if it had been devised and written by the disparate mob of malcontents we watch: eccentricity, slapstick, witty moments and some scintillating performances are all present, but they don't make a coherent whole.

As the deadline for submitting the play looms and the digital read-out indicates more and more unanswered calls, the pace quickens and each character is exposed to the spotlight. Actress-in-the-middle-of-going-nowhere Catherine (Angela Bauer) has some sharp moments; the aggro hip-hop lesbian comic Fran (Branden Christine) is even more watchable and Felicity and Simon (very funny Briallen Clarke and Sonny Vrebic) make the most of the disloyalty a couple can experience when one is more successful than the other. Frustrated writer Chris (Shaun Rennie) finally gets to sing in the show's unexpected finale; before that Bali Padda steals every scene he's in as the office cleaner, Ali. He makes up for Sont, who is wooden in the extreme.

Despite the best efforts of the cast and director, the play remains a collection of bits and pieces that are more or less funny, most often less. And it's an uncomfortable but illuminating irony that The Lunch Hour opens at the same time as Toby Schmitz's I Want To Sleep With Tom Stoppard. Each play demonstrates - from opposite ends of the spectrum - how difficult it is to write comedy; and how wonderfully rewarding it is to get it right.

On opening night at Darlinghurst the roars of laughter were recognition from actors in the audience who've experienced much of what happens on stage in The Lunch Hour, although surely not the excruciatingly unfunny business with the paper-spewing printer. It was easy to identify those who have never worked in a call centre: they were the ones resembling Easter Island statues.