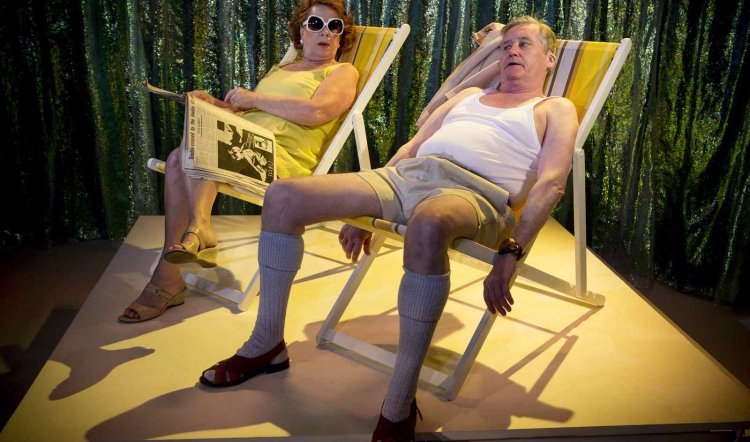 Recent history and social change have conspired to enhance and re-focus the richness of John Romeril's wonderful play of 1974; and Sam Strong's fine production confirms both its classic status and its relevance for new generations in 2013.

On the surface it's almost a comedy - WW2 veteran Les (Peter Kowitz) and his lovely wife Irene (Valerie Bader) embark on a wedding anniversary gift trip. It's an Australian Women's Weekly Cherry Blossom Cruise to Japan - a concept even more comical now than it was in the 1970s, when every other Beryl and Fred were travelling overseas under the comfy wing of the world's most successful women's magazine.

But like so many WW2 survivors, however, peacetime and winning the war turned out to be not all they were cracked up to be. When Les is served a beer by an Asian crew member (Shingo Usami) the man morphs into his Japanese captor at Changi. And a neatly-moustachioed fellow passenger (Tony Llewellyn Jones) is not only a stiffly hearty Englishman but also "Robinson, Royal Navy. Vice-Admiral. Retired," with all the class distinction implied in his ramrod back - albeit clad in a Hawaiian shirt.

As Les's bonhomie begins to unravel into alcohol-fuelled paranoia we are reminded, obliquely, that forty years ago many WW2 veterans were struggling. They found themselves in a world where "winners" such as themselves - survivors of Changi, the Burma railway, Hellfire Pass and so on - were having to contend with the defeated Japanese as they rose - industrially, economically and materially - in the new world order. Suddenly, the hatred still harboured by the inwardly bleeding and tortured Les's was old fashioned and unacceptable. Raging against the Nips and their barbaric behaviour was supposed to be left on the beer-sodden carpet of the RSL and only brought out with the two-up on Anzac Day.

At the same time - beyond the theatre and far from snoozy Australia - a new Asian war was underway. But unlike the easily understood raison d'etre of WW2, it was a sneaky, nasty, incomprehensible war. And as it was basically an extended guerilla campaign: always going to be unwinnable. It was against this background that John Romeril set his deceptive, perceptive and far-reaching exploration of an aspect of war that we are only now - in 2013 - really beginning to grasp.

What no one knew - or would acknowledge - back then was that the psychological effects on some veterans of WW2 (and Vietnam) would turn out to be even more devastating than bullet wounds. Finally identified and named: PTSD - post-traumatic stress disorder - but not before thousands were devastated for life and not before many, of the Vietnam vets in particular, eventually became under-the-carpet casualties of war through suicide.

It has to be said that to the public at large even now PTSD is still something of a mystery and a bit suss. Perhaps a New Age, wiffy-waffy excuse for someone who really ought to buck up and get on with it, like Granddad did. Except, of course, what The Floating World reminds us is that Granddad didn't necessarily. It was simply that no one spoke of it, no one took responsibility for helping the sufferers and many became like Les - and worse. Through the character of Vice-Admiral (rtd) Robinson we are reminded that Australia inherited a version of the British stiff upper lip - any whiff of psychological illness just needs a white feather waved at it and everything will be wacko the duck.

Fortuitously, the week of The Floating World's opening was also the week when the second half of a film for the ABC's Foreign Correspondent was aired. Made by Sally Sara and producer Marianne Leitch and titled Coming Home: Combat Doctor, it documents through Canadian trauma surgeon Major Marc Dauphin, in straightforward if harrowing language and images, exactly what PTSD is.

Now, thanks to the work of a number of high-ranking Canadian veterans, PTSD is recognised as an illness and in the film, crucial aspects of Les's story are discernible: Dr Frank Ochberg, an army psychiatrist says, "I had a friend of mine, asked his patient, 'when were you last in Vietnam?' And he took a while and he said, 'Last night.' So it lingers. It has a grip. It's the point of understanding PTSD, the past feels like the present. There's a different physiology.

"The brain lights up as though it is dealing with smells that are still there. The brain dials it up and my point about all of this is it's medical, it's physical - this is not simply an extreme of being nervous and there was nothing wrong with you in the first place to cause you to experience this. But we really have to make it clear that if you come back from battle with classic, diagnosable PTSD, it's an injury just like having shrapnel in your abdomen". 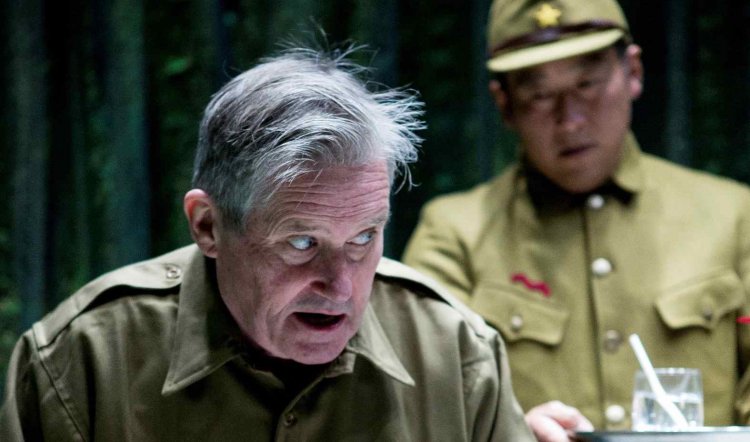 Lt General, now Senator Romeo Dallaire was commander of the UN peacekeeping force in Rwanda during the 1994 genocide. It took ten years of therapy to recover. He told Sara, of PTSD: "Unless they recognise that this injury is equivalent to any other physical injury, you'll never get rid of that stigma and you're going to be walking around with a bunch of soldiers that are nothing more than time bombs."

Sally Sara also interviewed Dr Bill Nash, US Marine Corps psychiatrist, and he pinpoints the exact reason why PTSD afflicts some and not others - including the fictional Les and the real Marc Dauphin: "Before I went to Iraq, I believed like a lot of other people believe that it's - you know - danger to one's own life that causes trauma - but that's not what I heard from these guys and they … their lives were in danger every minute of every day. But that wasn't what traumatised them, it wasn't what bothered them day and night. It was when they failed to do something that they counted on themselves to do and they failed to protect their buddy, failed to keep someone alive and the medical people were hugely vulnerable to this.

"I found that the medics were more likely to be treated for PTSD than the marines who were the trigger pullers and I realised in treating some of them, and ... their trauma is failing to save lives. Failing to do what they trusted us to do".

Finally, Senator Dallaire tells Sara: "This is a potentially terminal injury. People die of this injury. It might not be next week but it can be at any time. When we have this injury we don't know whether it's next week, two months, two years, some noise... some argument... some scenario could trigger us into a response that is uncontrollable and terminal."

Extraordinarily, John Romeril's perceptive creation of daft old ocker Les embodies all the above. Les comes apart because he suddenly remembers; and he remembers he failed. In Changi he was helpless, unable to help his mates, unable to prevent them dying of wounds, beatings, disease, torture, hunger, despair. He survived and, in the apparently unlikely setting of the Cherry Blossom Cruise, his guilt bubbles to the surface in ways neither he nor anyone around him can understand or cope with.

The nightmare is enhanced by the way the cruise is portrayed: "the floating world" - "Ukiyo" in Japanese - is traditionally a place of refined pleasure and entertainment: geisha, kabuki, tea ceremonies. But on the Aussie liner (actually a converted troop carrier - ouch) the entertainment director (Justin Smith) is a man of excruciating vulgarity. His entendres are treble rather double and he is the polar opposite of ukiyo. Kelly Ryall's score punctuates his antics and links him with Justin Stewart Cotta - a merrily menacing presence as a one-man-band of electric organ and exclamatory cymbal and drum - when's he's not embodying Les's guilty sorrow as the ghost of his Changi mates.

Set designer Stephen Curtis and lighting designer Verity Hampson have done away with the original ideas of encroaching jungle and ship superstructure. Instead, the Stables' tiny stage is clean and white - a dream or a nightmare, depending on your frame of mind. It allows this wonderful company of actors to fill the space with their at once powerful and subtle presence.

Central to the action is Peter Kowitz who has probably never been so stretched by a role and rarely so effective. Valerie Bader is heart-rending and funny as the simple, malaprop-spouting wife. Her bewilderment grows in parallel with her husband's - and tragically, they are destined never to meet in understanding. All in all, The Floating World is a great achievement for the entire creative team and it should not be missed. It's one of the best productions of the Sydney year.