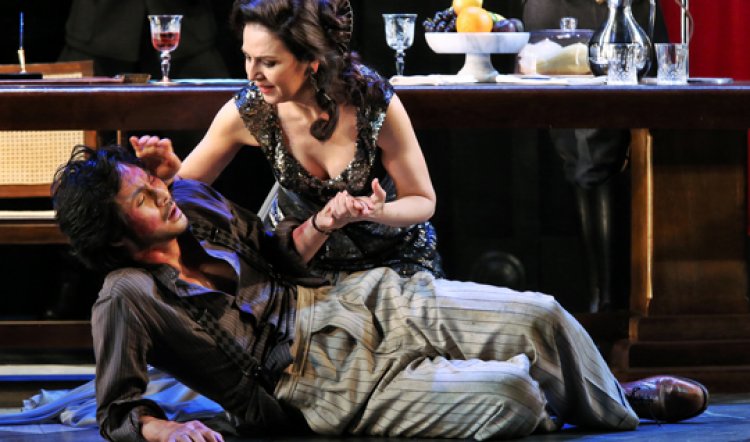 What a difference three years make. In 2010 director Christopher Alden's updating of Tosca to a generic Fascist dystopia so alienated star soprano Cheryl Barker that she withdrew from the production. Subsequently, despite the dazzling Australian debut by American diva Takesha Meshe Kizart, some subscribers in Melbourne and Sydney threw full-scale tantrums that required artistic director Lyndon Terracini's personal intervention to hose down. The production was unceremoniously junked – amazing. (I thought it was wonderful, by the way, but…)

No opera company of any note can be without a Tosca in its repertoire however, so 2013 brings another new version. And this one has already found favour with the Sydney winter audience. It's opening night on 6 July generated that rarest of events: a standing ovation for cast and creatives. And it's easy to see and hear why. Released by Bell Shakespeare Company to direct the piece, John Bell has scored a career triumph with this realisation of Puccini's masterpiece; he's also drawn rich performances from his cast and great work from the creative team.

Set in the WW2 Rome of Roberto Rossellini's classic movie, Rome, Open City, it's as if Puccini foresaw that terrible era and its events, rather than this being an updating from the original Napoleonic setting. It makes sense of the drama and undercuts the melodrama that lurks in "historical" readings of the piece.

Michael Scott Mitchell's three sets – the church where Cavaradossi is painting the contentious portrait of Mary Magdalene that ignites Tosca's jealousy; the commandeered palazzo where Scarpia and his men are billeted, and the grim barbed-wire draped prison yard of Sant'Angelo – are at once theatrical and authentic. Teresa Negroponte's costumes are perfectly attuned to the concept: '40s chic for Tosca, a louchely elegant suit for Cavaradossi; sickeningly attractive Nazi uniforms for the oppressors – including Scarpia's reptilian glamour – the Toytown bravado of their Italian military allies and the sadly contrasting drab of the hapless escapee Angelotti and the Jewish refugee-townsfolk. Wonderful. The only not-quite-right aspect is the overly bright lighting of the church (Nick Schlieper) which, in wartime Rome would surely have been even gloomier and more shadowy than today and definitely not throwing the dazzling reflections from the baroque marble and gold.

Meanwhile, apparently the Pom pundit Norman Lebrecht has poo-pooed the entire WW2-Nazi setting as "amoral". That's bizarre as he not only hasn't seen the production but is also therefore unaware of how the story's essential amorality is now central to the telling with absolutely no effort or energy expended in so doing. The man is an ass – and in critiquing from afar – an amoral one at that. 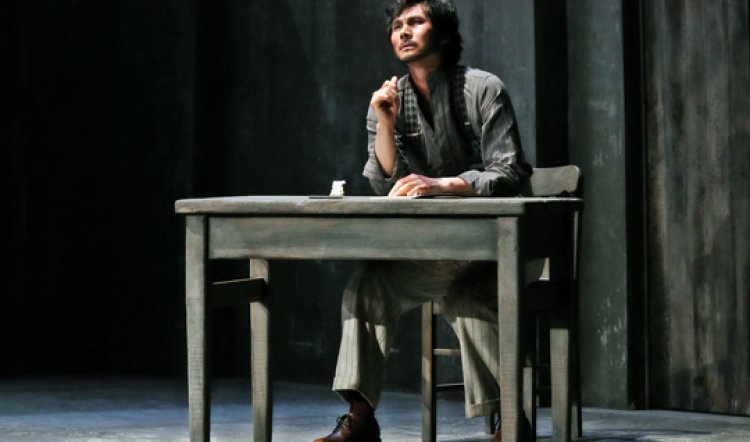 There can be no argument about the singers, however. First time visitors Yonghoon Lee (Cavaradossi) and Alexia Voulgaridou (Tosca) are magnificent. South Korean star Lee is blessed with an heroic and handsome appearance and a voice that would make angels cry. It is at once controlled, thoroughly emotional and he is at one with his role – a thrilling debut with the company. The same can be said for Greek diva Voulgaridou: her overarching moral and emotional dilemma – save her lover from torture by giving in to Scarpia's sexual demands – is in stark contrast to her more simple jealousy and love for Cavaradossi; the girl and the woman are clearly portrayed.

On the night of 16 July John Wegner as Scarpia seemed to be having trouble at the top of his range – croaks and cracks which might be caused by the usual Sydney winter blight. There were enough coughs and sneezes in the audience to suggest the colds and flu are being shared around as usual. Nevertheless, his acting performance and lower range were as powerful as ever and he is an unforgettable and menacing presence.

The other blight that is definitely spreading is the clapping epidemic. Every time the singers pause for breath or reach the end of a line – wild applause. It's all very well to excuse it and say that people should be able to clap if they want to, but it's inane. It's probably crept in from musical theatre whose producers encourage happy-clappy at the end of each number warranted or not. It's time for OA's management to do a bit of audience coaching – an announcement along with the "please unwrap your lollies, turn off your phones" to ask people to keep their appreciation until the end. As it is Yonghoon Lee was breaking his heart – and ours – in the last act and had to put up with sporadic outbreaks of applause at the most inappropriate places. How embarrassing – welcome to Barbaria.

Gripes aside, this Tosca is overwhelmingly excellent. The supporting roles – David Parkin, John Bolton Wood, Michael Honeyman and Graeme Macfarlane – are strong. The orchestra and chorus under Christian Badea's baton deliver all we've come to expect of them. It's a wonderful night – one of those "I was there, I saw that one" productions. Opera Australia and John Bell – wondrous. And please bring back Yonghoon Lee and Alexia Voulgaridou just as soon as their schedules allow.