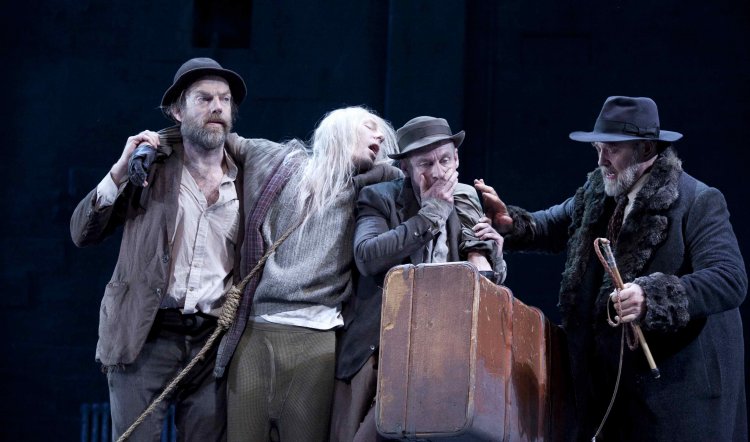 It was a thrilling moment when it was announced last year that Richard Roxburgh and Hugo Weaving would be reunited on the Sydney Theatre stage in Waiting For Godot. These two are not only major screen stars, but they're also wonderful stage actors - not a common combination. But I had misgivings, because the director was to be the man whose idea it had been to cast the two: Tamas Ascher.

Ascher's 2012 production for STC of Uncle Vanya was extremely successful, both popularly and critically, at home and overseas, but going back to my review at the time, my main criticism was that we were treated to: "glittering jewels of individual performances, the focus and energy ebbed and flowed. The principals stepped up to deliver their party pieces - almost solo master classes - that dazzled but did not altogether lend themselves to the common purpose...Perhaps it has something to do with a director and cast having to communicate entirely through a third party. It seems logical that this arduous process is likely to produce a disjointed outcome: some things must surely be lost in translation." So to 2013 and Waiting For Godot.

As you may well have read, an unfortunate injury to the Hungarian director's neck meant the cast (with Philip Quast and Luke Mullins rounding out the quartet and Rory Potter and Otis Pavlovic sharing the role of The Boy) delighted Sydney's headline writers and punsters as they were forced to wait for Ascher when they should have been rehearsing. In the end STC's artistic director Andrew Upton took over - possibly the most fraught and hazardous directing gig of his career to date - and it's a personal triumph for him.

While Ascher's associate Anna Lengyel has been in Sydney for the duration, it's hard to believe that this is not Upton's production in the truest sense as the wit, humour, fluid action and ensemble playing reek of the director's presence. Waiting For Godot was worth the wait and the various hiccups along the way: it's a superb realisation of  Samuel Beckett's play of the 20th century.

Set in a ruined theatre-within-a-theatre where trees have invaded, grown and been apparently blown to bits along with all life and colour (set Zsolt Khell, lighting Nick Schlieper), the opening moments are as light as can be  leaving space and depth for the weight of sadness that must follow. Richard Roxburgh's Gogo wrestles with his boot while Hugo Weaving's Didi capers expectantly, hoping to spot Godot's approach. It's subtle and lovely clowning without a hint of self consciousness or effort. And the two continue in this way, acutely aware of the least obvious way of achieving their ends, spectacularly fluent with the text and each other. 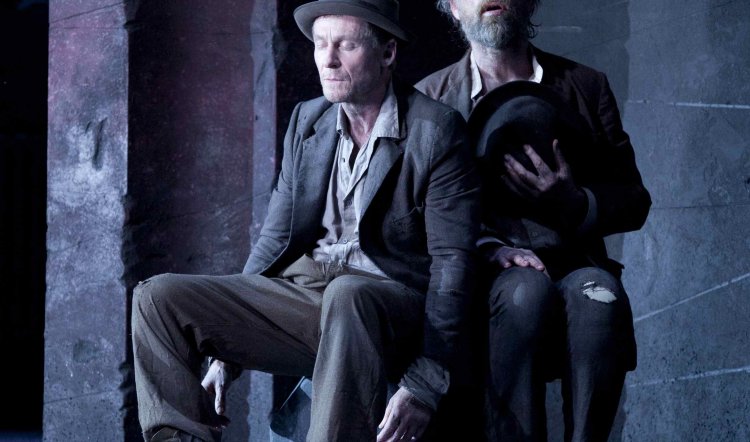 When the hapless Lucky finally appears, reluctantly towing his pompous master Pozzo, it's another kind of magic. Luke Mullins has had a remarkable year already (Angels in America and Small and Tired) and this characterisation of Lucky is another major achievement. His austere beauty - emphasised by long silver-blond hair and whiteface - makes the animalistic slave a thing of pity and terror. At the same time, the essential lightness and laughter is present in his physicality, evidenced in the perfect geometry of his body angled against the rope that ties him to the listing resistance of Philip Quast's marvellous and portly Pozzo, mincing with Dickensian neatness in a visual joke that will stay in the mind for a very long time.

What will also remain is the suspicion that the flea-bitten friends and the two who pass through are actually as smelly and filthy as they look. Alice Babidge has kitted out each man in rotten parodies of the gentlemen they once were or wished to have been and the costumes are horribly splendid.

All in all, in this most famous of plays where everything and nothing is discussed, forgotten and remembered and Godot never turns up, it's a remarkable privilege to see it as if newly written and performed for the first time. It's still as meaningful and meaningless as it was in its first production 60 years ago and as open to interpretation. In the age of ageing, with dementia popping up around every corner to frighten half the audience to death, it's tempting to read into it that particular existential horror. Whatever one chooses to see, however, the fact is there is laughter and humanity at every turn - the darkness being lit by simple acts of hope and kindness. And there are three leaves on the hitherto dead tree.