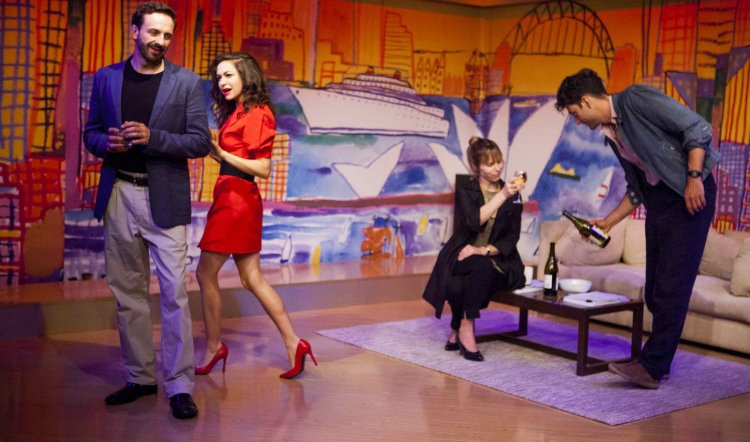 In David Williamson’s Emerald City, Griffin artistic director Lee Lewis has chosen a different kind of “classic” for this slot in the calendar. After the dramas of previous years, notably Gordon Graham’s The Boys (2011) and John Romeril’s The Floating World in 2013, she consolidates the idea with a socio-satirical comedy that gives the audience the chance to revisit or experience for the first time a play that should be recognised as part of the bedrock of contemporary Australian theatre. Yet…

The unnerving thing about the opening scenes is that it’s still as recognisably a portrait of Sydney and the preoccupations of her middle class as it was almost 30 years ago (first staged in 1987). And it’s also unnerving to hear how so many of the truisms we’ve come to accept as descriptions of Sydney life and attitudes were not only first articulated by Williamson but also are horribly and often hilariously unchanged.

The more things change the more they stay the same. In commissioning as set designer that other quintessential recorder of Sydney, artist Ken Done, Lee Lewis had a moment of inspiration that translates into a striking and workable design (with associate designer and costume designer Sophie Fletcher, lighting Luiz Pampolha). Blond wood two-level flooring and a simple cream-coloured couch suggest a spacious, sun-filled penthouse apartment that – of course – overlooks the harbour. The L-shaped back of the Stables stage has become a classic Done harbourscape: the bridge, the opera house, apartment and office buildings, ferries, a cruise ship (a hint of 2014) all in the distinctive and deceptively roughly drawn and vivid, vibrant palette that’s known around the world.

It’s a place and a panorama that symbolise success and aspiration and into it come screenwriter Colin (Mitchell Butel) and his publisher wife Kate (Lucy Bell). They have just moved up to Sydney from Melbourne – at his instigation – and she is not yet past the wrinkled nose stage of despising everything about the beguiling strumpet city.

Colin, meanwhile, has had some success and is highly regarded, particularly by himself. Yet, while he energetically refutes any suggestion that it’s his ambition, the move from the great southern city of culture is a hint that despite protestations, for him art and integrity are possibly not what it’s all about: the harbour view is definitely tantalising. Nevertheless, his latest project has been poo-poohed by world-weary, wisecracking agent Elaine (Jennifer Hagan). A movie about WW2 coast watchers who, she tells him, sat on islands and stared out to sea, has no chance of finding finance or an audience.

Kate too has her eyes on the lofty prizes. She is desperate for her boss to accept a first novel by a young Aboriginal woman. If it were to sell 1500 copies they would be lucky, but for Kate it is an “important” book. 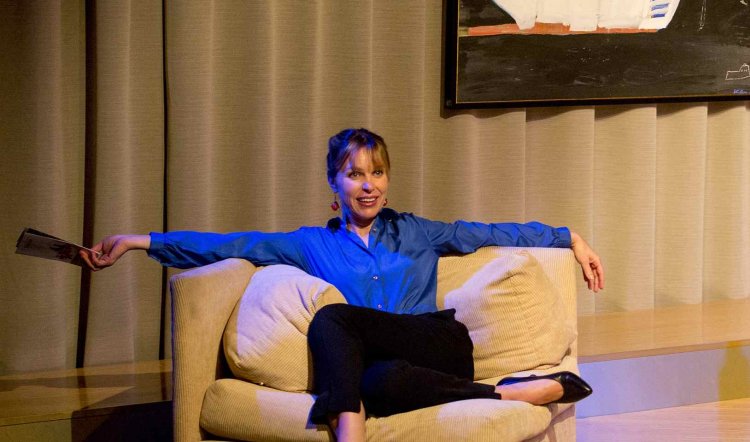 Enter into their lives Mike McCord (Ben Winspear), a shonky hack whose track record is pretty much a work of fiction. Mike is rough as guts and twice as tricky, the antithesis of self-conscious aesthete Colin. Mike brings with him two further possible causes of moral and personal disaster. There’s his girlfriend Helen (Kelly Paterniti) a smoking hot PR flak who has Colin drooling, while smooth merchant banker Malcolm (Gareth Yuen) is the hoped for source of the financial backing the two men crave even more than sex.

Although in 2014 the merchant banker would more likely be a venture capitalist, Emerald City has dated very little. Only in its more extended passages and speeches – so different from the staccato dialogue grabs of many newer plays – does it betray its vintage. And this is not a bad thing; simply different. As well, the play was one of the early adopters – if not the originator – of the acid-tipped barbs that were, and continue to be, fired between Melbourne and Sydney. Its a source of humour that might mystify a foreigner.

Little else about the play’s basics would be a puzzle, however. Greed, ethics, sell-outs, success, failure, sex, betrayal, ideals, cynicism, art and commerce are the ingredients that make up the mix of an entertaining skewering of a group of people that deserve everything they do or don’t get. Lewis’s direction is clear and fast-paced without sacrificing the language or forcing the actors into misplaced farce.

With only a week before opening night to prepare for the pivotal role of the man on the make after the sudden withdrawal of Marcus Graham, it’s remarkable how comfortably Ben Winspear inhabits the character of Mike and seamlessly fits into the ensemble. It is, of course, a tribute to the director and the rest of the cast that they all work so well together. Butel and Bell in particular make convincing separate journeys to the dark side, while Hagan is dry as a martini and relishes the sharper one-liners gifted to Elaine.

If you’ve never seen Emerald City this production is a great reason to do so, and if you did see it way back when it will be a delicious reminder of how entertaining it is.