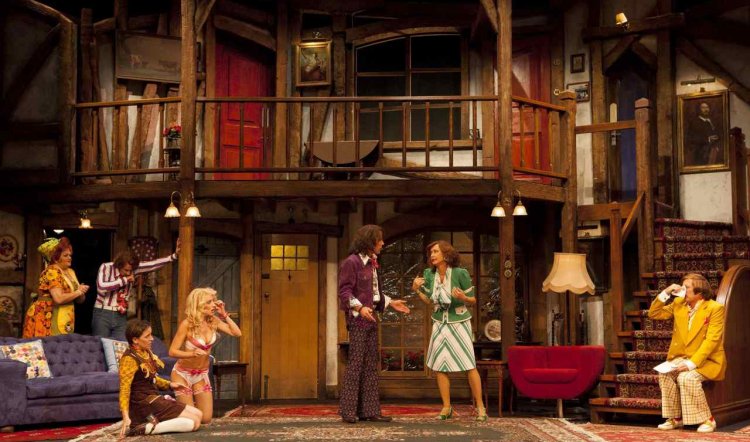 Michael Frayn's marvellous farce Noises Off is one of the best of the 20th century in a genre that is notoriously difficult to create and perform. It's the K2 of comedy - a challenge to the very best that's been taken up by every generation since. The years after its genesis in the 1970s-early 80s have been kind, partly because Frayn has continued to work on it from time to time - updating, cutting, rewriting. And partly because its premise - of a sad, second-rate rep company rehearsing then touring the English provinces in a sad, second-rate farce - means that subsequent productions are gifted with the clothes and hair-dos of an era that style forgot and there is little temptation to make over or modernise.

The consequence of the above is that as the curtain rises (yes, really!) on the setting of a theatre set of a two-tiered, oak-beamed country cottage with more doors than are strictly necessary or plausible (Mark Thompson) there is spontaneous applause. The same happens as the cast gradually assembles, one by one, in a parade of perfectly vile 70s outfits - designed by Julie Lynch while clearly on some kind of hallucinogenic trip.

And then there's the hair. Oh God, the hair. Julie Lynch and longtime STC wig, make-up and wardrobe supervisor Lauren Proietti have plumbed the depths of back-combing, flick-ups, turn-unders, Carmen rollers, Zapata moustaches, blow-dries and sideburns that would make an obsessive compulsive topiarist happy. There may be some younger innocents who might think it's all a bit OTT and exaggerated. Tragically this is not so, as a Netflix to the historical mockumentaries Austin Powers (International Man of Mystery and The Spy Who Shagged Me) will demonstrate.

The story of Noises Off is that Michael Frayn was sitting in backstage on a production of one of his own comedies and realised it was funnier there than out in the auditorium. Rather than retire in despair to grow dahlias he set out instead to write a backstage play. So Noises Off opens with the dress rehearsal of Nothing On, a farce that will soon be playing the high spots such as Stockton-on-Tees and Ashton-under-Lyne.

Enter the venerable sub-Maggie Smith thespian Dotty Otley - playing the housekeeper, Mrs Clackett. As they are both Genevieve Lemon it takes approximately 15 seconds before laughter is rippling around the Drama Theatre. Mrs Clackett has some continuing business with a plate of sardines, a newspaper and a telephone. She also has a voice that is glottal stop Clacton - until consulting with her director out in the darkened auditorium, when she instantly reverts to the mellifluity of Mayfair.

Starting as she means to go on, Lemon maintains this vocal ping-pong game with herself while also juggling props, entrances and exits in a bravura display of comic timing and a deep understanding of what she and the play are up to. She also lets us know via a phone call that the cottage's owners live in Spain (to avoid income tax) and are not here and that if you want to rent the cottage you must contact the estate agent.

Next into the fray is Roger, an estate agent played by Garry Lejeune, played by Josh McConville. He arrives with the gorgeous Vicki who is an income tax inspector with contact lenses and is played by Brooke Ashton, played by Ash Ricardo. They are intent on a little light bonking but are interrupted by Mrs Clackett. Immediately the many doors leading to bathrooms, linen cupboard, bedroom, study and housekeeper's apartment come into play as Roger hides Vicki. The ante and tempo are upped when the cottage's owners, Philip and Flavia Brent (played by Freddie Fellowes and Belinda Blair, played by Alan Dukes and Tracey Mann) attempt to sneak in for an incognito visit.

The rehearsal does not go smoothly. Dotty forgets her lines and cues, Freddie needs motivations and reasons for doing anything and his wife has just left him. Brooke has no interest in anyone other than herself and has a pea brain to boot, while Belinda is intent on channeling Florence Nightingale and being nice. Director Lloyd Dallas (Marcus Graham) has luxuriant Charles I-style ringlets which he manages not to rip out even while dealing with all this and surreptitiously romancing Belinda and dowdy assistant stage manager Poppy Norton-Taylor (Danielle King) whose inner sensitivity and passion for Lloyd promise imminent disaster. 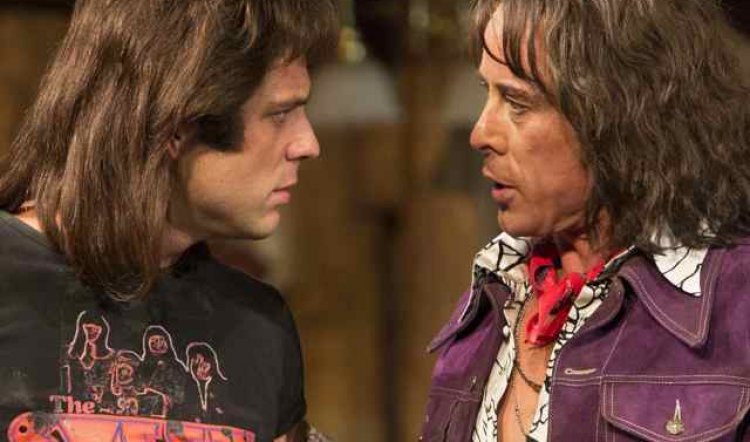 The more imminent peril however, is the whereabouts of The Burglar who doesn't enter until about page 20 and, as played by ancient theatrical gent Selsdon Mowbray, played by Ron Haddrick, is likely to be dead drunk by the time his cue is called. Stage manager and general understudy Timothy Allgood (Lindsay Farris) is summoned, first to fix a stuck door, then to prepare to go on for the emotionally fraught Freddie and finally to stand in for the possibly sozzled Selsdon. Nevertheless, Timothy doesn't miss a beat in his gum chewing ennui.

I do hope you're still with me.

The first half delivers the vicarious thrill of seeing what an audience never sees: the practical mayhem and invisible maelstrom of conflicting needs and demands that make what we finally see as "theatre". It's glorious on all fronts, clever and funny by turn. The second half is the essence of farce - acceleration - as Lloyd leaves to direct Richard III in Aberystwyth and the company soldiers on without him. Mark Thompson's theatre set cottage is spun, in full view, so we end up in Michael Frayn's place - backstage. And Frayn was right - or manages to get it right in the intricate construction of this frenzied action - being backstage is way funnier.

Suddenly the fake warmth and colour of the cottage interior gives way to the gloomy, tacked-together flats and general dilapidation of an old theatre's innards (Nigel Levings' lighting is a witty and intelligent companion to the setting). Nothing On is reaching the end of its 10-week tour and the company is increasingly ragged around the edges. Things are going hideously, hilariously wrong; a whisky bottle enters stage right in the hapless hands of Timothy Allgood and assumes ominous momentum as it is hidden, found, hidden again, found again and then swigged on by various increasingly desperates. Consequently the final performance of Nothing On is catastrophic and funnier than is underwear-safe for some who may have had a drink or two during the interval.

Playing farce is about the highest grasp of technique and the utmost discipline in playing and this cast is superb. Director Jonathan Biggins (as himself) has led his troops from the front as a great farceur and comedian himself. His attention to the tiniest detail of physical and visual business and his theatrical imagination and personal experience have resulted in a feast of farcical fun that dazzles.

It begins as the audience is seated: the show-tape starts with Herb Alpert and continues with the lushly-camp orchestrations of Percy Faith and Henry Mancini. From those opening moments something is happening somewhere on the stage that provokes laughter - one visit is not enough.

Leaving the theatre with aching face muscles listening to Moon River played by Mancini's massed violins is sublime; as is the memory of Josh McConville's extraordinary physical comedic ability that tell us that Biggins has uncovered our very own Michael Crawford (minus the creepy element). And the rest of the company is as brilliant in their very different ways. It takes enormous effort, talent and energy to be this silly - and we're unlikely to see so much of all of it in one place at one time for some long time. Don't miss it.