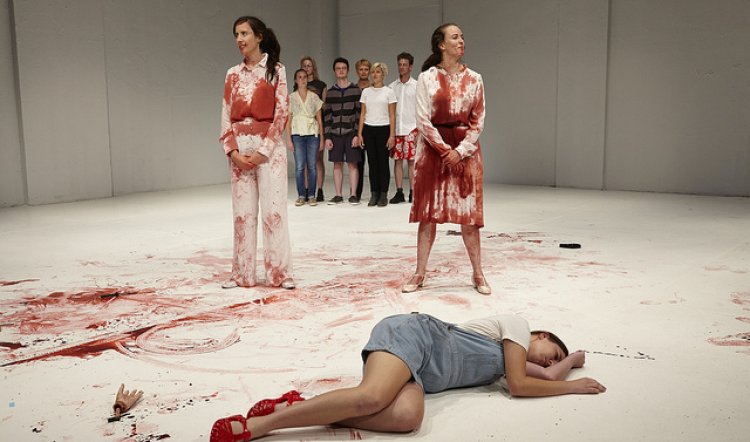 OEDIPUS SCHMOEDIPUS, Belvoir and post, in association with the Sydney Festival at Upstairs Belvoir, 11 January-2 February 2014. Photography by Ellis Parrinder: Mish Gregor and Zoe Coombs Marr (above and right).

ON NO ACCOUNT TAKE YOUNG CHILDREN TO THIS SHOW.

The idea - from the trio known as post - Zoe Coombs Marr, Mish Grigor and Natalie Rose - would have sounded promising. "About a year ago on the south coast of NSW we were surrounded by a pile of books, great plays written as far back as 2000 years ago, looking for the bits about death. We wanted to know more about it."

That last sentence is the one that should have been turned back to the trio before agreements were made to go ahead, however, because there's many a slip twixt initial concept and opening night...

The show is credited: "By post after Aeschylus, Anon, Artaud, Behn, Brecht, Buchner, Chekhov, Coward, Fo, Genet, Havel, Ibsen, Marlowe, Moliere, O'Neill, Plautus, Racine, Seneca, Shakespeare, Shaw, Sophocles, Strindberg, Wedekind, Wilde et al." And it was widely thought that Oedipus Schmoedipus was going to be a night of wit and cleverness along the lines of Anna Russell's fabled speed-sung Ring Cycle or a variation on the Reduced Shakespeare Company's one-hour Bard. And indeed, in the opening scene, Coombs Marr and Grigor, clad in white on a white stage, take the weapons and methods of death from "the canon" and throw them all into a wild mash-up. But...

Although it would appear from the pockets of hysterical laughter in the audience that the graphic if exaggerated killing spree is supposed to be funny, on opening night there were walk-outs during the scene. Frankly, the shocking thing about it was that anyone found it funny - even if some of the laughter was nervous and others may have thought it was a witty homage to Tarantino.

The show's gimmick - or other good idea - is to have a mob of volunteers on stage to fill out the rest of what is quickly revealed as seemingly interminable self-indulgence. While down the south coast - actually in the usually inspirational environs of Bundanon - the post women possibly shared some good wine and started a word association game: pee - peas - island - kitchen island - dead great white male - great white - etc etc and this somehow ended up as a script about death. 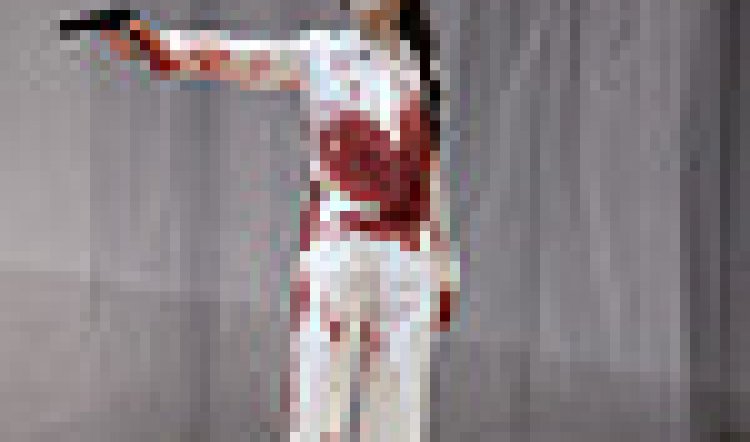 The reason that wine is suspected as being part of the creative process is that not a lot of it makes much sense. At one point Coombs Marr intones that "The greats knew about death and we know about death because they wrote about it and they're dead." Or something like that. If this were a 60-minute, self-funded cabaret playing to mates in a grotty warehouse somewhere, one might be able to get away with such silliness. It would be insulting to school shows to suggest it's schoolgirl humour.

The best part of the show is when, one by one, the volunteers intone some of the most famous death and last lines of all time (reciting from auto-cue screens above the audience). But they are required to do everything too many times and the repetition - walking on and off in various solemn if occasionally comical ways - begins to feel like tooth ache. There are witty and funny moments but they are few and far between.

Natalie Rose scores the most demanding role as a dead person. She spends the entire evening prostrate or occasionally dragged around the stage and manages to neither fall asleep nor snore for the duration.

Oedipus Schmoedipus is a cross between a crappy parlour game and really bad charades. It is a startlingly early front-runner in the Every Breath Stakes for worst show of the year.

CORRECTION: have since been told that Natalie Rose is not the corpse. It's a volunteer - definitely the best performance on the night.