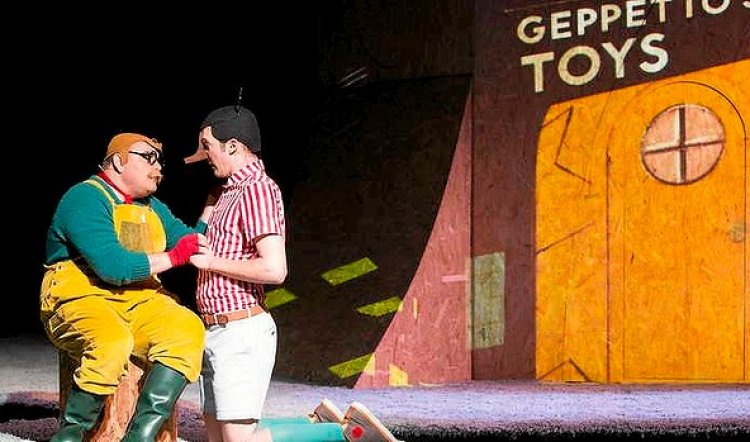 Pinocchio is an intense, yet moving, performance, with great costumes and an amazing set. The set is very cleverly made. There is always a tree in the background and they use it for projections. Even when they are miles away from the closest tree, they always have it cleverly disguised as something else.

The main characters are: Pinocchio, the fun loving wooden boy who dreams of being real (Nathan O'Keefe). Gepetto, the old man who loves carving toys and who just wants company (Alirio Zavarice). Stromboli, the evil, greedy man who wants fame, money and has a cruel heart (Paul Capsis). Kitty-poo, an attention loving cat who becomes friends with Pinocchio (Jude Henshall). Foxy, a grooving fox who, being friends with Kitty-poo, becomes friends with Pinocchio too (Luke Joslin). And finally Blue girl, the happy little girl who can’t remember who she is (Danielle Catanzariti).

The costumes were really good as they describe the characters that are wearing them such as Stromboli, he would wear things that were really over the top and really fancy even if he was going out for a stroll. Gepetto on the other hand looked like he was friendly and happy because his clothes were colourful and bright.

The music which was by Jethro Woodward made you feel that you were in the moment like when Pinocchio was in school it was staccato and bright as he was happy and dancing and jumping around. Yet when Stromboli was after Pinocchio the music was low and dark.

They put a lot of emphasis on the parts where Pinocchio was sad or upset which was intense. They did this with the projections that were black and white and this made it gloomy and sort of scary. When this was happening a young girl beside me climbed on to her mum’s lap and hid her face into her mum so she did not have to look.

I believe that Pinocchio is a very deep and intense play yet has a happy side too. I recommend that children 7+ should watch it. I hope you enjoy!!

Intense - put a lot of emphasis on the frightening parts 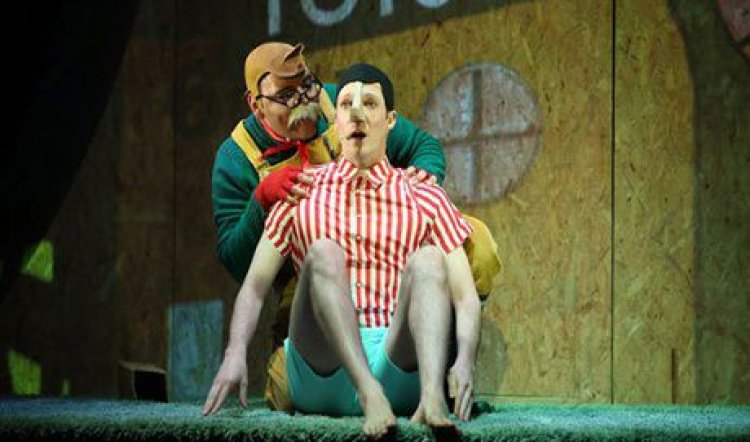 Not sure what age audience they were going for – children friendly parts, and more adult parts.

Starting off: Blue girl is riding bike, crashes into a tree, Gepetto comes along and chops down that tree for wood to make Pinocchio. Then tree starts talking to him saying, make me a pair of legs make me a pair of arms and so on. Though a man called Stromboli comes a long and says that he wants to buy Pinocchio Gepetto refuses so Stromboli hatches a plan to capture Pinocchio.