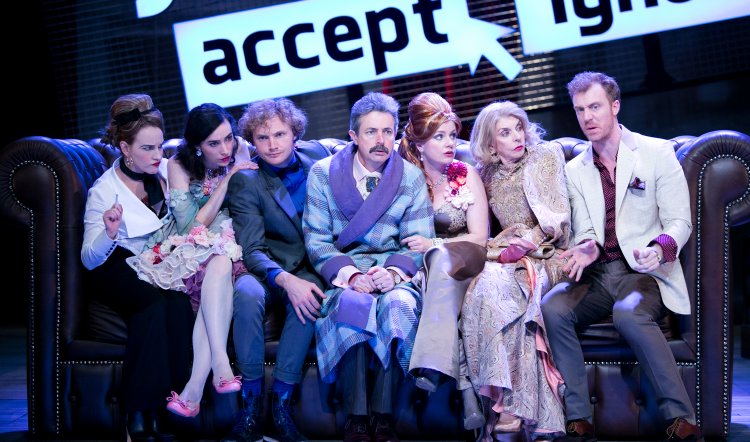 It might present as being lighter than a powder puff, but you can hear the echoes of Bernie Madoff and other charlatans in the tale of gullible merchant Orgon (Sean O’Shea) who falls under the spell of the smooth talking and ostensibly devout Tartuffe (a slimy Leon Ford).

Orgon’s mother, Madame Pernelle (Jennifer Hagan at her imperious best) is delighted, seeing Tartuffe as the solution to the materialism and decadence that blights the home.

It’s left to Orgon’s family and their streetwise maid Dorine (Kate Mulvany) to show the two that their beloved guru is more interested in earthly riches than heavenly ones, and in particular, the flesh and blood charms of Orgon’s buxom wife Elmire (Helen Dallimore).

This is the second time Sydney audiences have seen Justin Fleming adapt Moliere: the first was in 2012 when Lee Lewis directed a rollicking version of The School for Wives. 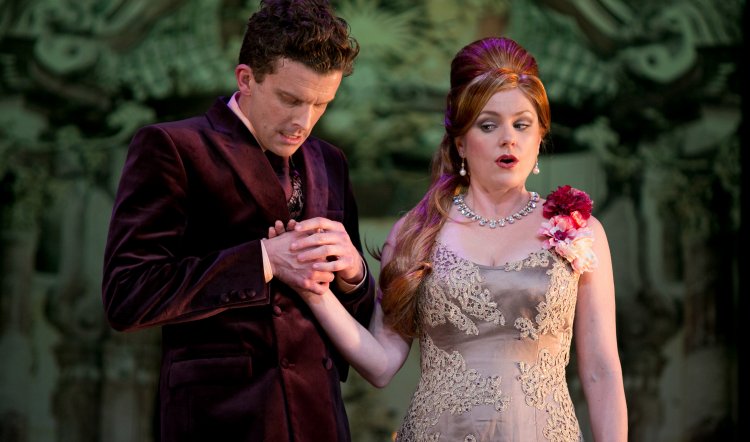 There, the language sometimes didn’t flow as it should; here there’s no such issue. The actors clearly relish the opportunity to twist their tongues around the witty rhymes of Fleming’s script.

Underneath his mop of curls, Leon Ford is quietly effective as the duplicitous Tartuffe, and Sean O’Shea elicits our sympathy as the well-meaning but clueless Orgon.

With impeccable comic timing and a gait like a wind-up doll, Kate Mulvany steals every scene she’s in as the mouthy but world-weary Dorine, and there’s terrific work from Helen Dallimore as Elmire and Charlie Garber as Orgon’s petulant son Damis.

Geraldine Hakewill is very funny as Orgon’s daughter Mariane, seemingly destined to be married off to Tartuffe, while Tom Hobbs as her suitor Valere initially comes on a bit too strong but soon has the audience eating out of his hand due to some inventive interaction with patrons in the first row.

The only false note is Scott Witt (also the play’s movement director), who twitters around the edges of the stage as a put-upon servant just a fraction too long, but comes into his own in the play’s clumsy (and patently silly) deus ex machina.

That this final scene is so well-handled and with such a sublime sense of its own ridiculousness is the icing on the Tartuffe cake. This is theatre that ticks all the boxes, and the two and a half hours whiz by.