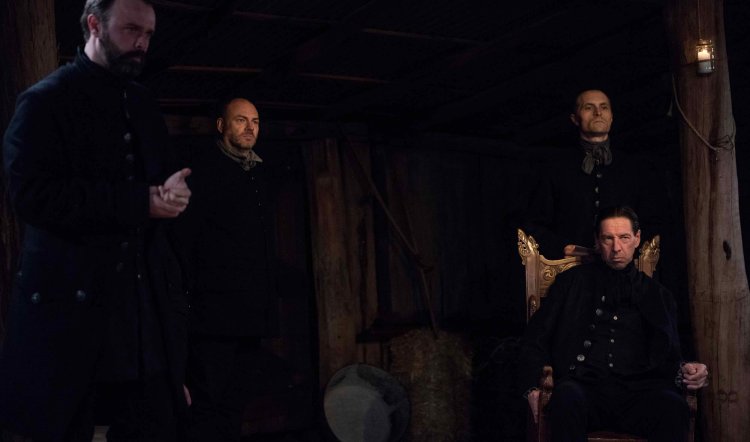 Arthur Miller’s grand yet deeply personal tragedy gets the Sport for Jove treatment, which basically means you can be sure it’s unlike any production of The Crucible you’ve ever seen before. Played out in the round in the picturesque, rough-hewn interior of Mrs Elizabeth MacArthur’s historic barn in the outer north-west of Sydney, the villagers of 1690s Salem, Massachusetts are brought to immediate and vivid life.

Seated close around a layered timber platform on benches, bleachers and folding chairs, the audience is neck-deep in the drama with the company of twenty fine actors. Candlelight and a minimal lighting rig and the scabrous monotone fabrics of their Puritan garb bring home both the hardship and the beauty of life in pioneer America - and Australia -where dust and mud are part of the decor and life was as easily snuffed out as the flickering flames. (A beautifully imagined and executed lighting design by Sian James-Holland; equally excellent stage and costume design by Anna Gardiner.)

Spurred by the growing anti-Communist hysteria in the USA post-WW2, Miller fictionalised events of 1692 when religious suppression fatally collided with ignorance and fear to cause the persecution of (mainly) women who were accused of witchcraft. In a rural, uneducated society where toys and dolls, dancing, musical instruments and even the celebration of Christmas and Easter were seen as the work of Satan, it took very little to set neighbour against neighbour, family against family and frightened and spiteful young girls to successfully accusing anyone and everyone of evil deeds.

When being born with one brown and one blue eye was sufficient to have a woman hanged as a witch, almost anything could be twisted to prove diabolical intent. Being caught dancing in the woods in the moonlight with the black slave Tituba (Suzanne Pereira) is therefore all it takes to send the girls into literal fits of terror and wild allegation.

For her part, Betty Parris (Emma Chelsey) instinctively knows better than to admit anything to her father, the Rev Parris (Matt Edgerton), especially that the girls had briefly stripped off their dour garments and enjoyed the freedom of naked skin, so she maintains rigid, rolling-eyed silence. The doctor, urgently summoned, can find no medical cause: possession and the Devil are the obvious answer, quickly reached. A scapegoat must be found.

As well, jealousy is an unspoken but potent presence as young Abigail Williams (Lizzie Schebesta) cries witchcraft against her former employer Elizabeth Proctor (Georgia Adamson). Goody - goodwife - Proctor previously dismissed the girl after husband John Proctor (Julian Garner) had availed himself of her charms while his wife was ill. Since spurned by the guilt-racked farmer, Abigail not only seeks revenge but also enjoys for once being the focus of attention, no matter the reason, thus proving that neither celebrity nor attention-seeking deficit disorder are new phenomena. 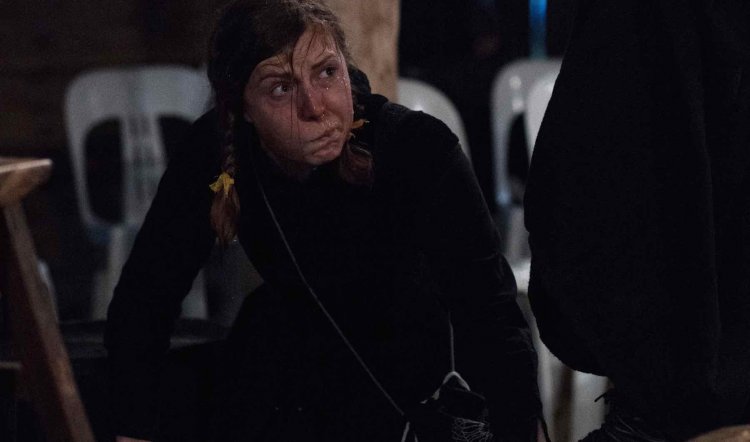 A taste of fame as witness to the witch-finding court is also all it takes for the Proctors’ new helper Mary Warren (Matilda Ridgway) to refashion herself from simple village girl to sharp-tongued and self important miss. She is emblematic of the easy transformation of previously decent folk who wantonly succumb to the pleasure of finally being noticed. Or alternatively to mindless fear and recrimination in the face of the tittle-tattle suddenly turned gospel truth that can lead them to the gallows, or worse.

The terror and its consequences engulf the community in waves of madness epitomised by the wavering that becomes certainty of Goody Putnam (Wendy Strehlow), the daft but deadly pomposity of Judge Danforth (Philip Dodd); the desolation of Francis Nurse (Alan Faulkner) when his good wife Rebecca (Annie Byron) is successfully convicted and the jittery despair, in the face of implacable odds, of the well meaning Rev Hale (Anthony Gooley).

The crucible - a vessel that can survive unscathed while whatever is in it is either destroyed or changed beyond recognition - is Miller’s anti-Communist witch hunt in which he was caught up in the 1950s, as well as the historic one he chooses as metaphor in the play. There is also an unvoiced sexual crucible at work too: a society so utterly oppressed and suppressed is bound for lethal combustion before long. We surely see it today in the sexual abuse of children within the various churches and the quasi-religious.

In the end - in all instances - what becomes clear in the terrible trials and retribution we witness is a quirky truth about original sin: whether it is love, hate, sexual assault or sexual pleasure, once we know it we cannot un-know it. And, by performing the play in the benign and quaintly lovely building that miraculously survives from Australia’s colonial beginnings, director Damien Ryan plays fiendish mind games with us.

Surrounded by the deadly architecture of new suburbia and the Norwest Business Park, before the performance begins our respects are paid to the Bidjigal people who occupied Mrs MacArthur’s vantage point for millennia before she did. Was it a kookaburra or a boobook chuckling in the dark or the ghost of Bidjigals’ greatest hero - Pemulwuy? - the warrior who kept the colonisers in fear for more than two decades because his wall eye and their failure to capture or kill him was seen as evidence of sorcery and witchcraft!

So many parallels and such richness in the play, the performances and the production. It is mesmerising, harrowing and will stay in your mind and heart long after it’s over. And this despite wilfully breaking the spell to take us stumbling out of our crucible to the cool night air to witness the unjust and terrible fate of Rebecca Nurse and John Proctor: rendered less as the blackout at his hanging is spoiled by the lights from the dunny block behind. An unnecessary “oops” in an otherwise brilliant and powerful night. It will, of course, be quite different when it’s restaged at the Everglades in Leura - and a must to revisit.