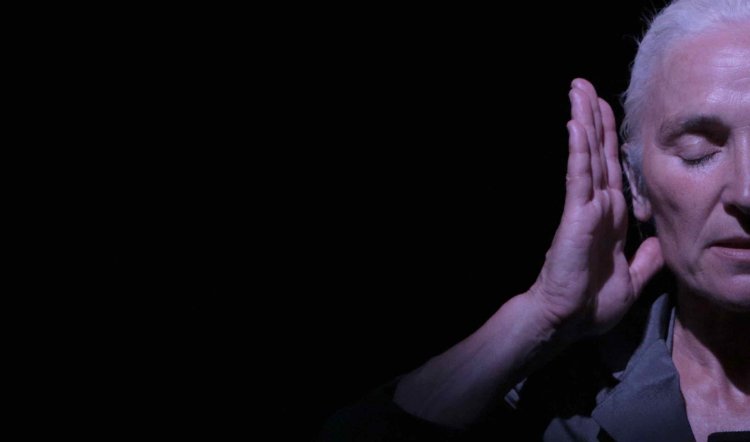 riverrun, Sydney Theatre Company presents TheEmergencyRoom and Galway International Arts Festival in association with Cusack Projects Limited at Wharf 2, 10 March-11 April 2015. Photography by Colm Hogan. NB: the season is sold out but you could try for Suncorp Twenties - available Tuesday mornings from 9am at the box office.)

Irish actress Olwen Fouéré is an arresting presence at the best of times but when she launches into a mesmerising linguistic torrent that is an impression of James Joyce’s homage to a river from the closing, rounding completion of Finnegans Wake, she is irresistible.

Fresh from the 2015 Adelaide Festival and the cavernous Dunstan Playhouse, Fouéré seemed benignly at home in Wharf 2 where she stood on stage and watched the audience arrive and do its audience thing. Dressed in a tailored dark grey suit and neat lace-ups, she could have been the theatre manager, although her handsome face and shock of white hair, pulled back severely in a pony tail, marked her out as a stranger.

In that mysterious way of audiences – talking, laughing, carrying on about anything but what’s on stage or why the gathering in the theatre – the silence that suddenly overtakes all at some mysterious inner lemming signal was particularly marked at the beginning of riverrun because it meant all eyes were suddenly on the solitary figure – still genially half smiling as she watched us.

She knelt to untie and remove her shoes then walked formally to a microphone centre-stage. No ordinary microphone: this one on a curving, snakelike stalk that mirrored the room’s only decoration, an area bounded by an equally sinuous bank-border. On one side, the black floor, on the other, where she walked leaving foot prints in her wake, a light sprinkling of white. Salt. Sand.

There have been some variations on riverrun between its genesis in 2011 as an adjunct to a Bloomsday event and its present state as a 70-minute solo performance. She begins with an uncompromising demand to join her on this journey into the unknown: chanting the Sanskrit call to dawn – “Sandhyas” – using the microphone and sound engineer Benny Lynch to enhance the throat-singing drone that beckons and hypnotises.

Lighting designer and operator Stephen Dodd has assembled banks of lamps at either side of the stage. They alternately bathe and spotlight the single figure, casting dramatic and sensuous shadows and pools of darkness where the imagination of the viewer can play tricks: were there really three people standing in the shadows? Was that really a corn field rich in gold and sunlit? No. There was nothing, well nothing in the sense of something I saw or heard. As I said, Fouéré is irresistible. 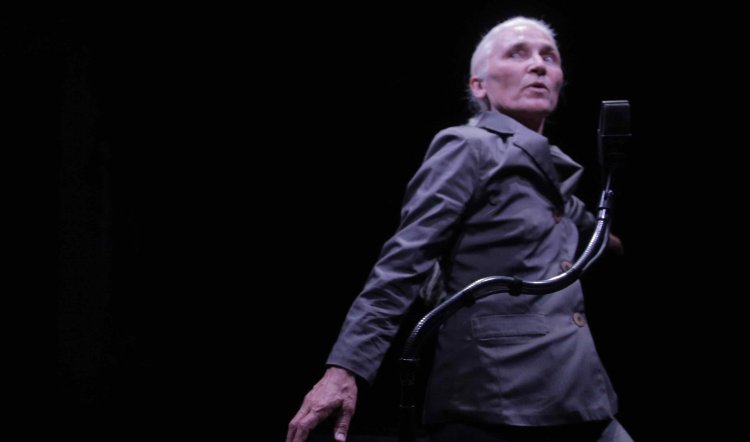 Who has read Finnegans Wake ? Who has tried? Who has dived headlong into Joyce’s seventeen year experiment with language and word games, never to be seen again? Who has stared into a river’s running and both understood and been lost in its mystery? Like the river of life and the Liffey itself, it begins as it ends: at its beginning and end. And that’s what Fouéré achieves, as a performer of extraordinary power and as the work’s adapter and co-director (with Kellie Hughes).

As Finnegans Wake is “famously unreadable” – unless you have and love it – so is riverrun  a work that demands all and nothing: concentration and surrender to its own unstoppable, spellbinding force. Bob like a leaf on its surface, dip beneath into the baffling bewildering runs and plays on words and nonsense. Hear how Joyce’s ear and fancy were taken by a thought or idea and leapt with it, in it, round it, through it and then beyond – tossed out of the whirlpool to a quiet eddy for a moment’s reflection and then back into the flow.

In her program notes Fouéré quotes Joyce in a letter to art critic and rake Arthur Power (from the latter’s book Conversations with James Joyce ) that could be a clarion call to performers as well as writers: “The important thing is not what we write, but how we write, and in my opinion the writer must be an adventurer above all, willing to take every risk, and be prepared to founder in his effort if need be. In other words we must write dangerously…”

Fouéré cuts short the letter here, but for a performer, what Joyce goes on to say is equally juiced: “…what we want to avoid is the classical, with its rigid structure and its emotional limitations. The medieval, in my opinion, has greater emotional fecundity than classicism, which is the art of the gentleman, and is now as out-of-date as classicism in which the scents are only sweet, but I have preferred other smells.”

And to complete the letter and the lesson in writing and acting: “A book in my opinion, should not be planned out beforehand, but as one writes it will form itself, subject, as I say, to the constant emotional promptings of one’s personality.” The same lesson could be taken and read and inwardly digested by an audience too. Sublime.