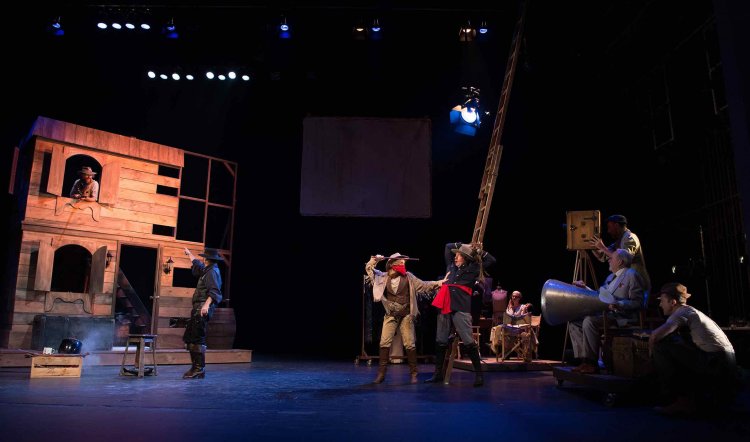 THE TAMING OF THE SHREW

THE TAMING OF THE SHREW, Sport for Jove at the Seymour Centre to 28 May 2016. Photography by Marnya Rothe: above - Danielle King and James Lugton; right Robert Alexander and Danielle King

One of the more thrilling things one can do on a chilly morning is sit in a theatre surrounded by close to 800 rumbustious teenagers waiting for a Sport for Jove production to begin. The various school uniforms identify the girls and boys as public school pupils from around Sydney and that means they’re unlikely to experience live theatre often. It also means their experience of Shakespeare is likely to have been limited to the classroom and most of us can remember how deadly that can be.

So the thrill, while listening to the boisterous chatter and goings-on, is in knowing they’re likely to be about to have a life-changing experience. And in this production of one of Shakespeare’s trickier plays, that it’s been devised and directed by Damien Ryan is reason enough for optimism and excitement – on their behalf as well as one’s own.

Ryan’s The Taming of the Shrew doesn’t disappoint and no wonder it was brought back for a second season after the raging success of the first. There’s an argument that it should be brought back every other year or so – given how quickly each generation of kids grows up and needs exposure to a soaring imagination and a wonderful show.

It’s now over yet again, unfortunately, but if you and your young persons have missed it, or simply want something more to mull over, you could do no better than go to the SfJ website and read the Director’s Notes. (Follow the links – easy peasy.) They’re thoughtful, illuminating and a great read.

The production itself – set on Sound Stage 5 of a silent movie studio some time in the early 20th century – is witty, engaging and, as already said, imaginative. Bianca (Lizzie Schebesta) is a silent screen star of the Gloria Swanson school of intelligent glamour. Her elder sister Katharina (Danielle King) is a furiously free spirit who routinely buzzes the lot from the cockpit of her small plane; this lady’s not for taming. Their long-suffering papa (Robert Alexander) is the King Vidor figure – an uber director and doting patriarch.

Star and heartthrob of the silver screen is Petruchio, the man who will finally persuade Kate to kiss him. Here he is an urbane somewhat older man than usual (think Alan Rickman or George Clooney) and in the person of James Lugton he is also funny as hell. This sneaky trope plus the loads of other genuinely funny business in the production as a whole goes a long way to making us disregard the very sexist business at the heart of the play in Petruchio’s behaviour towards Kate. 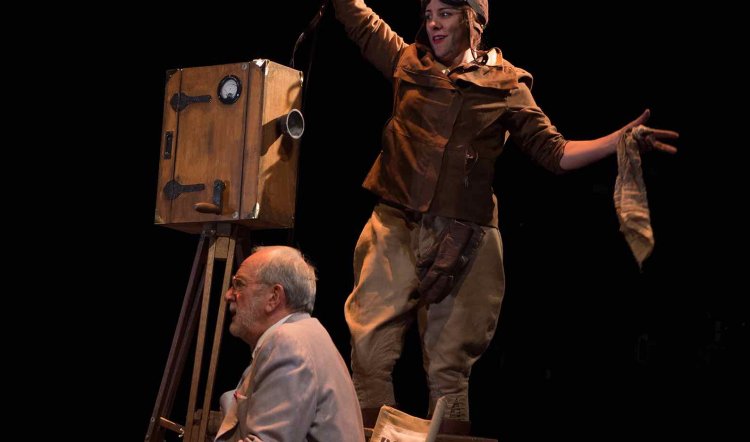 Played out on Anna Gardiner’s cutely clever evocation of an old time film set (lighting by Sian James Holland) it all makes sense from the opening moments – instantly making unproblematic the original setting of Padua and references to Pisa and Verona with snippets of flickering B&W movie complete with speech cards and grandiose “acting”. The resulting virtually seamless melding of new ideas and original play is a real buzz.

Nevertheless, because this Katharina is such a convincingly swashbuckling hero and so logically furious at being required to marry and be a girly girl, her final capitulation (taming) is possibly even harder to take than usual. (The reactions from the 14-year-old girls around us made it very clear they have way more in common with Gloria Steinem than one could hope for in the current political climate. On the way out of the theatre I eavesdropped on a group of girls discussing how they found what happened to Katharine “cringey” – a good description that also says they get it about the women and equality thing.)

So: 800 teenagers were totally rapt in this 400+-year-old play. They whooped and cheered for Katharina’s strength and Bianca’s sword-fighting; they groaned at the snogging bits and roared approval of the wit and wordplay throughout. Their raucous appreciation of the men-as-women and women-as-men seemed typically Sydney and altogether it was a wonderful way to spend three hours.

Mitch Fifield, George Brandis and every other politician that doesn’t understand the importance of arts and culture to the future of this country should be tied to a seat in an audience such as the one described above. It’s a marvellous experience.

Thanks Sport for Jove and Damien Ryan. Thanks to the actors – battling through the racket and laughter to deliver a wonderful, thoughtful and thought-provoking show. Here’s to next year.

And for another take at The Taming of the Shrew, you could read the interview with Phyllida Lloyd in Variety about her production in New York’s Central Park: http://variety.com/2016/legit/news/taming-of-the-shrew-phyllida-lloyd-shakespeare-in-the-park-1201782312/