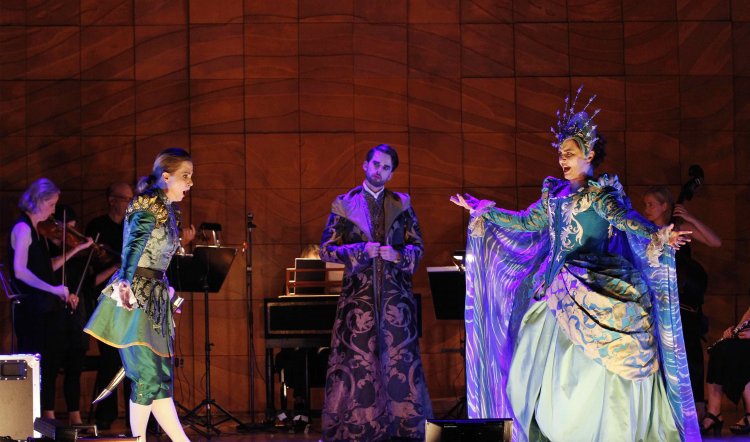 VOYAGE TO THE MOON

VOYAGE TO THE MOON, Victorian Opera and Musica Viva at City Recital Hall, Angel Place, 22-27 February 2016, then Brisbane, Canberra, Perth and Adelaide and to be broadcast at a later date by ABC Classic FM. Photography by Jeff Busby: above - Sally-Anne Russell, Jeremy Kleeman and Emma Matthews; right - Emma Matthews.

Musica Viva has toured the finest music and musicians around Australia for the past 70 years but doesn’t do “new”. In contrast, Victorian Opera – a phoenix risen from the ashes of the VSO in 2005 – has already built a reputation for the new and new interpretations of the old, but doesn’t have the wherewithal to tour. (More’s the pity, getting The Riders to Sydney must surely be on someone’s list of things to do – hello Sydney Festival and Wesley Enoch?)

Meanwhile, MV and VO have combined their discrete skills in a collaboration which augurs brilliantly for the future of such ventures and delivered Voyage to the Moon – produced out of Melbourne and now touring nationally (see above). It is a brand new 18th century opera pasticcio devised and directed by Michael Gow with the late musicologist and Baroque specialist Alan Curtis. His untimely death last year brought composer Calvin Bowman in to complete his work and music director Phoebe Briggs completes the creative team.

Vital – and a traditional element of pasticchio – is the early inclusion in the creative process of the performers. To this end Emma Matthews (soprano), Sally-Anne Russell (mezzo) and Jeremy Kleeman (baritone) have shaped their own characters and the music has been chosen around their particular vocal gifts. The result is a 75-minute melange of mostly lesser known music from very well known composers Handel, Vivaldi, Telemann and Gluck, plus the semi-forgotten Guiseppe Maria Orlandini, Sigismondo Molino, Gian Francesco de Majo and Johann Adolph Hasse.

Opera pasticchio was sneered at by the stuffy, then and now, much as the derided jukebox musical is disparaged. Nevertheless, in the right hands the form – old and modern – can be much more than a mere “cobbling together” of existing songs and music. Think Mamma Mia! and you have the basis for Voyage to the Moon !

As it happens, Michael Gow’s involvement was more than serendipitous as he is not only a playwright and director but also turns out to be a Baroque nut. In his spare time he’d already been mulling over the possibility of doing something with the 16th-century epic poem, Orlando Furioso, by Ludovico Ariosto. And that’s the plot of Voyage to the Moon.

Orlando (Emma Matthews) is seriously distrait after his lover abandons him in favour of an enemy knight. His own mind then abandons him and takes up residence on the Moon in the form of a jar of vapours. This enables Matthews to demonstrate the full range of her vocal possibilities in a virtuosic coloratura portrayal of madness.

Enter Orlando’s cousin and best friend Astolfo (Sally-Anne Russell) whose rich and true mezzo is called upon to give succour and hope to the afflicted and also come up with the plan to go to the Moon and retrieve the missing wits. This requires the intervention of the magician Magus (Jeremy Kleeman). The formal requirements of the Baroque mean a glorious warm baritone is of course the given voice for wisdom, benevolence and problem-solving. 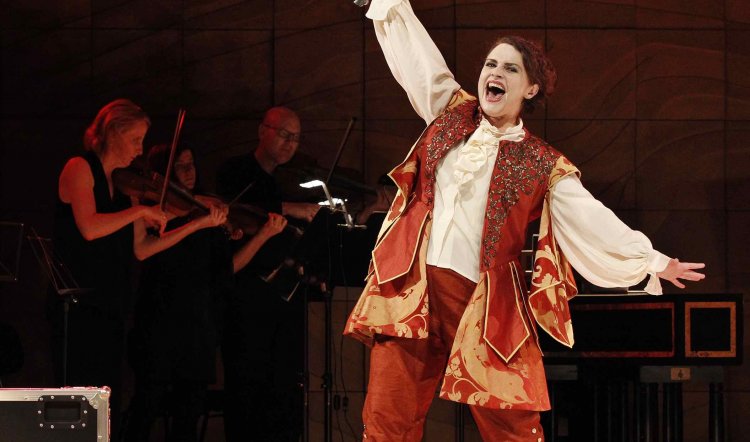 So far so improbable – but that’s hardly the point. Having learned relatively recently that there were continents beyond the horizons of the known world, people were looking for a new final frontier and the Moon was it, which is why so much entertainment of the time centred around going there. In this instance, further obstacles are put in the way of the voyagers when the latterday equivalent of hostile natives is encountered: the Moon’s guardian Selena (Matthews again, swapping swashbuckling swordplay for swishing gown and towering crown).

A musically satisfying opera of just three performers needs some fine back-up and this comes in the form of the on-stage ensemble of Phoebe Briggs leading from the harpsichord, Emma Black (oboe), Rachael Beesley (violin), Zoë Black (violin), Simon Oswell (viola), Molly Kadarauch (cello) and Kirsty McCahon (double bass). Otherwise the staging consists of a higgledy-piggledy stack of travelling cases and a whimsical arrangement of sheet music and stands.

The visually sparse production – enabling easy and economical touring – means the emphasis is on the music and as it’s so beautifully rendered by singers and musicians alike, it bodes well for the broadcast version and, hopefully, a recording.

Meanwhile, Musica Viva and Victorian Opera must be applauded and encouraged for their partnership and innovation.Voyage to the Moon was a fantastic idea and is providing a rare treat for thousands. Let’s hope they get to cooperate on many more and other new ventures.

NB: I was stricken with a bronchial/asthma attack about 20 minutes into the Monday night performance in Sydney. Rather than ruin it for everyone, I left the auditorium. Happily, City Recital Hall pipes the sound throughout and there’s a screen too so I watched and coughed from the foyer. (Staff also brought me water and checked back from time to time to make sure I was okay - thanks very much.)