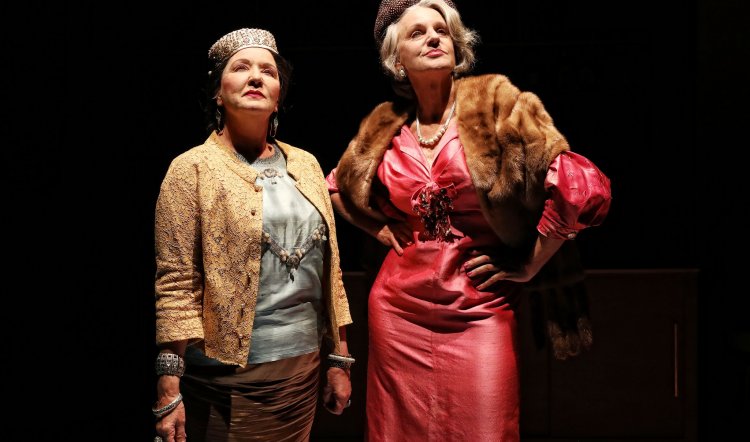 The bio-comedy Lip Service, starring Amanda Muggleton as cosmetics queen Helena Rubinstein and Linden Wilkinson as her life-long rival Elizabeth Arden, has been long anticipated. This not least because John Misto’s play famously had its world premiere season in London last year with Miriam Margolyes and Frances Barber as the lipstick harridans. It was then titled Madame Rubinstein (to avoid mistaken identity with Lip Service, a Brit TV series) and it’s a pity this title wasn't retained as it makes more sense of what we see on the Ensemble stage.

Standing just 4’10” (125 cms) on her Krakow-born feet, Rubinstein became a towering presence in 20th century business and the lives of millions of women. Exiled by her huge and impoverished family to an uncle in Castlemaine, Victoria, the young woman worked her way out of obscurity via a face cream she devised and sold to eager and leather-skinned farmers’ wives. In brief, thanks to an abundance of Australian lanolin and even more chutzpah, Helena invented the cosmetics industry as we know it.

Hot on her heels was a Canadian-born New York beautician. She took the name Elizabeth Arden and a pink and gold colour scheme for her beauty salons and wares to dizzy heights of commercial success. Both women were extraordinary in their achievements and, not really surprising, less successful in their private lives. Rubinstein was notoriously “frugal” in her work environment, rationing electricity use at her New York HQ; keeping snacks as well as jewellery in a wall safe because it was cheaper than a fridge, and so on.

Misto’s play is set in the last decade of Rubinstein’s long life and for theatrical and comedic purposes fictionalises her relationship with Arden – in reality and reliably, the two never met face to face. (Not that this seems to matter for entertainment purposes. A Broadway musical War Paint, which opened in April, also features Helena and Elizabeth up close and antagonistic in the form of Patti Lupone and Christine Ebersole!)

The non-singing pairing here in Sydney of Amanda Muggleton and Linden Wilkinson is effective. Muggleton assumes a mittel-European accent that’s as thick and creamy as one of Helena’s fabled unguents, but she rarely slips into caricature despite the many scripted temptations. It means that by the time the – real – tragedy of her life is visited, there is empathy in the audience already there and her chronic inability to express or receive love is touching. 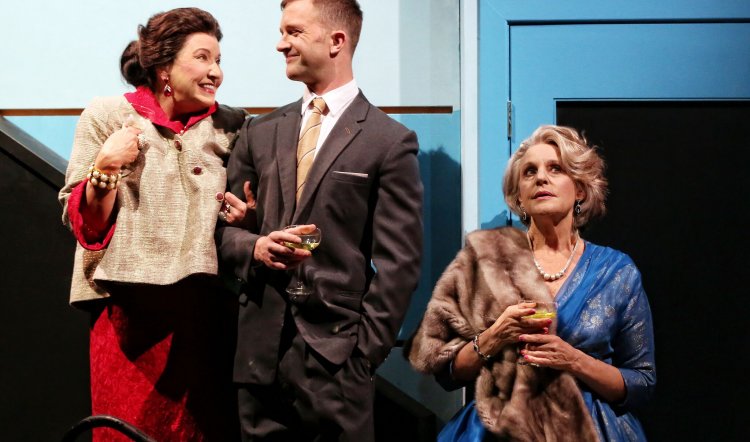 After a long hiatus (a PhD and other activities have distracted), it’s terrific to see Linden Wilkinson back on a stage. She has less air time and opportunity to establish her role as the woman born Florence Nightingale Graham in small town Ontario, but does so nevertheless, bringing a credibly spiky, acidic quality to the mix.

A third element in the play and in the Great Cosmetics Wars of the 20th century, as presented by Misto, is Revlon and its boss, Charles Revson. In the play he is Helena’s unseen nemesis – his office window across the street from where each could and did spy on the other. Spying and bugging feature prominently in relations between the tycoons and Helena’s quaint grip on English means at least a couple of cute “bugger” jokes.

Speaking of which – and there are a number of low-grade poofter jokes in the play – the actual third character in Lip Service is Helena’s real-life long-suffering Irish personal assistant and public toilet-frequenter, Patrick O’Higgins. Played with charm and conviction by Tim Draxl, “Irish”, as Helena called him, provides a foil and alternate focal point for both women and, finally, moments of poignancy.

The play is a major hurdle – actually a series of hurdles – for the actors, however. For a start, although the Ensemble website says “Approx. 2hrs (including interval)” it’s much longer and feels even longer. The first half, in particular, could do with a good edit of its longueurs and interminable procession of bitchy one-liners. Yes, they’re mostly funny, and on opening night there was initially much guffawing, but many of the witticisms had no purpose in advancing the action and therefore stopped it dead, despite director Nicole Buffoni’s best efforts.

Also providing another hurdle to smooth running is the play’s style of frequent short, choppy scenes necessitating clumsy scene changes. A projected sign in the blackouts tells us where we’re going next, while the elegant but not quite right set (Anna Gardiner; lighting: Christopher Page) is re-calibrated, often with little effect – an aeroplane, for instance, that distracts because it’s just...not. The costumes, however, are another matter: varied, period and excellent. 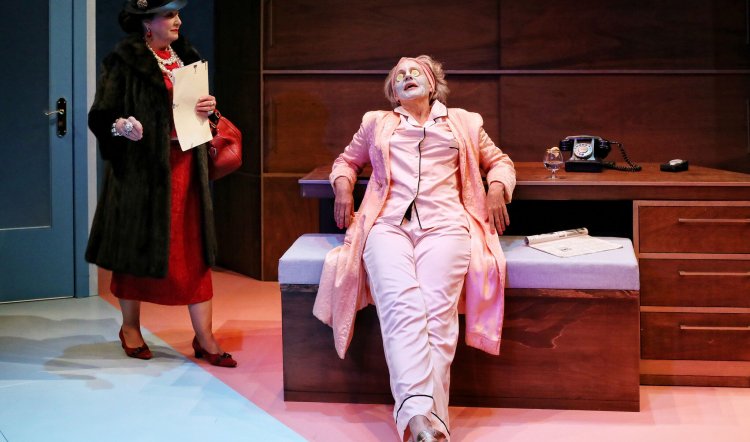 It’s also disingenuous to announce on the website that the play sold out in London (ergo, dear subscribers, smash hit play) when the truth is, it sold out prior to opening on the strength of the name Miriam Margolyes. Post-opening the reception, for the olay, was middling to tepid. And that’s a shame because all four women here – Rubinstein, Muggleton, Arden and Wilkinson – deserve so much better. Although there's something to be said for a conflict carried out with (waterproof) mascara wands at twenty paces.

More than that, however, at a point in our history, and globally, when racism, homophobia, anti-Semitism and other horrors are being encouraged on so many levels, it’s downright offensive to set out to achieve laughs through end-of-the-pier gay, Jewish, fat and female stereotypes. There is so much brilliant material available and untouched in the true stories to make sumptuous drama and comedy.

It’s also somewhat offensive that the images of the two women are virtually reversed in the play: Helena was not a chicken leg-gnawing vulgarian and mean Jew, but a considerable philanthropist and art lover. Not only was her portrait painted by Graeme Sutherland (something she finds weird and awful in the play) but also by such notables as William Dobell, Marie Laurencin, Picasso, Raul Dufy, Roberto Montenegro, Sarah Lipska and photographed by Helpmann nominee Cecil Beaton. She was a patron of the arts and design; her collections were considerable. Elisabeth Arden, on the other hand, was not quite the cultured pearl portrayed in Lip Service: she owned and bred race horses. All in all there are plenty of easy laughs and these actors are more than capable of the fine comedic performances – but it’s a pity the humour is so often so cheap and the story so reductive.

That Lip Service remains watchable is mainly down to Amanda Muggleton. She manages to retain humanity and an intelligent take on the character of Rubinstein (who could so easily be merely a wise-cracking gargoyle in lesser hands). In the second half, which quite frankly, is where the play really resides, she finds the pathos and vulnerability beneath the carapace of the narcissistic autocrat and it’s genuinely moving and illuminating. What could have been suddenly becomes obvious – and that’s even sadder. Nevertheless, Muggleton, Wilkinson and Draxl are a tremendous trio and make the most of their every moment.