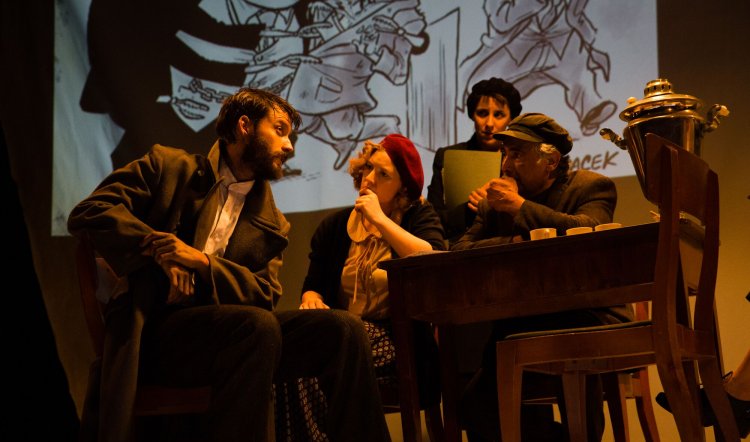 NO END OF BLAME

Art and its power to disrupt is one idea on which this major play by Howard Barker is based. The other is the relationship between truth and fiction and how effective the fictitious telling of truths can be. And after almost four decades, No End Of Blame is still an incendiary work with heart, brains and soul. No wonder it has been revived so often since its first production in London in 1981.

Sport for Jove’s artistic director Damien Ryan is in his element with the multi-character, Brechtian style of the play. His confidence and intelligence are luminous in throwing light and reason on its somber depths and sprawling story arc. It opens in WW1 with two young Hungarian soldiers, Grigor Gabor (Sam O’Sullivan) and Bela Veracek (Akos Armont).

The men are best friends, aspiring artists and up to their necks in the filth, death and horror of the battlefield. Also present is a terrified peasant woman (Amy Usherwood) who, after seeing only male bodies for so long, Grigor is desperate to draw and Bela is desperate to rape.

The playwright turns the tables on this latter, classic act of war by having the men apprehended by a Russian patrol and because Bela is naked, the assumption is they are homosexual and therefore must be shot. Plus ça change? And so it goes, through their survival of the war, to art school in Budapest, Bela’s frustration with classical training and passion for paper and ink and political cartoon: “I hate oils, studios, manipulating colours inches thick. Give me ink, which dries quick, speaks quick...hurts.”

With art student girlfriend Ilona (Lizzie Schebesta) in tow, Bela persuades Grigor to leave for Moscow, where he says, everything is happening and they can be free. He reckons without Stalin, though, and jubilation is short-lived. The between-wars history of Europe flashes by as vividly as the cartoons being drawn on the vast, ragged sheet of white paper which forms the back wall of the set. It is all there in the powerful, wry, tragic and funny drawings of the supreme Cathy Wilcox and the Canberra Times’s David Pope; and artist Nicholas Harding’s charcoal sketches. 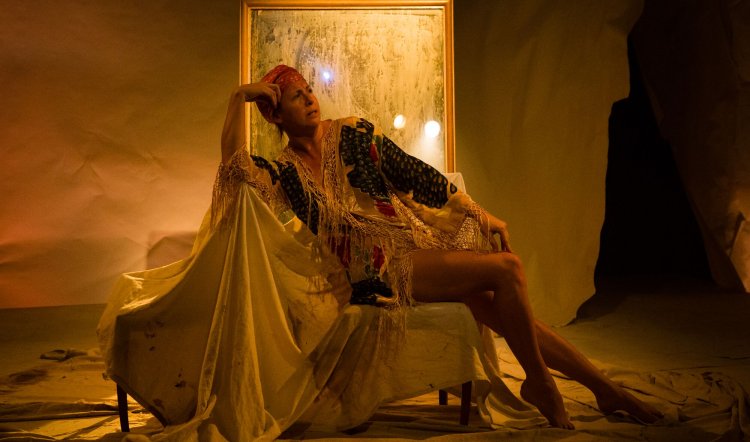 Oppression, suppression, political reversals, the collapse of ideals and the rise of Hitler into WW2 are also portrayed by an agile and talented company in multiple roles. (Schebesta, Bryce Youngman, Angela Bauer, Danielle King and Monroe Reimers.) Underlying the lightly sketched human dramas are the questions to which Barker constantly returns as he rails against the insidious politics that from left or right, leads to censorship and the smothering of human rights, freedom of expression and freedom of speech. (Sounding familiar?)

By the end of a kaleidoscopic, freewheeling Act 1 (an hour and 20 minutes), the audience has probably laughed a lot and also been appalled at the unromantic portrait of war and revolution. And, through the competing aspirations of Bela and Grigor, we are reminded of the power of the simple pencil. For Grigor it is about the purity and truth of the line, for Bela it’s about the power of the idea behind the line.

That power is illusory, of course, and Bela flees to Britain and avoids the gulags. He lands a job on the Daily Mirror, the Labour-leaning tabloid favourite of the working class, cartooning for victory as “Vera”. Clear echoes of real life abound as Bela is a loosely-laced amalgam of two famous cartoonists of the time. The Hungarian-born Victor “Vicky" Weisz and Philip “Zec”, British-born son of Russian-Jewish refugee Simon Zecanovskya followed one another at the Daily Mirror and their lives are cherry-picked to depict Bela’s rise – and ultimate fall.

Having first offended the Hungarian authorities as an art student, Bela not only falls foul of Stalin, but finally incurs the wrath of Lord Beaverbrook and Winston Churchill (as Zec actually did!). Such is the lot of the career iconoclast. The irony is that we see how, just as the great political cartoonists take no sides, when it comes to the crunch, often no one takes theirs. Yet while once a cartoonist was simply fired for offending the thin-skinned mighty, it’s impossible not to think of Charlie Hebdo and how extremes of ignorance and hubris have redrawn the political landscape.

While the continuing relevance of Barker’s 1981 play is apparent in so many ways, the representation of the female characters is an exception. It’s perhaps made more obvious at the moment because of the recent powerful intervention in Sydney of WITS (Women In Theatre and Screen) which is causing an ongoing, positive ruction in the male-dominated fabric of theatre; and also because of the revelations from Hollywood of Harvey Weinstein’s classically unsurprising behaviour towards young women. 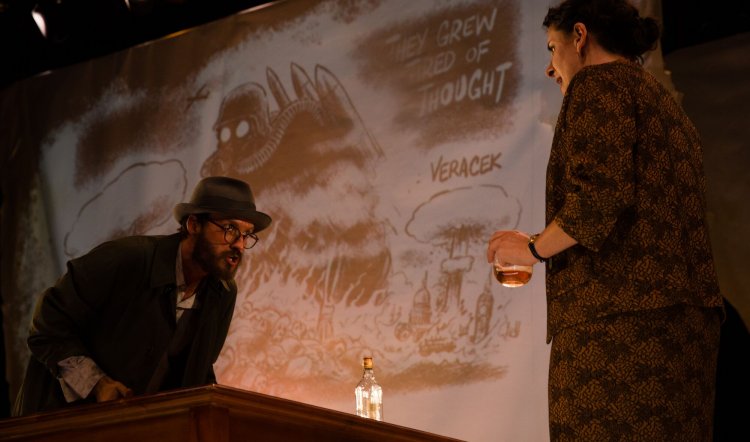 Not that Barker is intentionally offensive in his portrayal of women, but the fact is, he is an old Leftie of his times and females are present as muses, breasts, beautiful backs, tea ladies and kindly nurses. The exception is Bobby (Danielle King) the gruff, increasingly alcoholic editor of the Daily Mirror who hires and finally fires Bela. She is a Nancy Spain look-alike and the most three-dimensional woman present – and also fictitious!

You can see there is much to savour, think about and simply enjoy in this splendid production. The drawing paper backdrop is fronted by a rough, raked stage surrounded by the nondescript detritus of inter-war European life as well as more surreal elements and interspersing silhouetted vignettes (set designer Melanie Liertz, lighting Fausto Brusamolino). Sound designer Alistair Wallace mixes various FX and musical elements – gypsy, folk tunes, Bartok and Paganini – in a vividly filmic soundscape and all these elements combine with the eight actors into a sumptuous visual and aural experience.

“They grew tired of thought,” is the line attached to a “Bela” cartoon and it’s possibly the most frightening idea to be left with at the end of the night. Suddenly it makes sense of what is happening in the US and other parts of the world where “terrorism” – religious and variously coloured – is the end result of no longer wanting to be made to think. Going against that tide, however, No End of Blame is a great night out for anyone who wants to think as well as laugh out loud and gasp in horror. Recommended.