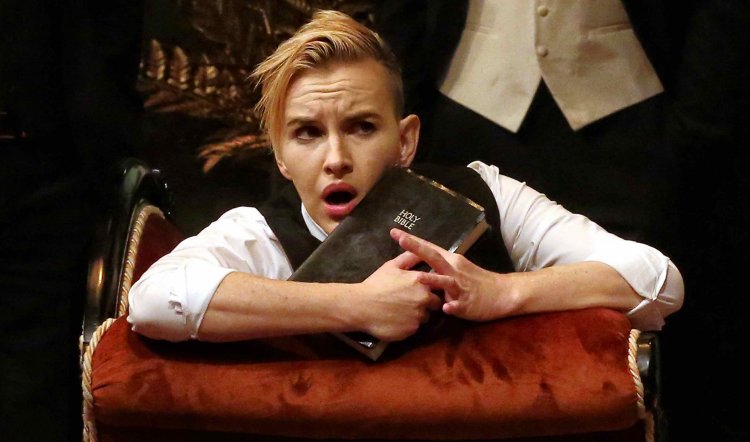 In the program for this, Bell Shakespeare’s first production of 2017, its director Peter Evans says in an “In conversation” interview: “One of Richard’s fascinating traits, and part of what makes him so successful, is that he’s unlikely. You can’t imagine him as ruler so you are unbalanced throughout his performance. People and scenes are often off-centre because they can’t believe what just happened, or anticipate what might come. There is a sense that reality has been shifted and Richard’s road to power is incredibly unlikely, with too many steps to get himself to the throne.”

Evans also says this setting and playing of Richard 3 is neither especially contemporary, nor anywhere in particular but that, en passant, at this juncture it’s impossible to read the above without thinking there are currently tens of thousands of bewildered people in the USA (and around the world) who might gain some comfort or understanding from this production: never has this dreadful monarch or that improbable president been so predictable – if our eyes had been open.

In this context it should be noted that Evans and his Richard, the wondrous Kate Mulvany, first talked about casting her in the role some two years ago – when the idea of such an unlikely and grotesque leader rising from the swamp of Shakespearean England or Washington DC was an idea then beyond improbable.

Also within these past two years, of course, the skeleton of the real Richard was discovered when a carpark in Leicester was dug up. No more can the play’s acidic description of him be applied that he was a “poisonous bunch-backed toad,” nor the character’s own observation of himself that he was, “so lamely and unfashionable that dogs bark at me as I halt by...” 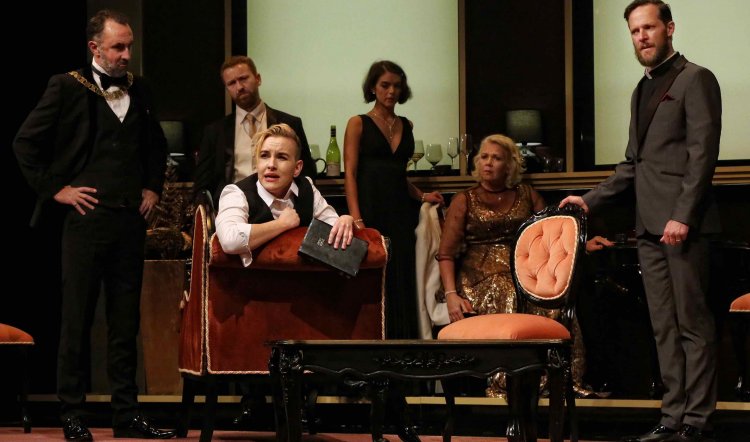 We now know from those royal bones that, like Mulvany herself, Richard actually had scoliosis and was fair-haired and blue-eyed – not the obviously misshapen hunchbacked, saturnine miscreant of Shakespeare’s fiction. With these images in mind Mulvany’s portrayal takes on a more than usual human aspect. It’s wildly at odds with the portrayals favoured by most actors in living/screen memory – notably Anthony Sher’s crutches-enhanced black spider and Kevin Spacey’s ridiculously melodramatic “my kingdom for a decent toupee”.

Kate Mulvany’s Richard is a preternatural combination of the masculinity of Katherine Hepburn in The Lion in Winter and the femininity of Ian Richardson in House of Cards: neither male nor drag king, nor middlesex, but a wretched sad prince of his upbringing’s making. It’s a malignantly exquisite and charming characterisation. When Richard turns to the audience, the complicity and sympathy he generates in the auditorium is palpable and unnerving.

This Richard 3 is set in what might be a drawing room aboard a cruise ship or in a casino: it’s faux elegant, a bogan’s idea of sumptuous luxury and a target it misses by a mile (design: Anna Cordingley, lighting: Benjamin Cisterne). The company is in this room throughout and in artfully arranged tableaux when not “on stage”. It reinforces that although Richard is always surrounded by courtiers, family and other hangers-on, he is alone and lonely. It’s made starkly clear in the opening moments when the company engages in a series of febrile, twitchy dance moves while Richard is – typically – still and disengaged.

As Richard sets out on his murderous journey to the throne, those around him take their turns in the spotlight to seize his (and our) attention. Sandy Gore is a serene, velvety Queen Margaret, silent and watchful until she utters the mother’s curse that no son would ever want to hear, cordially describing him as “bloody, sly, subtle and dreadful”. It’s an awful moment and suddenly the salacious fellow – who’s been guilefully wooing the widow of a man he’s just murdered – looks unutterably forlorn. 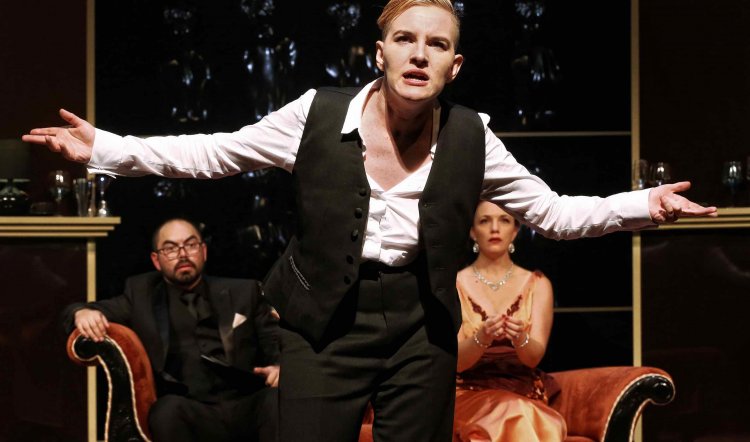 As that widow Elizabeth, Meredith Penman makes the virtually impossible transition – from howling grief to reluctant interest and (relatively) willing queen to Richard – seem almost logical. Rose Riley, too, is a blithely convincing Lady Anne and also a coltish Prince, both unknowingly adrift in the shark-infested waters of the court: too sad. Sarah Woods’ Duchess of York is just the opposite: knowing too much and thus fearing the worst. All the women are tremendous and tragic, struggling like so many butterflies pinned in place and waiting to die.

The men are equally strong in their doubled/trebled roles: Ivan Donato (Hastings and Tyrrel) and James Lugton (Rivers, Mayor and Ratcliffe) are deceptive, urbane, conniving and disdainful by turns. Gareth Reeves’ Clarence, Catesby and Bishop of Ely are varying shades of weakness made fatally muscular by unlikely ambition; while trusting James Evans’s smooth Buckingham is possibly the last thing you’d ever do and remain alive.

On opening night Kevin MacIsaac was suffering from severe laryngitis but heroically soldiered on as (quickly dead) King Edward, and a potent Brakenbury and Richmond. As a natural Ranga, MacIsaac also adds an appealing note to the production’s costume and soft furnishings palette with its tones of peach, caramel, brandy and salmon pink all brightening the overarching gloom. That gloom is further served in echoing, creepy fashion by composer Steve Toulmin and sound designer Michael Toisouta.

Nevertheless, this Richard 3 is Kate Mulvany’s triumph and not to be missed. Her courage, skill, heart and intelligence are given free rein, yet she’s as disciplined and thoughtful as we’ve come to expect of one of our finest theatre practitioners (she’s also the production’s dramaturg) and she’s brilliant. Recommended.