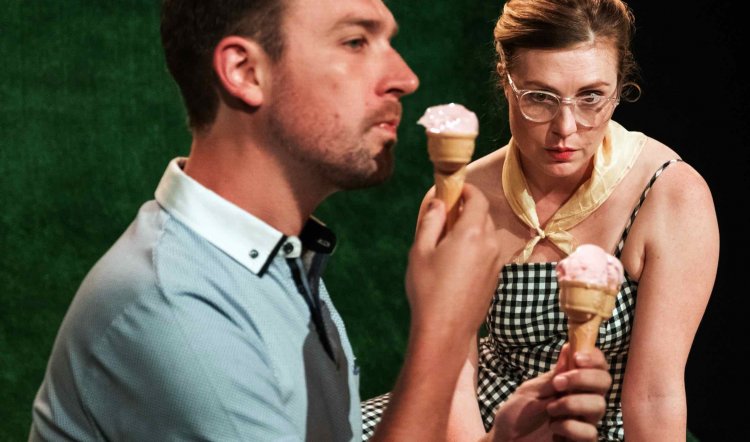 For 80-90 minutes (depending how much you laugh and interrupt) this sharp and engrossing play delivers comedy with a twist of satirical acid. Written by US-based Australian, Amelia Roper in 2014, it looks back to 2007 and a sunny Sunday when the global financial musical chairs theme stopped.

Actually, it was September 2008 when Lehman Brothers went down, but the effect was the same: a tranche of smart bankers found themselves without a cushion to sit on. And tens of millions of ordinary mortals had the dream of a cushion destroyed forever, but never mind them.

In a green and pleasant park Amy (Matilda Ridgway) and Henry (Tom Anson Mesker) are playing at being a normal New England couple enjoying the weekend. He at least is ordinary enough, he’s a paediatric nurse and he’s also in love with Amy even though she persistently refuses to marry him. While Amy, clad in a chic retro lounging ensemble and ill-concealed exasperation, reads The New York Times, Henry has been to the ice-cream van to bring back a double strawberry cone for her.

The creamy pink globs of ice-cream are temporarily a dripping symbol of all that’s not quite right with Amy and Henry. She doesn’t want the cone and won’t take it, he cajoles and tries to press it on her even as he licks and chomps on his own. The ice cream’s eventual fate is not as represented in the production’s eye-catching poster image, but is pretty drastic nevertheless.

Amy and Henry have just bought a substantial house nearby – actually Amy has – and they’ve sold their apartment – Amy has – to facilitate the move. Amy has put the house in Henry’s name, and that demonstrates how much she loves and trusts him, she intimates, so why should they get married?

One answer to this question happens by when Sara (Nikki Britton) and Max (Dorje Swallow) arrive in the park. They are even more out of place on the grassy slopes and not just because they’re dressed for a formal occasion, yet they appear to have been shopping. They’re laden with name carrier bags, but Max is also carrying a rather elegant floor lamp. It stands bizarre sentinel over the gathering when they are invited to share Amy and Henry’s large plaid picnic rug. 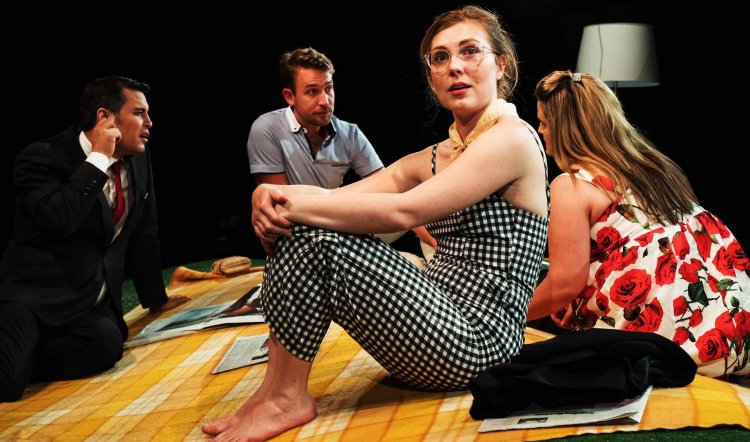 Amy and Max have worked together at one time, something she bitterly relates in revealing that she was the one who did all the deals and had the great ideas and he was the one who’d been promoted and headhunted. But now the tide has turned, Max and Nikki haven’t been shopping: they’re actually carrying all that remains of their previous life. They’ve lost their house and he’s lost a bank and Nikki has barely had time to be nostalgic for her old money upbringing and the estate and horses that went with it.

Under Nell Ranney’s carefully nuanced, physically aware and confident direction, the quartet make much of Roper’s droll script. The setting, by Isabel Hudson, with lighting by Christopher Page, is a vividly green and sunlit Astroturf waveform. It overcomes the constraints of the traverse theatre as the actors are subtly choreographed around the picnic blanket and the world collapses just offstage.

She Rode Horses Like The Stock Exchange is a play about everything and nothing, as the best plays often are. The nothings are more important than the everythings – much as they are in real life – and the more we learn, the less we know. Plus ça change. Matilda Ridgway is a perfectly-judged spiky confection as the finance whiz who’s riding the tsunami of economic disaster with her secrets and portfolio intact. Her balancing act is beautifully judged between bitch and babe, it’s no wonder Henry is in her thrall.

As Henry, Tom Anson Mesker is a delightful foil of gentle, somewhat dorky masculinity in his thrift shop duds and ease with himself. It’s a characterisation at the opposite end of the spectrum from the stitched up Max. As Dorje Swallow struggles with his doomed reality his suit and tie seem to be strangling him. He diminishes even as his wife reveals herself as much more than the Stepford Wife he thought he married. Nikki Britton’s bewildered Sara gains humanity as the dreadful afternoon staggers on.

She Rode Horses Like The Stock Exchange is ostensibly about what happened a decade ago but it would be a mistake to view it as merely historical and merely a comedy. It’s damned clever, funny, poignant and it’s recommended.