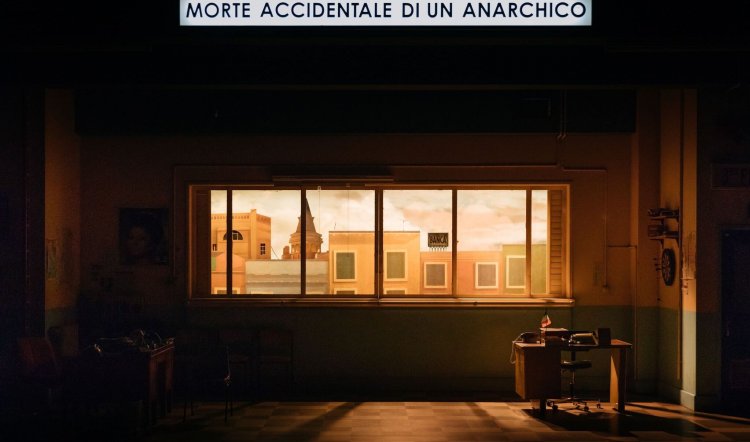 ACCIDENTAL DEATH OF AN ANARCHIST

ACCIDENTAL DEATH OF AN ANARCHIST, Sydney Theatre Company at the Drama Theatre, Sydney Opera House, 10 September-27 October 2018. Photography by Daniel Boud: above - the scene of the “accident”; below - Julie Forsyth; below again - Susie Youssef, Caroline Brazier and Amber McMahon

Dario Fo and Franca Rame have no equivalent today: husband and wife theatre-makers, unbending political activists and relentless agitators in their pursuit of corrupt governments and bureaucracies, who also created box office hits. In 1969, inspired by the “accidental” death of Pino Pinelli, a railway worker and anarchist who “fell” from the fourth floor window of a Milan police station, Fo wrote the two-act farce that made his name internationally.

Accidental Death of An Anarchist toured successfully throughout Italy then, in 1980, an English translation by Suzanne Cowan was staged at Wyndham’s Theatre in London’s West End. It was a popular, critical and political success, and turned Fo and Rame into heroes of the Left and for feminists in Britain and across politically-fomenting Europe.

They were turbulent times, with the Italian Red Brigades, the Baader-Meinhof Group in Germany and the (more polite) Angry Brigade in Britain causing death, fear and mayhem among the ruling classes. At the same time various Irish groups and ETA in Spain were waging an anti-colonial war. And all had the full force of their respective establishments brought down upon them, with mixed results.

Fo’s response to the murder of an innocent man by the Milan police was an outrageously absurdist political farce. And in this intelligent new adaptation by Francis Greenslade and Sarah Giles for STC, it’s easy to see why it’s as effective today as it was 40-odd years ago.

We also live in turbulent times. Violence is commonplace, corruption is a given, cruelty is everywhere and, as Sarah Giles writes in her program notes (she also directs) “... given everything that is happening politically around the world, it's funny to think that Italy in 1969 was ahead of its time with its incredible corruption!”

Giles has a wicked sense of humour and it’s evident in this production. For a start, she’s cast all the male roles with women – in drag. The piquant effect is to make a bunch of essentially silly men even sillier because the actors play them with proper seriousness. 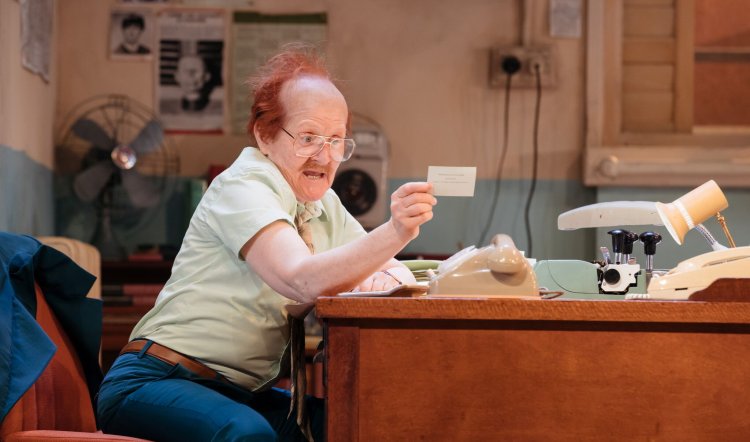 Consequently, although hers is a supporting role, Julie Forsyth is unforgettably hilarious as the ill-starred Inspector Bertozzo. He is an unctuous apparatchik whose balding head is not enhanced by a fairy floss of ginger hair and an attitude at once mild and malevolent. Marvellous.

Bertozzo’s polar opposite in appearance and self regard is his boss, the Superintendent. Caroline Brazier is a comic genius at the best of times, but when sporting a suave suit, urbane moustache and a shock of silver fox hair, she seems to uncannily channel Geoff Morrell in his ABC TV Grass Roots role of Col Dunkley, debonair sleaze of Arcadia Council. Also marvellous.

The signors are up to their eyeballs in malfeasance and the accidental death is but the latest inconvenience. That their world begins to totter is just serendipity – for the audience. Bertozzo, with the assistance of his Constable (Susie Youssef, giving a performance of slyly charming dopiness reminiscent of Blinky Bill) has arrested a young man whose very appearance and demeanour are arresting.

Known only as The Maniac, Amber McMahon is a mane of Fabio-style black hair, pencil moustache and goatee, flashing blue eyes and a roguish way with the audience. He’s made undetected crime into an extreme sport and has lost count of the number of impersonations for which he has been apprehended but never convicted. When he learns a judge is on his way from Rome to investigate the “accident” The Maniac knows all his Natales have come at once.

In Bertozzo’s absence and in the presence of the Constable, the Superintendent and his other sidekick, Inspector Pisani (Bessie Holland in mutton chop whiskers and bad attitude straight out of a 70s cop show), The Maniac takes on the role of the judge. This worthy is expected to paper over the cracks and declare “business as usual”, but obviously it is not to be. And when a notoriously tough journalist arrives in the person of Maria Feletti (Annie Maynard in the gimlet-eyed, sophisticated style of Ellen Fanning) the gatto is instantly amongst the piccioni.

What happens next and next again is a kaleidoscopic whirl of plot and counter-plot, nonsense, sparkling word-play, sight gags and pretty much everything needed to keep the riveted attention of all. On our (catch-up) Friday night performance a packed house laughed sparingly but was clearly transfixed and deeply engaged. 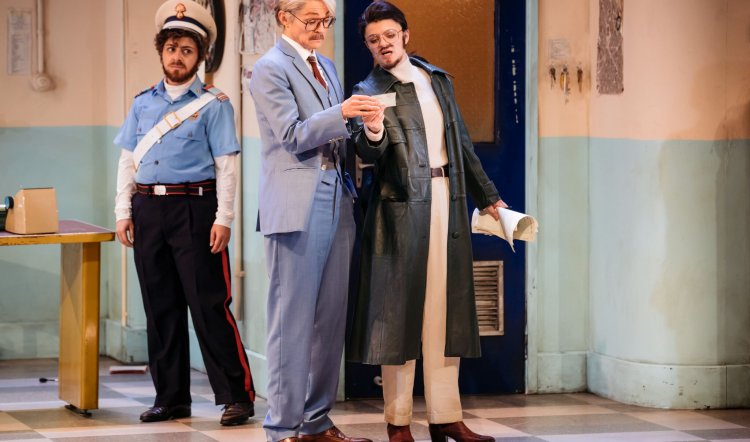 The Drama Theatre stage is used to its full width in Jonathan Oxlade’s semi-realistic and witty third and fourth floor offices of the police station. A window dominates the back of the stage, at which much is made of how one might fall from it or be pushed. Beyond it is a drab city skyline and sky. The furnishings are government issue drab, except for the full colour poster of Sophia Loren in her heyday.

Jonathon Oxlade has devised a setting that enhances and never hinders the often frantic action; Trent Suidgeest’s lighting does the same and Stefan Gregory’s score and sound is tongue-in-cheek jolly Italian when not providing timely sound effects.

The idea of subverting the machine is an appealing one and it’s what Fo achieved with Accidental Death. The enduring fury of Italy’s various regimes was evidence of that. As Australia has now had almost as many recent governments as made Italy the butt of jokes and popular despair means the play has resonance here, now. That it encourages us to laugh at the entitled is a ciliegia on the torta and to be savoured.

There isn’t a weak link in a production whose two hours plus intervallo fly by. Amber McMahon is astonishing, the rest of the company is superb in support. It seemed as fresh and on point in 2018 as it did in 1980. Oh dear. Recommended without reservation.