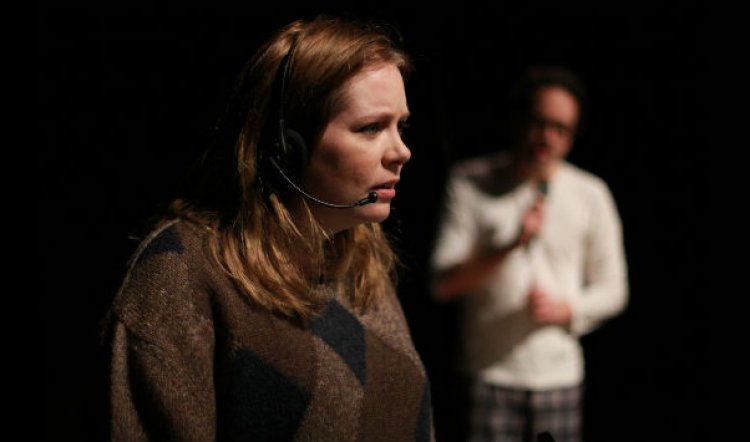 Alison Jones (Eloise Snape) is a lonely, withdrawn young woman whose job doesn’t help her state of mind. As part of community radio station 2RIP’s service for the print-handicapped, she reads the death notices from the newspapers. These print-challenged listeners must also be insomniacs as her program (“it’s not a show”) is very late at night.

One night, however, her nocturnal solitude is interrupted by a caller (“this isn’t talk-back”) whose persistence is equal to his loneliness. John Dean (Tel Benjamin) would be creepy if it weren’t for his obvious grief at the death of his father. Against her better judgement, Alison allows herself to be drawn in to something approaching conversations with the caller.

Some nights later, another caller jolts Alison – and the audience – out of late night reverie. It’s her sister Susan (Suzanne Pereira) and suddenly, Alison is revealed as Annabel and another life beyond the microphone begins to become apparent. Alison/Annabel is angry and resentful beneath her mellifluous reading voice. 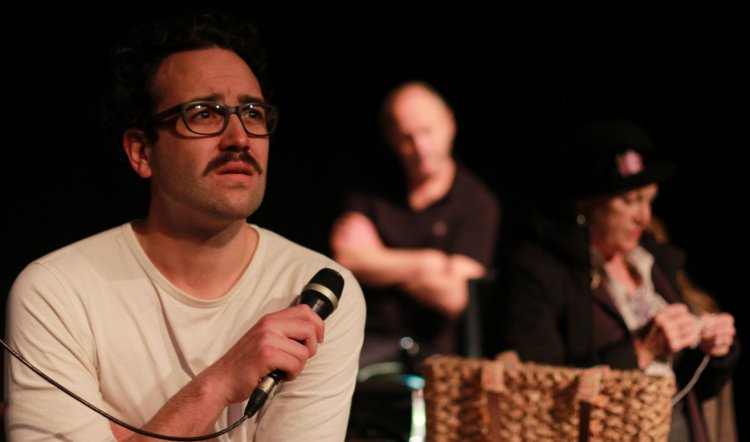 Another layer is added when Annabel’s dead dad Kevin (David Lynch) turns up in the studio. The groundwork for the plausibility of this visit has been neatly laid in the layout (set designer Kelsey Lee) and lighting (Sophie Pekbilimli) of the radio studio. A long, narrow desk and an office chair, both on wheels, occupy an otherwise empty space. On the back wall is the On Air sign. On the desk: a screen, a microphone and Alison’s clutter of newspapers and snacks. It’s comfortably dark, rather than spooky, and the warm illumination of her workspace is also reassuring: The Shining isn’t going to happen here and so, dead dad Kevin is a believable and consoling presence.

Alison’s next caller and then studio visitor is something else entirely. Mabel (Diana McLean) is an old lady whose hubby of many years has gone on and all she has left are his beloved heirloom tomatoes. Mabel is a voluble and shrewd old duck and she will neither shut up nor go away. Pretty much the same can be said for Kevin.

When Alison reads out a death notice for a man who is very much alive – and then finds he’s actually died since she announced his demise – her solitary existence begins to unravel as she is forced to reconnect with the living (and dead). The combination of kindly Kevin, who can’t be seen or heard by the living Mabel, and John Dean’s persistent “date” calls and Susan’s guilt-inducing messages about their mother begins to make Alison’s quiet little job into the show she insists it is not. 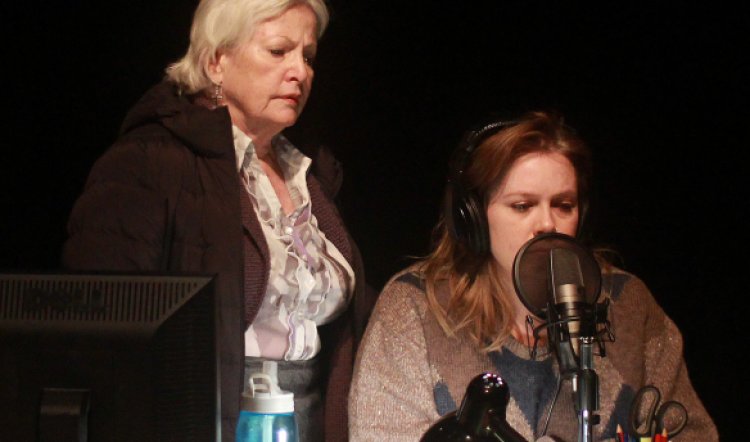 Directed by Anthony Skuse with his customary deft and dexterous hand, Joanna Erskine’s play on love and death and the whole damn thing is part-comedy, part-drama and mostly human; it could do with a bit more trimming and tidying but is very effective nevertheless. Eloise Snape’s strong, central performance keeps the occasionally meandering narrative on track; her progression from frozen angry sadness to a return to life is well judged. She is ably supported by Tel Benjamin’s pathetic-charming John Dean (and other voices), while David Lynch and Suzanne Pereira are equally three-dimensional as dad and big sister.

As wicked old buzzard Mabel, Diana McLean delivers the shock of the evening when she shares her big secret on air. So much so, the full house, Saturday night audience gasped, then got the giggles as she delivered her reveal; McLean is a magnetic and comical presence whenever on stage. (Disclosure: she is a dear friend, but she’s also very, very good.)

Sound designer Ben Freeman has devised a witty, apt aural script for the show about a radio show and stage manager Steph Kelly deserves mention for handling the complex interactions between sound and actors. Kermit the Frog makes a heart-wrenching vocal contribution and there are other moments of profound reflection and compassion. Recommended.