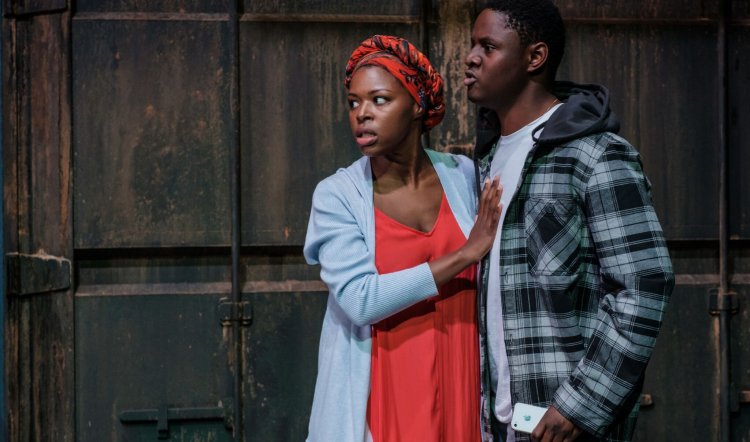 Maggie Stone (Eliza Logan) is a bank loans officer whose selection criteria are dodgy at best and plain racist at worst. A black man, Benedict Deng (Thuso Lekwape) arrives at her desk looking to borrow and is at first mistaken for a cleaner; yet when revealed as a potential customer he is given equally short shrift.

Down the track Deng’s wife Amath (Branden Christine) also fronts Maggie’s desk. She is accompanied by strenuously earnest do-gooder Georgina (Anna Lee) and the clash of class and attitude is snidely fiery between her and Maggie.

Further on in time again, Amath’s angry son Benny (Lekwape again) is on the verge of trouble with the law even as loan shark Leo (Alan Dukes) lurks. Local Muslim shopkeeper (Kate Bookallil) adds to the poisonous mix of racial and social prejudice. 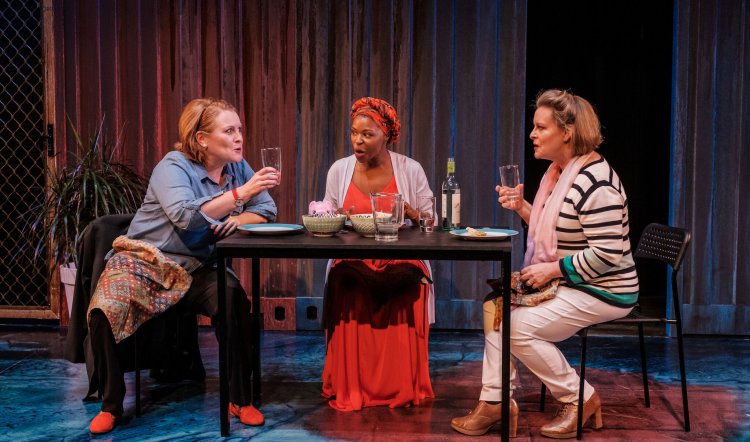 Written eight years ago, Caleb Lewis’s one-act, 80-minute Maggie Stone is initially composed of movie-style fragmented scenes. Where we are is signalled from a sign above the stage – “The Deng Home” and so on – which is as well as it would otherwise be bewildering.

As the interplay between white and black, older and younger, mother and son, friend and foe, middle class and working class goes on the cliches come thick and fast. Virtually every possible dramatic permutation gets a go but is given little time to gel or go anywhere.

Director Sandra Eldridge makes good use of designer Sallyanne Facer’s ingenious setting of a wall of shipping containers in which doors signify different locations. A table and chairs, an office desk and a sofa variously occupy an otherwise empty space and give the actors plenty of room and the audience plenty of scope to imagine. 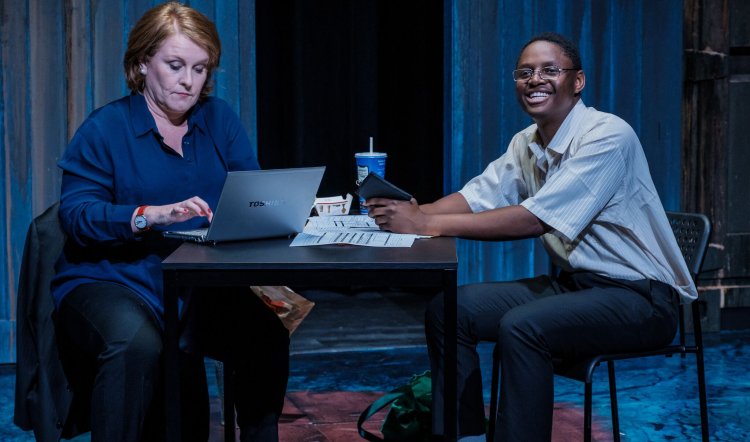 The actors make as much as is probably possible of an uneven and sometimes banal script. Eliza Logan and Branden Christine are strong in the face of storms of platitudes while Anna Lee is funny in her snobbery and exchanges with the other two women. Alan Dukes and Thuso Ekwape are given little to do other than make sleazy (the former) and fulminate (the latter) and they do so effectively.

Although there are gasps from the audience as Maggie takes matter-of-fact pride in her racist attitudes, there is little to be gained either dramatically or politically from the formulaic parade of traits that follows. Interest and electricity pick up considerably after a seemingly endless 30-40 minutes, but by then it’s too little too late.

The narrative focus on Maggie and her awakening to decency is insipid in the face of the possibility of looking at the reality of Australian life for a black refugee family. It’s enticingly hinted at but never explored and these glimpses are a further frustration. A lost opportunity despite the best efforts of cast and director.