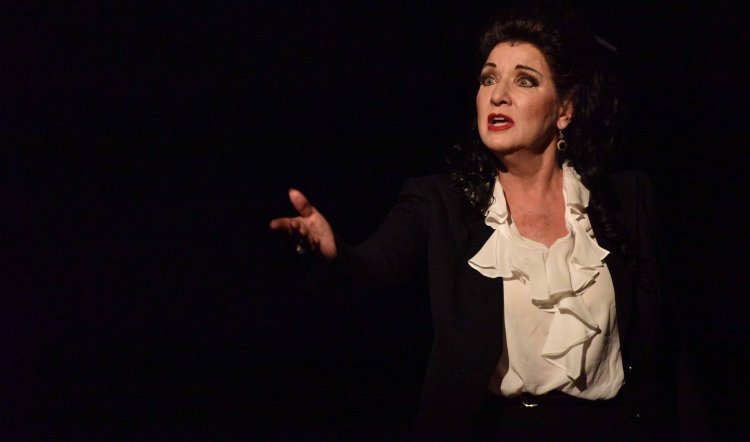 Despite her 2002 turn as Maria Callas being denied to Sydney audiences, Amanda Muggleton still won the Helpmann Award for Best Actress that year. In this, her third tour with Terrence McNally’s Masterclass, it’s quickly obvious why she won: it’s a magnificent performance.

McNally’s 1995 play fictionalises voice masterclasses given by the New York-Greek diva at the Juillard School in the 1970s. On stage is a grand piano and accompanist Manny Weinstock (actually the legendary Dobbs Franks). A small table with music stand and a long-legged bar chair occupy the opposite corner and the auditorium is brightly lit so La Divina can see her student audience.

Not that she wants to: her tempestuous entrance in full length mink and attitude, is accompanied by demands for a cushion, the lights to be lowered and for her questions to be answered promptly and with clear diction.

Muggleton is a mistress of the ad lib and effortless audience engagement. As the ferocious former diva, she stalks the stage tossing advice and wicked barbs over her shoulder. This is not about me, she advises, and there must be no applause. Believe that and risk being skewered by a glare that could penetrate concrete.

When she calls for her first “victim” the term seems appropriate and Kala Gare as soprano Sophie De Palma is a wide-eyed fawn who’s mistakenly wandered into a lion’s den. And just like a wildlife documentary where you know Nature will play it her way and eat the hapless creature, the audience is transfixed in a captivating mix of horrified amusement and just plain horror. (McNally’s script is sharp and funny by turns.)

The interval arrives after Madame decides she’s had enough of torturing Sophie, Manny and us. Disclosure: on opening night I was the recipient of heartwarming advice when the strolling diva stopped at my seat and announced, “I am sure you are lovely, but you don't have a look. You have to have a look!” She's right, sadly, but I was comforted that she also said the person behind me had the same problem. And that was the ever chic Ita Buttrose. 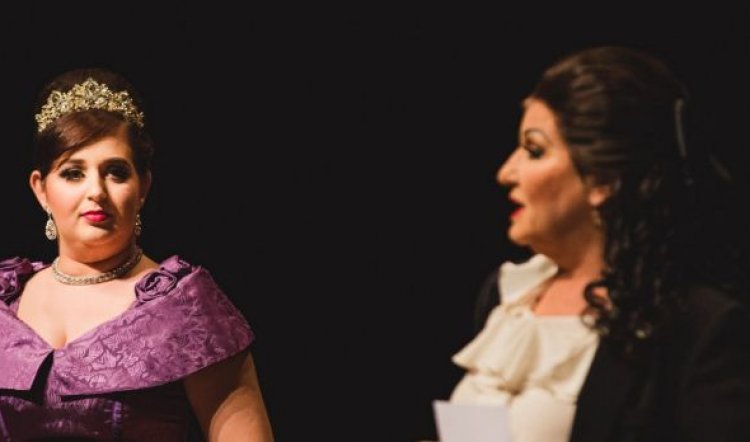 The second sacrifice on the diva’s altar is tenor Antony Candolino (a swashbuckling Tomas Dalton) who makes the mistake of introducing himself as just “Tony”. His self belief is like a balloon and Madame sticks pins in it with enormous relish. Nevertheless, the tough love – or plain old cruelty – being dished out is beautifully tempered by powerful digressions into Callas’s past and genuinely insightful advice on singing and acting.

The thing is, there’s much truth in amongst the caustic quips and outrageous insults delivered during the show. It’s based on Callas’s actual 1971-72 masterclasses and she insists that suffering does not matter; only your art – your work – matters.

And the music underlines these ideas and the heart, passion and pathos central to the Callas magic. The sleepwalking scene from La Sonnambula, for instance, is heart-rending as young Sophie struggles to be allowed to sing a note while her tutor wrestles with brutal memories of her own youth. It’s also poignant, in this era of body-shaming, slut-shaming and the like to hear Callas bitterly reminisce about being called an ugly duckling, sneered at for her weight, her looks, while – from most famous lover billionaire Aristotle Onassis – she was humiliated from one side of the Adriatic to the other.

Callas was no wilting lily, however, and hurled epithets with the best. Most were aimed at other famous singers – not that she considered them rivals, she notes. And even when dripping bile, it’s impossible not to guffaw (quietly, lest she spot you) when she makes compassionate observations such as, “Joan Sutherland [sigh] did her best.”

This new production is directed by London’s new Australian wunderkind Adam Spreadbury-Maher and he does a fine job with both the play and the exuberant Muggleton. She is at her very best here and captures the humanity as well as the humour of the character. In the sequences when a significant aria forms the backdrop to her story, the stage darkens and she stands in a spotlight and tells it and the music with exquisite timing, understanding and intensity. It’s a remarkable performance.

In the second half, La Divina peremptorily demands her last victim front the class. Enter Sharon Graham (a splendid Jessica Boyd) a dangerously confident soprano. When she tells Madame her name is Sharon the diva’s eye-roll is reminiscent of Angela Merkel. It doesn’t help that Sharon is encumbered by a concert frock of hilarious awfulness as well as her decision to sing Lady Macbeth’s “letter” aria. 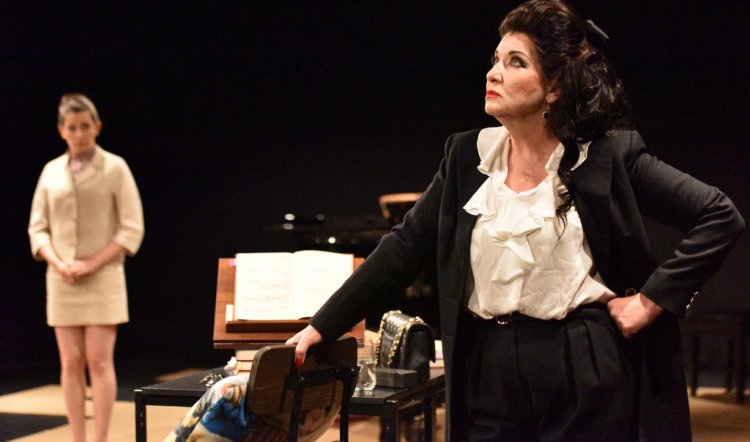 The lesson that then takes place between the two is mesmerising – the Con’s students would do well to get down to The Studio prestissimo – and what is revealed is haunting. Sharon is not only good but also takes Madame’s instructions quickly and easily. Heaven help us, she is praised! But Madame remembers herself and follows it with a deflating scorcher. She has suffered for her art and will ensure these jejune young things pay their dues.

Callas died at just 53 and her Juillard sessions happened in the early 70s when she had been a legend for decades. Masterclass is overlong but consistently funny, when not downright terrifying, and Amanda Muggleton is at the very top of her form. The very 70s outfits (designer Adrienne Chisholm) are a reminder of why Callas felt it necessary to lecture others on their look. More than that, however, the script and the playing of it is perceptive and full of insight.

Anyone who thought Callas was a mere show pony will think again and grow to admire her dedication, rigour and gift and the same could be said of Muggleton. The final scene/encore – when the three “students” finally get to sing – is a delight: rarely has anyone launched from a standing start into Queen of the Night with such conviction and electrifying results as Jessica Boyd.

A musical and dramatic treat with extra savvy on the side. Recommended.

Sexual Misconduct of the Middle Classes