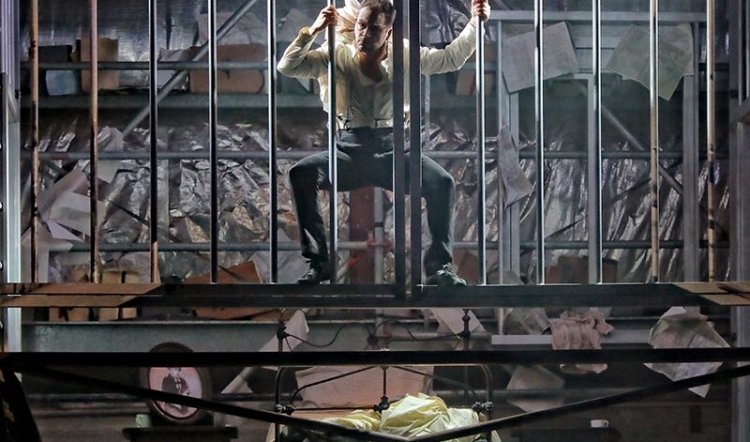 The 1983 Steven Berkoff-Brian Howard version of Metamorphosis is the first of what Opera Australia boss Lyndon Terracini intends to be an annual chamber production in OA’s Scenery Workshop in Surry Hills; with a season at the Malthouse in Melbourne.

It’s a piquant choice to launch the project: Terracini played Gregor Samsa in Victoria State Opera’s premiere production. Now, in the gloomy vastness of the OA workshop – hidden behind the Elizabeth Street HQ – a sizeable stage and raked seating for 330 have been built. That’s fun in itself: to go where the audience never usually goes, and then to see what set designer Mark Thompson and lighting designer John Rayment have dreamed up for it.

The set is a three-level construction of metal scaffolding. Behind it are the untouched walls of the workshop. To either side are translucent drapes on which crawl silhouetted spiders, lots of beetles, possibly cockroaches, all projected and constantly moving. It’s entomophobia au-go-go.

Front and centre, high up, is Gregor’s “bedroom”, cell-like in the geometric skeletal structure. Below are the “rooms” of the family home with a table and chairs, a couch, and a heap of wooden dining chairs cascading to the floor. In either corner at the top of the house sit two figures/lodgers in their own “rooms” who observe and eventually take part.

Franz Kafka’s 1915 novella begins, in one of many translations, with: “One morning, when Gregor Samsa woke from troubled dreams, he found himself transformed into some sort of horrible insect.” As Gregor, Simon Lobelson wakes later than usual having slept through his 4am alarm to just this predicament. Visibly his humanity recedes as his movements become more beetle-like. He puts it down to working too hard as a travelling salesman – to support his family in their too-large house and pay off his lazy father’s debt to the Chief Clerk (Adrian Tamburini). 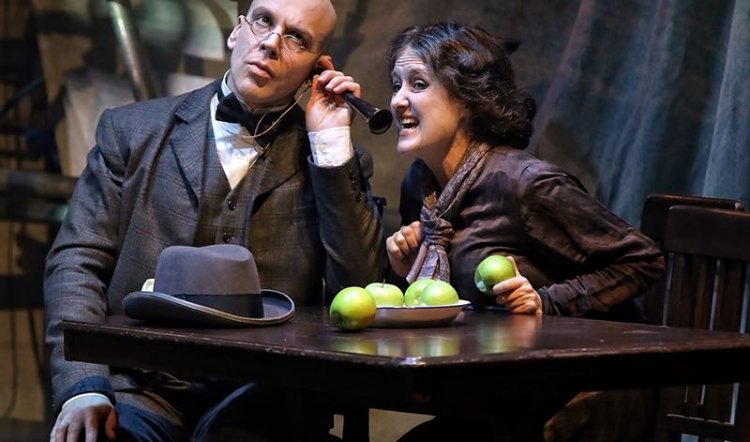 Downstairs, his Father (Christopher Hillier), his ineffectual if devoted Mother (Taryn Fiebig) and sister Greta (Tabatha McFadyen) nervously wonder why their workhorse isn’t off to catch the 5am train. Before long the Chief Clerk is also questioning his faithful employee’s absence and arrives to interrogate the family and Gregor. Meanwhile, Gregor has taken to climbing his bedroom walls, hanging from a chandelier, eating repulsive snacks and not being a travelling fabric salesman.

Director Tama Matheson has fashioned a dramatically clear and compelling drama from this often cruel and confronting work. as the nebulous direction of the narrative fluctuates between untroubled and troubled, tranquil and harried, peaceful and unsettled (as described by Kafka translator Susan Bernofsky).

This visual effect, together with Howard’s score – emanating from an orchestra pit centrally situated on the stage around which the singers manoeuvre – are at once energising and agitating. OA Orchestra soloists under Paul Fitzsimon’s baton include an electric guitar and an array of percussion (set off behind the drapes), and the frenetic, sometimes jarring and disjointed instrumentation and music conjure aural images of alienation, miscommunication and – ultimately – deep sadness.

Simon Lobelson gives a remarkable performance as Gregor: physical and cerebral, outwardly emotional and internally musical. It is impossible not to feel for his predicament even as the tenuous strands of connection with his uncomprehending family flail and injure like snapped hawsers.

It’s also impossible not to feel caught up in the web drawn by Thompson’s scaffolding and the overlaying of Rayment’s sharply drawn strips of light and shade. That combination, together with the blanched colour schemes, pale faces and harsh washes of light strongly suggest the pallid life of people who never see the sun – whose rock of comforting certainty is overturned without warning, leaving them scuttling in every direction. 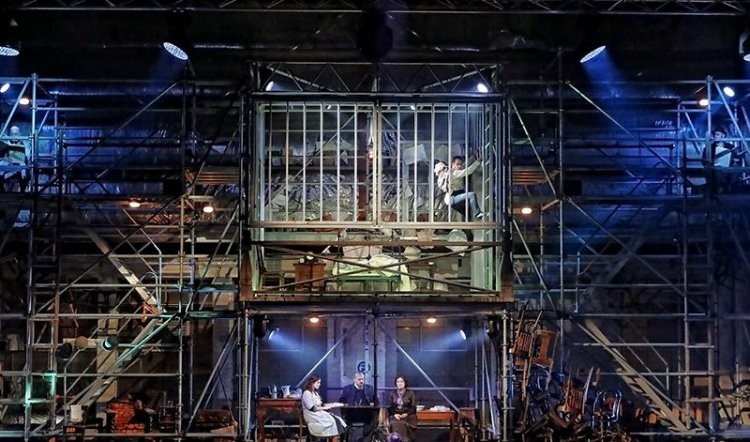 Seeing this ordinary family, in the original context of Europe in 1915, suddenly transformed by fear and material loss to the point of betrayal and murder is a dreadful thing. It makes their actions towards Gregor comprehensible if not forgivable; also recognisable.

As the Mother, Taryn Fiebig is in glorious voice and conveys with painful clarity and a glowing performance the desperate inner turmoil of love and weakness. At the opposite end of the spectrum of acceptability is the Father. He is an entitled man of small talent and much hot air and splendid Christopher Hillier brings him to life with vocal confidence and pouter pigeon certitude.

Adrian Tamburini makes a similar feast of his role as the odious Clerk, while Benjamin Rasheed’s scene as the Lodger is a vignette of contrasting vocal beauty and all too dark human failings. These two are as current and effective as a couple of shiny cockroaches revealed by #MeToo and are central in the strands that link the ideas of a century ago with today.

It was announced on the morning of the first performance that Julie Lea Goodwin would be unable to perform the role of Greta because of a severe throat infection. By chance, talented soprano-lately-turned-director Tabatha McFadyen had been seconded to the show as director’s assistant. So she took on the role in less than 24 hours and performed with astonishing assurance and vocal truth. She continues as Greta for the rest of the short season and is remarkable!

Metamorphosis is not an easy work but it is exciting and hugely rewarding, especially in this spectacularly realised production. OA is on an artistically thrilling winner with the chamber project and it’s to be hoped that adventurous music-theatre and opera lovers will support it. Recommended without reservation.