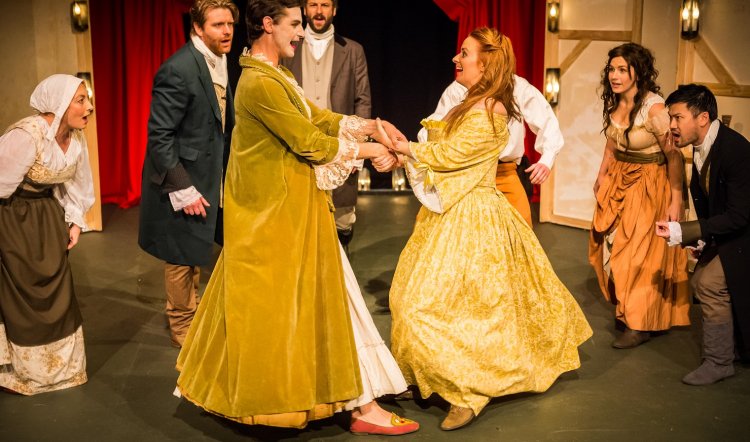 NELL GWYNN, New Theatre, 8 August-8 September 2018. Photography by Chris Lundie: above, members of the company with Steven Ljubovic and Bishanyia Vincent; below, with Lloyd Allison-Young; below again, with Rupert Reid

In her second full-length play – and winner of the 2016 Olivier for Best New Comedy – the UK’s Jessica Swales has applied a 21st century feminist sensibility to the theatre of the Restoration and one of its major stars, one-time tart and orange-pedlar, Nell Gwynn.

After the Absolutely-No-Fun-Will-Be-Had years of Oliver Cromwell’s Commonwealth, London during the reign of Charles II was party party party. And happily, for the audience, there is nothing like a really bad sausage joke, allusions to rumpy-pumpy and luscious bosoms offered up like peach blancmanges at a vicar’s tea party to make for an evening of brilliant entertainment; and a light-fingered take on one of the more bawdy periods of English history.

And so it begins, with hapless playwright John Dryden (Steve Corner) suffering writer’s block under the intense pressure of supplying material for the ravenous London public. His company, the King’s Players, is in fierce competition with the rival Duke’s mob. They pinch ideas from each other, Shakespeare, the Greeks and anyone who will stand still long enough to be plagiarised.

More stress is applied when Charles II (Lloyd Allison-Young) decrees that, for the first time, women will be allowed to appear on stage. As Mr Dryden wails, how will he ever write a female part for a – gasp – female? Ironically, it’s a problem still plaguing many male playwrights. But never mind.

Mr Charles Hart (Rupert Reid) is the Players’ romantic leading man and when he hears Nell Gwynn (Bishanyia Vincent) giving his colleague the sharp end of her wit, he decides she has what it takes to become an actor-ess. And a star is born, albeit reluctantly and with a few hiccups. She’s illiterate for one thing and for another, the former leading lady, Mr Kynaston (Steven Ljubovic) is outraged and, in her new supporting role, delivers more ham than the Empress of Blandings. 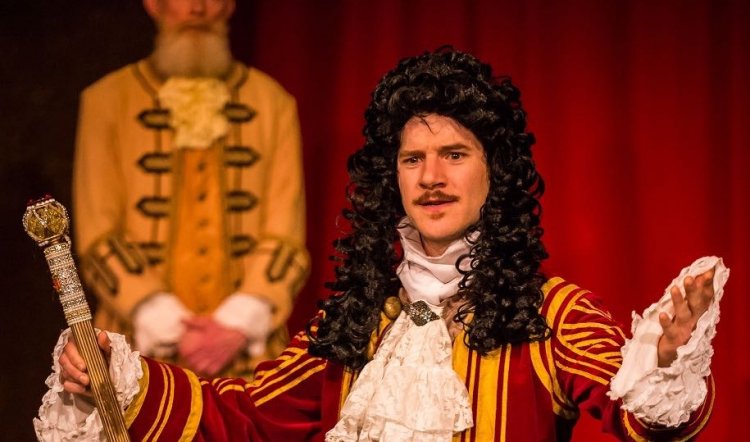 No matter, company manager Mr Killigrew (Shan-Ree Tan) knows the show must go on and please the King and the crowd. If Nell brings them in – so be it. In reality Nell’s theatrical career was just seven years long and she retired to the King’s pleasure at 21 (do the maths!). Swales necessarily takes liberties with time and tide to fill her almost three hours-including-interval spectacle with story, song and dance.

As it happens, Charles II was an avid fan of female pulchritude. Although married to the long-suffering Catherine of Braganza (Genevieve Muratore) for political purposes, Charles pretty much filled the House of Lords for generations to come through his – at least – 14 illegitimate offspring by – at least – 12 mistresses. Nell Gwynn was the mother of two and his avowed favourite, either beating off or putting up with such competitors as snarky Lady Castlemaine (Kate Bookalill) and the French confection, Louise de Keroualle (Naomi Livingstone).

Nell was no slouch either, from Charles Hart onwards, she kept her end up with the best (and also like so many of her day, died at 37 of syphilis-related causes). But that would be in an epilog and Mr Dryden has trouble writing those – also the beginnings, middles and ends.

Nell Gwynn is rude, ribald and mainly marvellous entertainment. (It sags a bit when Nell and the king aren’t around, but hey ho.) Director Deborah Jones has gathered a mega-cast of fine character actors and leads and with choreographer Virginia Ferris, dance captain Naomi Livingstone and vocal coach Amanda Stephens-Lee, brings London of the 1660s to vivid life. 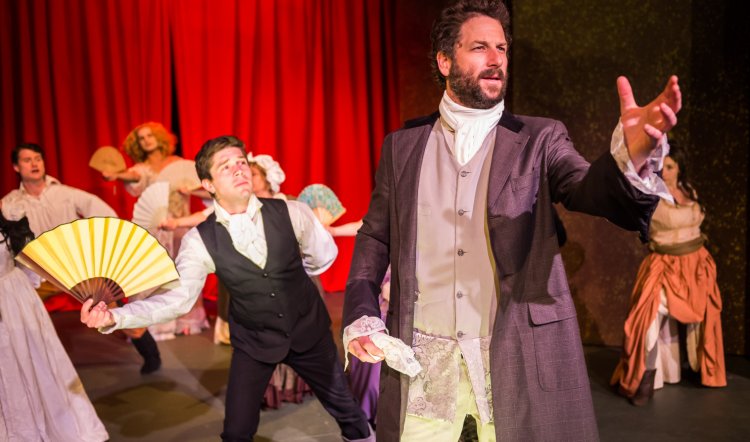 As Nell, Bishanyia Vincent has to be one of the leading role discoveries of the year. She has a near-perfect grasp of subtle comedy and the more riotous style of the Restoration; her ease and wit are backed up by substance and the evening is anchored by her charismatic performance.

As the uneasy monarch (he saw his father beheaded, don’t forget) Lloyd Allison-Young is a twinkling and captivating foil for Nell and is much more than his extravagant wig. Similarly, Rupert Reid’s delicious romantic hero and one-time love is genuinely dashing as well as heart-sick when he loses her. The chemistry between the three is both necessary and palpable!

The rest of the company brings depth, colour and character in spades to the wide range of roles and barely misses a trick. In particular, Steven Ljubovic’s pissy-prissy ex-leading lady is enchanting and funny, while Debra Bryan’s wardrobe mistress is more Welsh than a bushel of leeks and as daft as a brush. As Nell’s younger sister Rose, Eleanor Ryan is also a strong and heartfelt presence.

Nell Gwynn is a celebration of theatre and theatre-lovers – on both sides of the footlights. The jokes range from exceedingly clever to hilariously painful and the story benefits from being largely true and also larger than life. It’s a production that would not be out of place on a lavishly-funded main stage; instead it’s yet another triumph of determination and dedication from the un(der)funded independent sector.