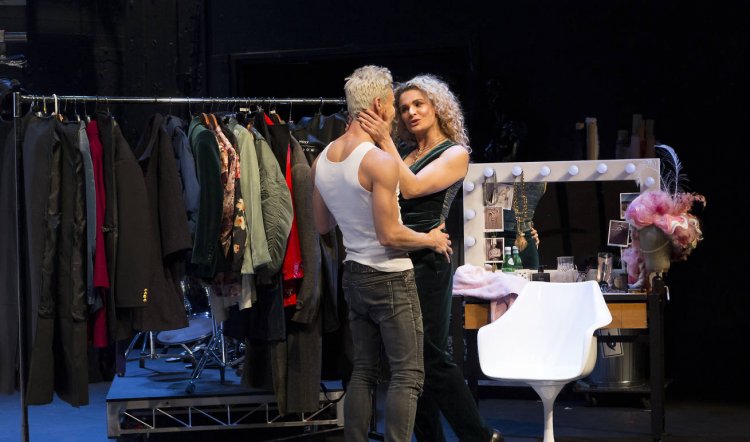 Although it’s come down to us – from 17th century France – as The Misanthrope, this all new, 21st century Australian version could easily take the rest of the original title: The Misanthrope or The Cantankerous Lover, so tempestuously crabby is Danielle Cormack in the title role.

Freshly translated and re-rhymed by Justin Fleming, this Misanthrope has also been reimagined by director Lee Lewis. The original grumpy old antihero Alceste is now a gorgeous, prowling cougar, while the object of her gaze is a pouting, Vogueing, pop star – Cymbeline – in the buff and knowing body of Ben Gerrard.

This is the third director/writer collaboration between Lewis and Fleming after 2012’s successful School for Wives – for Bell Shakespeare – and the wildly funny first co-pro between Bell and Griffin, The Literati of 2016. Both combined to hilarious effect broad Australian humour with the pernickety tropes of the French royal court – the latter produced on Griffin’s home stage at the Stables with its compressed space adding to the fun. In between those two, Fleming also re-versified Tartuffe for Bell, with Peter Evans directing a riotously silly production. Moliere is a gift that keeps on giving, it seems.

The Misanthrope travels a different trajectory, however, and anyone expecting another uproariously daft experience will be disappointed. Times have changed – 2016 was a watershed year for the political and social zeitgeist, you may recall. The world has become a bleaker, darker place, with the rise of gross populism, unashamed racism and a general disregard for cruelty now – God help us – almost the norm. 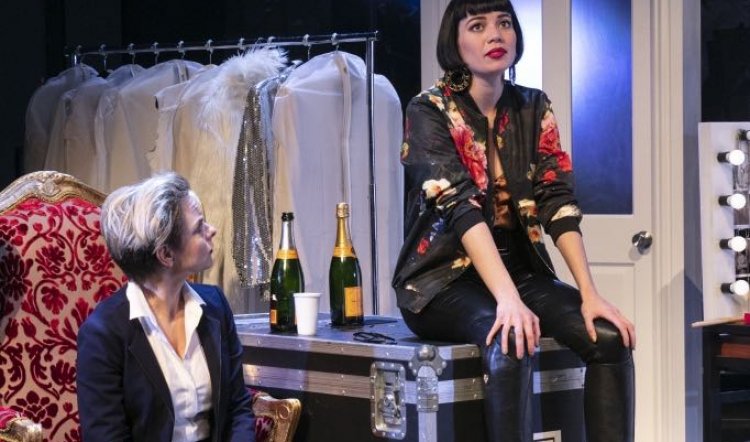 Alceste’s ill-humour at the hypocrisy and dishonesty that surrounds her therefore seems unremarkable. And while her enraged jealousy over Cymbeline’s free way with his favours is possibly the most genuine emotion on display, it’s also incongruous. The casual amorality and disdain for the plebs of Louis XIV’s court meshes so well with the identical duplicity and dishonesty of our current government, Alceste is now out of joint with both times.

The Misanthrope, accordingly, is a sadder play than might have been intended. That Alceste is the strong woman ridiculed is an uneasy thing in #MeToo times. (Although the lion’s mane-hair jokes are funny, as delivered in mimicry by Rebecca Massey’s brilliantly entertaining lawyer-frenemy Philippa).

There is much to enjoy, nevertheless. The under-used and under-appreciated Hamish Michael makes the very most of his two roles, aided by a strategically-sited backdrop and swiftly replaced items of clothing. He turns the lugubrious would-be balladeer Orton into an almost (almost) tragic figure with witlessly pretentious songs, while his Cleveland, would-be lover of Cymbeline, is just witless and not tragic.

As Cymbeline’s sister and thankless general factotum Eleanor, Catherine Burke is an eye-catching presence and when she finally gets to have her say, does rather more than that. The same can be said of Simon Burke’s menacing but fleetingly present Arsenio and Anthony Taufa’s blinged-up Angus. 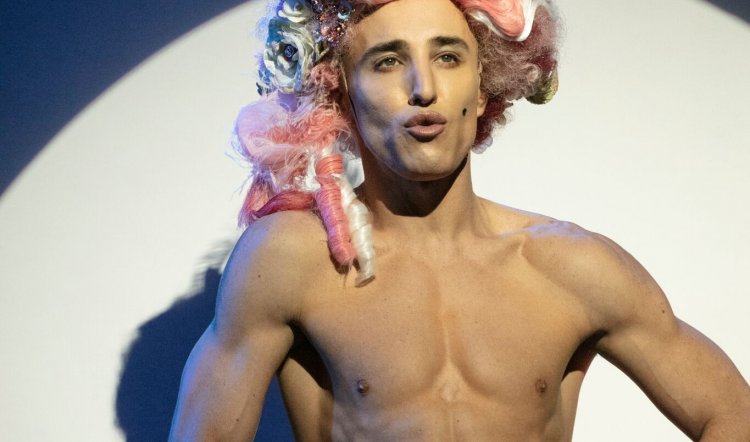 The bulk of the action and spectacle goes to Alceste, Cymbeline and Philippa, however, and they are visually spectacular as well as energetic inhabitants of their roles – including an ear worm of a song sung by Cymbeline that composer Max Lambert should immediately release.

Set and costume designer Dan Potra has lavished colour and nonsense around the stage and for each character to great effect, while the swirling movement of those characters – further keeping the dark at bay – is choreographed by Kelley Abbey with a comical soundscape by Roger Lock. The whole is sharply lit by Matthew Marshall and he also makes the most of Cymbeline’s vainglorious tableau moments.

In the end, however, despite witty direction by Lee Lewis and Justin Fleming’s cleverly wrought verse, there is something anachronistic about the basic premise of the play(s) that will not quite transfer to 2018. The seam of comedy gold that was Moliere-goes-Mod Oz is now exhausted, no matter how much glister is applied.