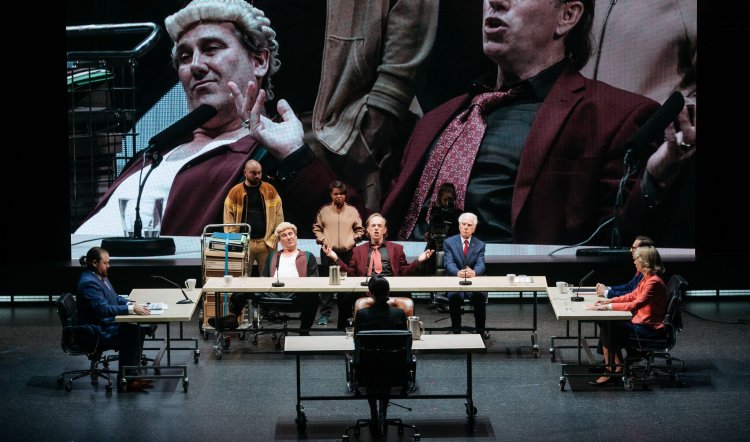 THE RESISTIBLE RISE OF ARTURO UI

On opening night of STC’s latest blockbuster, a grinch snippily remarked: “Bertolt Brecht would be spinning in his grave...” How true: spinning with frustration that he couldn’t be part of theatre now and able to utilise all the technology and possibilities available to delight, shock and bamboozle audiences. Poor Bert, stuck with plain old placards.

Director Kip Williams, on the other hand, does have it all to hand and, as he did with the remarkable Suddenly Last Summer (2015), he makes inspired use of cameras, screens and sound. And fine actors too, of course: the cast is uniformly stellar and not only because of the much-publicised presence of Hugo Weaving in the title role.

With a witty new translation of Brecht’s 1941 anti-fascist satire from Tom Wright, he and Williams have collaborated on a judicious slice and dice of the play. They have turned what can be a somewhat misshapen long night into a two-and-a-bit hour rollercoaster ride of laughter, horror and recognition. It’s concise, gripping and great.

After the incoming audience snoops on a stage where cast and camera crews are mucking about and generally preparing for the evening – with a “dressing room” area filling the  wings stage right – the opening moments are trad Brecht. A spotlit Charles Wu addresses the audience from the unlit blackness of a suddenly empty stage and tells us what we’re about to see. It’s basically a story that could have been lifted off the front page of the Sydney Morning Herald when Kate McClymont is on the job.

Instead of placards, the scene description is flashed up on a big rear screen. It’s followed by the image from a suspended camera of a round, white-clothed table centre-stage. Sussex Street isn't mentioned but on the table is a laden Lazy Susan, lots of bottles of red and lots of Chinese food. Around it are poobahs of the fruit and veg trade, Anita Hegh and Mitchell Butel, their longtime “friend”, cabinet minister Dogsborough (Peter Carroll), and a couple of watchful underlings (Ursula Yovich and Brent Hill). 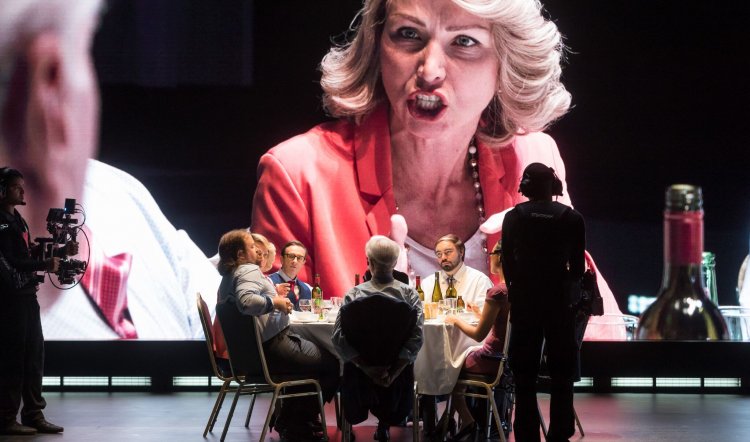 The fruit and veg people have a proposition for the minister. He has built his reputation on being a rare Mr Clean, despite dodgy beginnings, but it’s not long before it’s proved that money – enough – can buy anything and anyone. Meanwhile...

Arturo Ui (Hugo Weaving) is a gangster who aims to rule the city and beyond via the fruit and veg business: from the markets to the docks and the transport in between. His method is a mixture of corruption of the top layer and mesmerising the rest and indiscriminate violence towards any reluctance. Arturo wants in on the action: he proposes to “protect” the fruit and veg merchants and then expand operations to a new target: the city of Millstream. He is accompanied by henchmen of awesome disposition in Yovich, Colin Moody and Ivan Donato.

Brecht began in 1934 what would eventually become the finished play as he watched Adolf Hitler doing it to Germany – rather than the cauliflower trade. But Williams and costume designer Marg Horwell don’t go the easy Nazi route, nor rub in the obvious Trump analogies. These people might be seen in the aisles at Flemington or Paddy’s markets, or at Parliament House in Macquarie Street. And the mugs watching on in hopeless disbelief are us.

The use of cameras – in particular one operated by prowling, black-clad Justine Kerrigan – is integral to the production. The actors find an uncanny balance and timing between stage and film performances and they are seamlessly choreographed with the cameras, the deceptively empty set and the big screen to stunning effect. (Set designer Robert Cousins and lighting designer Nick Schlieper making the most of everything in an effectively stark, minimalist fashion.)

During the resistible rise there are some wonderful set pieces. Mitchell Butel as an up-himself actor trying to teach Weaving’s Arturo how to talk Shakespeare and walk and sit like a leader is hilarious. Well it is, until you think about our political leaders being coached and spin-doctored into facsimiles of caring leaders. 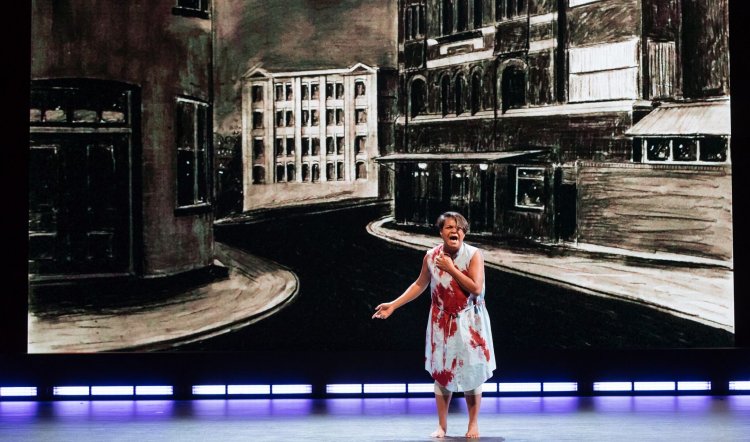 Another scorcher is the sequence in which a commissioner investigates corruption in the fruitology business (Monica Sayers in one of several roles). She is casually dissed by Ui and his boys in a lengthy scene – partially screened, partially staged and smoothly melded – where Dogsborough semi-carks, a witness is offed, lawyers blarney and chaos reigns. And it’s dominated throughout by a performance of supreme power and unlikely subtlety from Hugo Weaving.

Civic calm also becomes elusive when Ui and Co move on Millstream where Dullfleet (Tony Cogin) the editor of the local paper, stands against the tide of corruption. Backed by nicely tory Mrs Dullfleet (Hegh again) they are as saplings in the path of a tsunami of ruthless indifference. (At this point it’s hard not to think about the Cheeto of Mar-a-Lago.) And all the while, the action and story are highlighted, pointed up and wrapped in a fabulous filmic soundtrack from composer and sound designer Stefan Gregory.

In the end, amid increasingly nervous laughter and mayhem, there is a kind of hope, a kind of resolution. But we the people are not allowed to get away with our complacency and cluelessness. The last words float across the lights: “Do not rejoice. The world has stood up and stopped the bastard, but the bitch that bore him is in heat again.” The Resistible Rise of Arturo Ui is brilliant entertainment – Recommended without reservation.