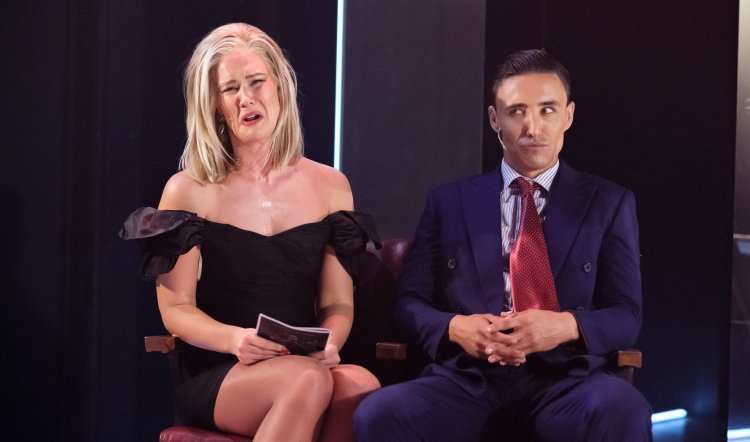 AMERICAN PSYCHO – THE MUSICAL, 88 Arts & Two Doors Production and Hayes Theatre Co at the Hayes Theatre, 16 May-9 June 2019. Photography by Clare Hawley: above - Shannon Dooley and Ben Gerrard; below - Ben Gerrard and friends

Having never read the original novel nor seen the movie – I can’t do horror – I approached the opening night of American Psycho – The Musical with trepidation. It’s impossible not to know something however, because Bret Easton Ellis’s notorious 1991 book is one of the defining cultural icons of late capitalism, albeit drenched in the blood and gore of many murdered women.

Nevertheless, it becomes clear, as the two-plus hours of the musical unfold, that the psycho of the title – Patrick Bateman – could have worked in the same building as Wall Street’s Gordon Gekko and they’re indistinguishable, one from the other. They could have shopped for stripey braces side by side while planning who next to individually kill (Bateman) or mass destroy (Gekko). They are hero or villain depending on your politics or number of Cayman Island accounts. And they’re very Sydney 2019.

And horror can take many forms: 30 years on, American Psycho is banned in Queensland (Category 1 or 2 restriction) yet Clive Palmer is free to waddle into federal parliament. It’s a reminder that not only does Premier Joh’s Peanut Curtain still obscure the Deep North, but also that silliness turns to authoritarianism with terrifying ease, if unchallenged.

Nevertheless, there’s nothing silly about Patrick Bateman (Ben Gerrard). And his psychopathy is hardly unusual – just read the business pages or international political news – it’s just a bit rampant with some narcissistic personality disorder and daddy issues in the mix. Patrick treats Donald Trump’s Art of the Deal (mentioned 41 times in the novel) much as a good Catholic boy would treat his Missal. And he tells a police officer he’s having lunch with Cliff Huxtable, which would have been a cute joke back then. 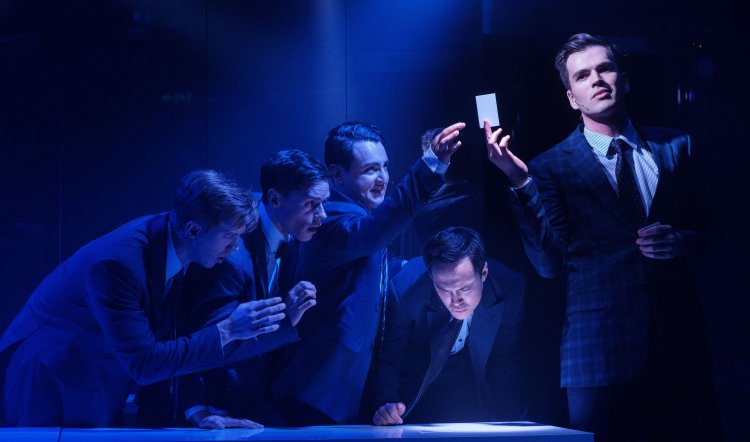 Being passionate about coke, booze, sex, money and status was the norm when “Greed is good” was the morning mantra, what sets Patrick apart however is that he rents the video of Nightmare on Elm Street 37 times and worships director Wes Craven’s Freddie Kreuger character. Adding to the overall impression of a very bad dream is the music of the day – Phil Collins, Tears For Fears and Huey Lewis and the News, for instance.

The latter’s “It’s Hip To Be Square” is a mocking anthem for Patrick, who is not perceived as quite as awesome by his peers as he thinks he should be. Indeed, one of the show’s original numbers is about the quality and style of business cards – and we all know that these things matter. Although perhaps not quite so much as they do to Patrick, for whom a substandard card (the card neither thick nor creamy enough) is a reason for homicide.

The musical, with music and lyrics by Duncan Sheik, book by Roberto Aquirre-Sacasa, premiered at the Almeida in London in 2013 and was a major fringe success. A further workshopped and on again-of again production opened and closed on Broadway in 2016: too soon or not soon enough, perhaps.

Aside from straight up murder, American Psycho – The Musical is not unlike a drama-documentary of the times: awful people being awful. Patrick’s colleagues and what passes for buddies are deeply shallow, the women are decorative and either sex aids or office factotums. (Don’t bother to #metoo or think feminism – neither is the point here and outrage would be irrelevant in the face of historical realism.) 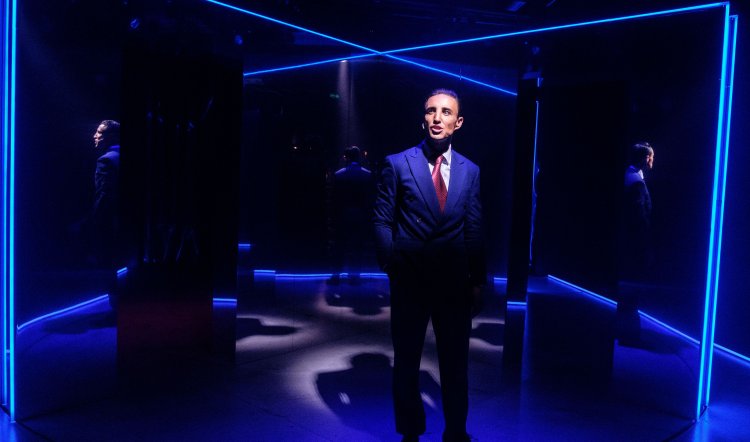 The original electro-pop-disco score is gloriously managed at the Hayes by Andrew Worboys with sound designer Nick Walker. The ensemble of 10 – plus-the omnipresent Gerrard – is spectacularly on form with choreographer Yvette Lee working eye-popping miracles with them and Isabel Hudson’s constantly-turning kaleidoscopic set.

Everything ghastly and gorgeous about New York in the ’80s-’90s is captured in three mirrored, minimal yet glitzy spaces. Neon strip lighting and sharp spots leach out any vestige of humanity while piquantly reflecting the audience back to itself and multiplying the snazzily-clad protagonists (director and lighting designer: Alexander Berlage, costumes: Mason Browne).

Ben Gerrard is simply spectacular in a production that yet again underlines Hayes Theatre Co’s pre-eminence. This is a brilliant staging of one of the more challenging topics in musical theatre (Sweeney Todd notwithstanding). American Psycho – The Musical is exciting, dazzling, crazy, unreal, too real, awful and an awesome night out. Don’t miss it.