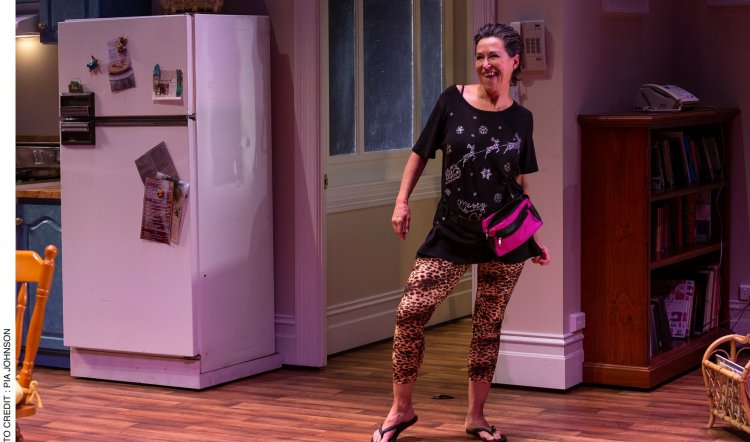 Australian Realness, written by Zoe Dawson, is not the drawing-room comedy you might think you are about to see. With a spacious, open-plan kitchen-living room set (design: Romanie Harper), our protagonist bourgeois wife (Linda Cropper) dressed in Country Road with a string of pearls, and her husband (Greg Stone) are preparing for Christmas. With a pregnant daughter (Emily Goddard) at home on the couch, they wait for their financier, cokehead son (Andre De Vanny) to arrive. Oh, happy day…

It is only when it is pointed out that the Christmas tree is a mere splinter and something bigger and better is required, while obviously empty wallets are being thrust about, that you realise all is not well for this upper-middle class Fitzroy-dwelling family. Like much of the play, as it turns out, it’s not clear what has led them to rack and ruin, but to make ends meet they have rented out their backyard shed to a “wrong side of the road” couple and their ne’er-do-well son. The father, a bogan with a big heart, (also Greg Stone) is a labourer on the flats being erected next door (noise noticeable). His wife (also Linda Cropper) is a hard-nosed, beer-drinking, don’t-muck-with-me type. 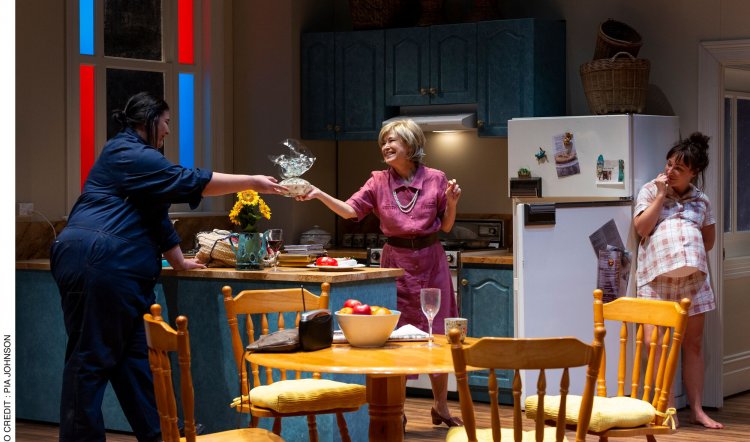 The comedy splinters into the depths with satire mixing with the reality of the harshness and inequity that is the Australian way. Out of left field, the bogans’ no-hoper son learns how to invest. Meanwhile, the financier son is stealing from his parents to fund his coke habit. The daughter – actually the lynchpin of the piece – is oblivious, she wants things to stay as they were, she needs the cocoon of her family home and wants it to include her partner (Chanella Macri), also a blue-collar worker, who lives in “Preston”.

With the lives of the haves and have-nots forcibly intertwined by Linda Cropper’s bogan, the home disintegrates – quite literally. The daughter is forced out into the surreal world of the exploited artist, which is experienced by the audience in the form of an addition to the mix of multi-media to depict a post-apocalyptic wasteland. 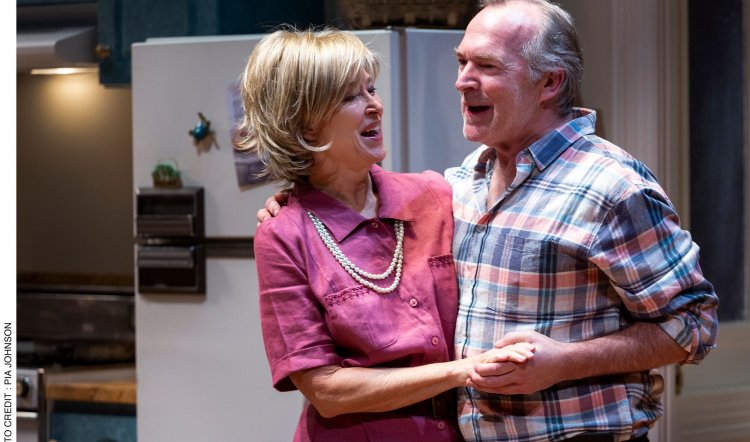 There are some great themes in this piece, perhaps too many, and some fine acting, but the director (Janice Muller) has a hard time bringing it together. A few cuts to the script may have helped. Linda Cropper is stellar. Her fellow actors all make a good fist of it.

As the playwright suggests, there is something scary happening in Australia: the growing inequity, the growing gulf between the rich and the poor. This play is timely, but unfocused and less than adequate and would benefit from dramaturgy.