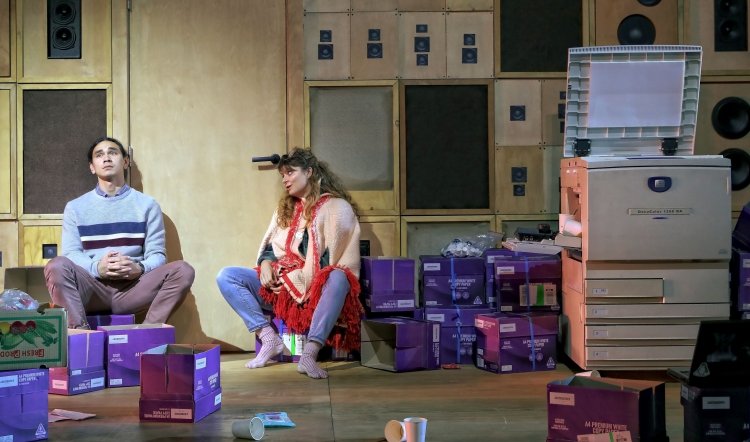 Revenge is said to be a dish best eaten cold, however, it’s possible that most women would prefer it served up from Van Badham’s recipe: spicy hot and with extra laughter and ribaldry on the side.

For her satirical rom-com Banging Denmark, the playwright and social commentator has plundered the grim trove of her own experiences with online trolls. These are a subculture of misogynistic men for whom their failure to get a female sex partner is seen as a feminist conspiracy – rather than their own failing as sub-human beings.

Although it might seem like an unlikely source of either rom or com, Banging Denmark is an equally unlikely and illuminating source of both as well as a guide to modern life. Appropriately it opens with a bang as online late-nite show host Guy DeWitt (TJ Power) exhorts his always anonymous all-male audience to get out there and grab pussy – and other similarly presidential behaviours.

The show program warns: “Strong language, adult themes, sexual references, theatrical haze.” The haze is the most innocuous use of the substance in recent times. The rest is all there in spades and is neither innocuous nor gratuitous. This is how it is in the subterranean world of the Incel – the underground where pathetic sub-males get to believe they’re Hugh Jackman without ever understanding that he’s a real man and they are not.

Guy (pronounced the French way – rhymes with pee and starts with a hard G) lives in bachelor squalor: grubby undies and pizza boxes everywhere, but his listeners hear that it’s actually a yacht and he’s living the dream while dishing the dirt to them on every aspect of their quarry and enemy: women. It’s a powerful and chilling scene, punctuated by a chunking hard soundtrack (Clemence Williams). 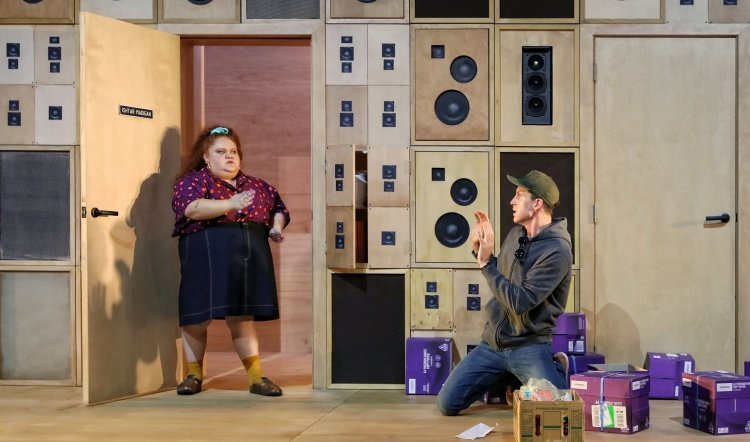 Guy’s apartment is at one end of a wide space in front of a towering back wall of industrial size and strength speakers (Renee Mulder set and costumes). At the other end is an office and a jumble of copy paper cartons and a large Xerox machine. In between are three doors set in the back wall and these are used farce-style throughout. It’s simple and clever, and appropriately lit by Veronique Benett.

Guy is a nasty prat who revels in his hegemony over an unseen mob of sycophantic losers. Between them they have bankrupted feminist academic and gamer Ish Madigan (Amber McMahon) via a suit for slander – she spoke the truth and it was no defence. Now Ish is living in her office, afraid of further attack and desperately trying to complete her doctoral thesis.

Ish’s main contact with the outside world is her friend and assistant Denyse (Megan Wilding) and Denyse’s friend and co-worker Toby (Patrick Jhanur). Ish brings food, Toby brings sympathy and runs errands for both.

As it happens, Guy DeWitt is not a real name nor a real man. Guy is actually Jake, a high-earning management consultant and typical klutz with pick-up lines that were already awful when Don Juan was a boy. This becomes a problem when he falls for Anne (Michelle Lim Davidson), a librarian who tends her charges with white gloves. She has no interest in funny business, and anyway, she’s Danish.

Jake is desperate to crack her defences and none of his usual schtick is working. He approaches Ish with a fistful of cash and a plea for help. She is, after all, an expert in all things feminist and female. As the show blurb succinctly puts it: “So, what’s stopping her? Oh, you know, just ethics, morals and every fibre of her being.” 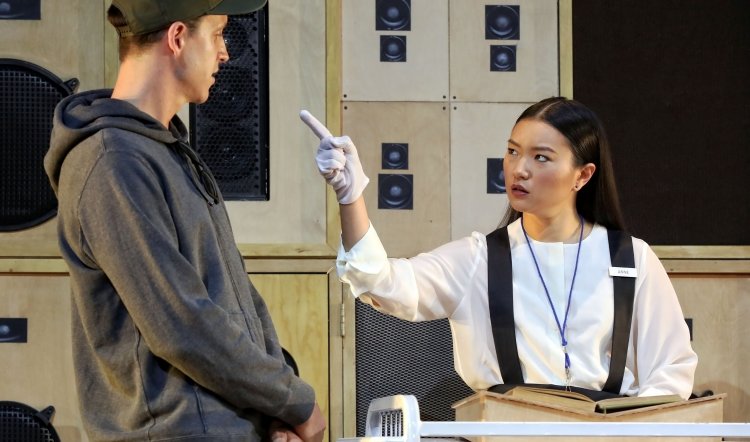 What happens next is a mix of funny and poignant, unexpected and polemical and all powered by a steady stream of one-liners that would make David Williamson jealous.

The production is blessed with two of the funniest women to be found on a Sydney stage: Amber McMahon is a comic talent whose physicality and intelligence make her a riveting and hilarious presence, and the fun she has with Ish is tangible. In support, Megan Wilding goes from strength to strength in stage craft and in this instance, her MMA skills are a priceless element of character.

TJ Power manages the unforgiving but essential straight roles of the git and the goose with assurance and – eventually – charm, while Patrick Jhanur and Michelle Lim Davidson are also good and strong as the decent fella and the frosty librarian.

The fine cast and the show are polished and guided by Jessica Arthur. Her work as a director is increasingly impressive – especially tricky ensembles and texts (think The Wolves at both the Old Fitz and Belvoir). It’s a joy to watch the actors and their seamless expertise papers over the occasional cracks in the text and also maintains the pace necessary to keep the comedy afloat and crackling.

Recommended – with reservations for those unaccustomed to toxic masculinity.