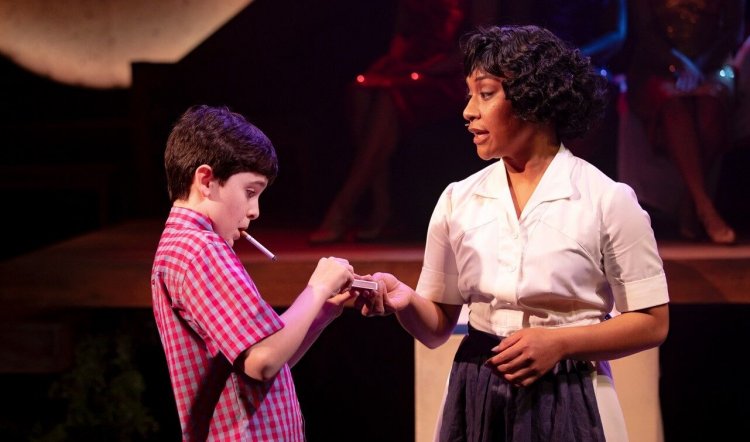 Any fan of musical theatre must surely know by now about the Hayes Theatre and its production company: dedicated to mounting the musicals we would not otherwise see. That means the thrill of the lost-and-found, the unknown-and-unlikely and the shows that commercial producers won't take a punt on, such as American Psycho, In The Heights, Freeway, Heathers and Catch Me if You Can; or ingenious reworkings of classics such as Calamity Jane, Sweet Charity and so on. And now, yet again, something completely different!

Caroline, Or Change is based on book-and-lyricist Tony Kushner’s childhood in 1960s Louisiana. Set in 1963, a Jewish family, the Gellmans live upstairs while downstairs their “negro” maid Caroline toils over a washing machine, recalcitrant dryer and ironing board – when not being a drudge in the rest of the house and even cooking and serving at table on occasion.

Caroline Thibodeaux, (Elenoa Rokobaro) is a divorcee whose four children mean she is trapped in her job, for a niggardly $30 a month. She barely scrapes by. She is quietly angry but finds some relief in her church (cue Jeanine Tesori’s glorious gospel flavoured music). Otherwise her transistor radio is an energiser as it blasts the new black Motown sound (cue a Supremes-style trio of Alexandra Fricot, Ruva and Emily Havea).

Upstairs, young Noah (Ryan Yeates) is miserable and lonely following his mother’s death from cancer. His grieving, distant musician father (Andrew Cutcliffe) practices the clarinet and has remarried. Rose Stopnick-Gellman (Amy Hack) is the new stepmother and Noah is openly hostile. He retreats to his beloved Caroline, where the ritual of lighting her one cigarette is the highlight of his day.

The change of the title takes double significance in the narrative. Caroline’s daughter Emmie (Nkechi Anele) is a teenager discovering the burgeoning civil rights movement. Her new politics cause her to overlook her mother's dedication and disparage her job as a servant. 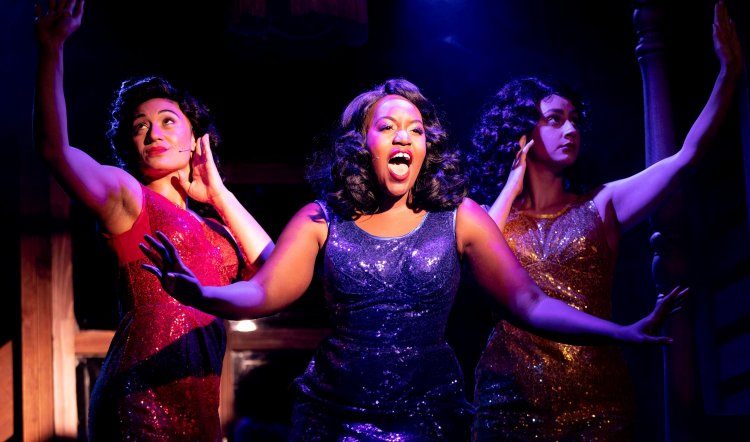 On the other hand, young Noah constantly leaves small change in his trouser pockets. The conscientious Caroline empties the coins into the bleach can where they accumulate. She waits on Rose retrieving them for the boy and is disturbed when she is urged to take the money to teach Noah a lesson.

Caroline, or Change is through-sung with almost no spoken dialogue. Tesori’s music is a many-hued thing, illustrating and counterpointing the era and the cultures of both families. As well as the surging Motown sound and rousing gospel, there is klezmer and jazz, while the Moon (also an impressive Ruva) is an operatic soprano.

The Moon is a typical Kushner fantasy figure, along with the washing machine (Ruva), a bus, the dryer and a non-fantasy figure of Caroline’s former husband, abuser and one-time handsome man (Elijah Williams). The inanimate objects occupy the basement level within the ingenious dreamlike creation that is the Gellman house. As well as Caroline’s domain there is Noah's bedroom, the dining room, a balcony and a huge Louisiana moon, drapes of Spanish moss and ornate lighting. (Simon Greer – set design, Alexander Berlage – lighting, both spectacular achievements along with Melanie Liertz’s costumes.)

In the narrative of these lives there is a Hanukkah dinner, cooked and served by Caroline and her girls, and attended by wildly racist Grandpa Stopnick (Tony Llewellyn Jones) and Stuart’s well-meaning mother (Genevieve Lemon). It’s the catalyst for another kind of change as long-simmering bitterness erupts between white and black.

The domestic dramas echo the wider travails of the South at that time: President John F Kennedy is assassinated, Martin Luther King has risen to peaceful prominence. The first means little to the black populace – because JFK had promised much and not delivered, while Dr King’s rise symbolises real hope. As we know, that hope was short-lived for the Thibodeaux family and millions more like them. 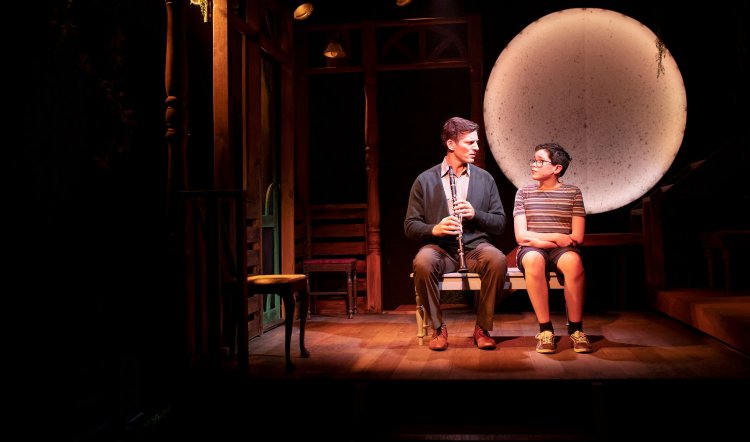 Through it all, Caroline is a stoical, heroic presence, brought to life by Elenoa Rokobaro. Finally rising from the ranks into a starring role, she is magnificent. Sharp, contained, acerbic and moving, it’s an electrifying performance. There isn’t a weak link in the company, however, and its depth is signalled by the casting of top-flight Llewellyn-Jones and Lemon in cameo roles.

Ryan Yeates (alternating the role of Noah with Daniel Harris), was also superb both as a singer of sophisticated music and in playing the boy who is rarely offstage or silent. Amy Hack is also fine as the newcomer whose empathy deficit doesn’t stop her trying her brittle, lemon-lipped best.

Caroline, Or Change is unusual and unusually rewarding. It’s not just the subject matter – that demands a majority black cast on a Sydney stage – but also its dynamic, fragmented score (terrific sound design: Anthony Lorenz) and the unsentimental view of its characters and story.

Director Mitchell Butel has handled the demands of the music and stories with deceptive facility. He understands the nuances of class, race and history that underpin the show and the result is actors richly and authentically filling their roles. It’s unlikely you’ll see a more entertaining, rewarding show this year. Recommended without reservation.