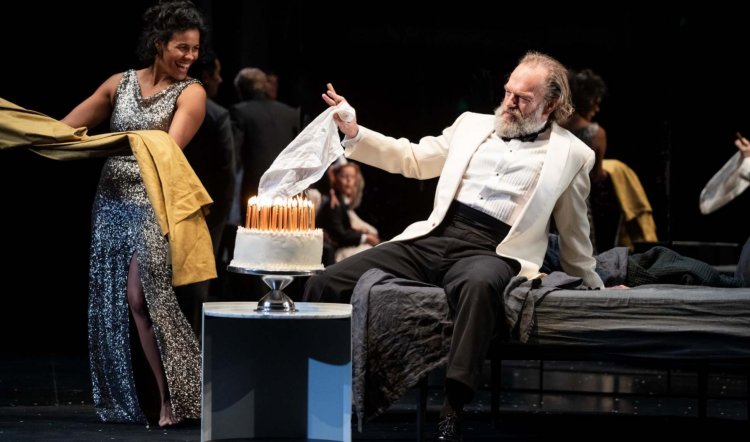 CAT ON A HOT TIN ROOF

The opening moments of STC’s Big Classic for 2019 are electrifying if divorced from what happens over the next three hours. The cavernous height and depth of the Ros is spot illuminated front and centre as Zahra Newman sings a soaring verse of “Cry Me A River”.

Newman is an exceptional talent, and although she’s tagged in publicity material for Book of Mormon, a more accurate measure would be her solo performance of Random by Debbie Tucker Green –  Belvoir, October last. However...

Newman is Maggie – “the Cat” – of Tennessee Williams’ 1955 masterpiece and she’s magnificent in the demanding first act wherein she barely draws breath or stops her prowling as she dons and discards frock after frock (excellent costumes: Mel Page) in the bedroom she shares with husband Brick (Harry Greenwood). The reason, famously, is an assault by one of brother-in-law Gooper’s brood of five obnoxious brats: “One of those no-neck monsters hit me with a hot buttered biscuit so I have t’change.”

Meanwhile, throughout, Brick’s butt and bod have been on display in a fogged-glass shower cubicle and he finally calls a response that typifies his attitude to Maggie: “Waddya say, Maggie? Water was on s'loud I couldn't hear ya.”

Fact is, Brick doesn’t ever hear Maggie as his ears are focused on the splish of whiskey on cut crystal. He is self-medicating towards oblivion and death. Ironically, Brick’s creamily bodacious form is, in this production, the most alive element of the Southern Gothic landscape: the embodiment of the Deep South’s magnolia blossom – lushly desirable before descending into poignant decay. 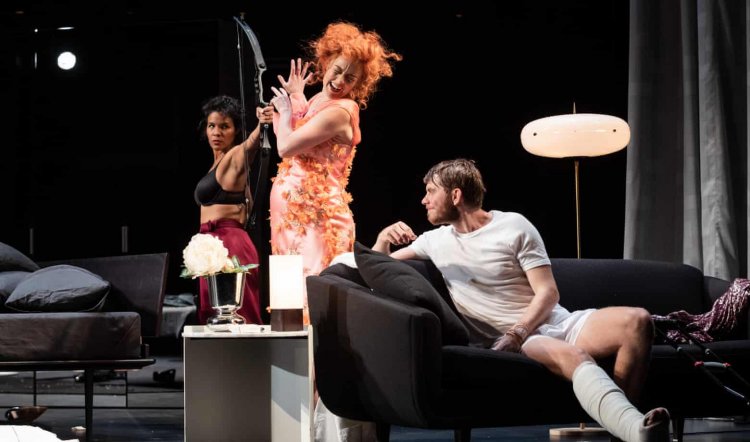 Cat On A Hot Tin Roof is set in the Pollitt family mansion amid, “28,000 acres of the richest land this side of the valley Nile,” – as the patriarch is overly fond of repeating. It’s a line Williams deliberately used to critique the mythical America of which Ivy League academe was also overly fond.

This mansion however, allegedly updated to the present, looks like the victim of a staged-to-sell design service. These are the folks that kit out Sydney real estate in misty grey, charcoal, ivory and taupe with sharp edges sufficient to flay a hog. With gloomy open spaces, mirrored closets, a TV on which Mike Pence’s mean mug is spied, and a huge matt black column, David Fleischer’s set is unlikely and incomprehensible.

Nick Schlieper’s lighting is also razor sharp and bleak except for a wall of Kerry Packer-style SCG lights that blind and startle when momentarily flashed – to signify birthday and emotional fireworks. As these are accompanied by blasts of sound (composer/sound designer Stefan Gregory), the overall effect is, on repeat, simply irritating.

It’s almost a relief when Big Daddy Pollitt makes his entrance. Anticipation is heightened because the now leonine Hugo Weaving is such a charismatic movie star figure anyway, and then he opens his mouth. The rich cadences of Williams’ Delta prose roll off his tongue in gobs of lazy-ass poetry. He is the embodiment of the great, flawed patriarch and his presence is commanding.

That Big Daddy is dying of cancer and no one has told him or his wife of 40 years, Big Mama (Pamela Rabe) – in 1955 it was impolite – is why the family has gathered for his birthday. The cake with many candles is produced by Gooper’s fecund, grasping wife Mae (Nikki Shiels), then ignored as familial dysfunction takes over. 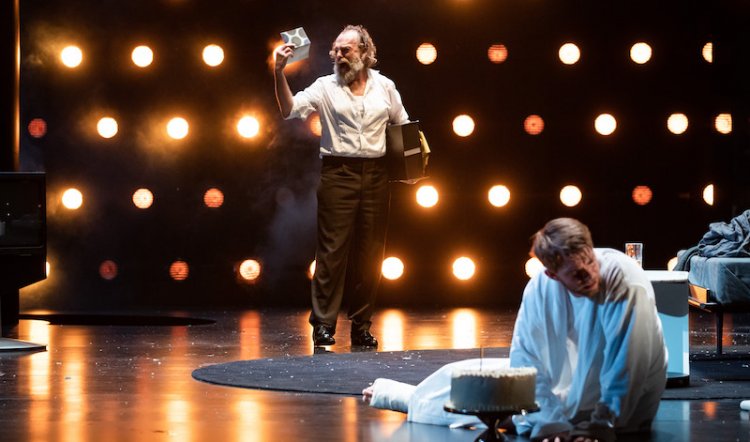 Gooper (Josh McConville in a distressed dead cat wig) is the elder but lesser son whose fragile ambitions as a lawyer are boosted and pushed by his wife. Mae’s dominant genes are manifest in the vivid red hair shared by mother and brood, while her drive to dominate the plantation’s future is even more intensely visible. On the periphery of this ill-fated mob are the unctuous fright of a Preacher (Peter Carroll), family doctor Baugh (Anthony Brandon Wong), while somewhere over the rainbow lurks the tragically dead Skipper – Brick’s best friend.

Hollywood’s Hays Code succeeded for decades in censoring Williams’ depiction of the true nature of the young men’s relationship. The forced rewrites distorted the narrative and even though later restored, at this distance the coyness heightens the self-loathing and self-pitying oppression of the main male characters. The result is a piteous series of uncomfortable truths, intended or otherwise.

Unfortunately however, the mostly shouty volume and unrelenting anger of the chief protagonists – nuance, where art thou? – makes Maggie exhausting and easily misogynised. And the vicious treatment of Big Mama by her husband, as well as the contempt for women displayed by father and son, are breathtaking.

Nevertheless, Zara Newman’s Maggie is sufficiently an outsider and the actor is in such command of her role as to almost withstand the onslaught where necessary; but Pamela Rabe seems mostly at sea between shrewish, pitiful and caricature, and never settles – into what is an unforgiving role at the best of times.

From the program’s production notes, the vision and choices are definitely those of director Kip Williams and after outstanding recent contributions to the company – Suddenly Last Summer, Harp in the South, Cloud 9, Love and Information, All My Sons, The Resistible Rise of Arturo Ui and A Cheery Soul – this one misses the target, scattering its talents hither and yon. A disappointing, deafening take on a difficult, yet what should be rewarding play.