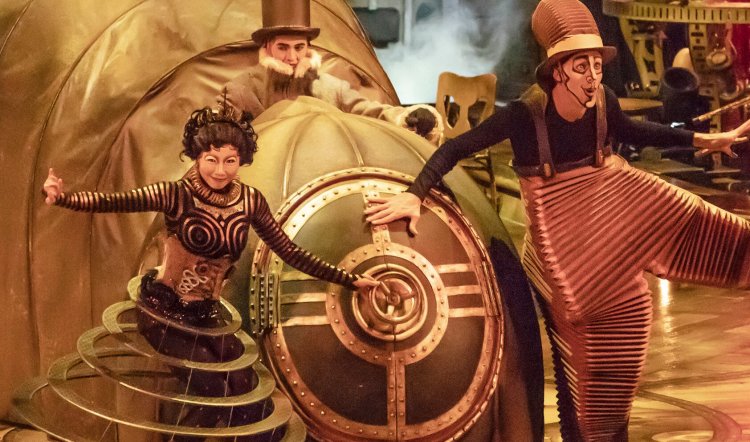 BY FELICITY AND JAMES DAYHEW (YA REVIEWERS)

The latest production by Cirque Du Soleil: Kurios brings a whole new perspective to the company. In past performances that I have seen, the characters are usually colourful, sometimes unspecific beings that usually have something to do with nature and the natural world. Kurios, however, spins that on its head, showing the audience the beginning of a steampunk era.

There are wacky gadgets, creations, mechanical beings, robots and even a kooky scientist. Technology has been woven into each and every character, making it a new experience even for those who may have been to Cirque du Soleil a few times. Most of the classics: trampoline acts, aerial silks, acrobatics, and balancing acts all have a steampunk-themed twist.

Our story starts with a scientist, Le Chercheur (or The Seeker for those of us who don’t speak French) seemingly getting ready for something. His two assistants, robots named Kurios Winch and Kurios Plunger, are sweeping and cleaning, helping their creator. On the machinery-filled stage there is a clock on the backdrop, its numbers showing us the time – 11:10.

Odd looking inventions fill the stage, in particular a large machine attached to an equally large chair with very long legs – long enough that the Seeker has to clamber up one of them to sit on it. Soon, we see the time change from 11:10 to 11:11. This time seems to be important to the Seeker as he hurries about, trying to get on his long-legged chair machine and turn it on.

And with a big crescendo of music, a mass of characters spill out onto the stage, each wearing late 19th century-inspired clothes (costume designer Philippe Guillotel). Amongst the audience, a train chugs along, followed by a band, each in their own Sunday best. Now, no longer are we in the Seeker’s laboratory, but a train station, in a much more eccentric and technological world filled with equally eccentric and technological characters. 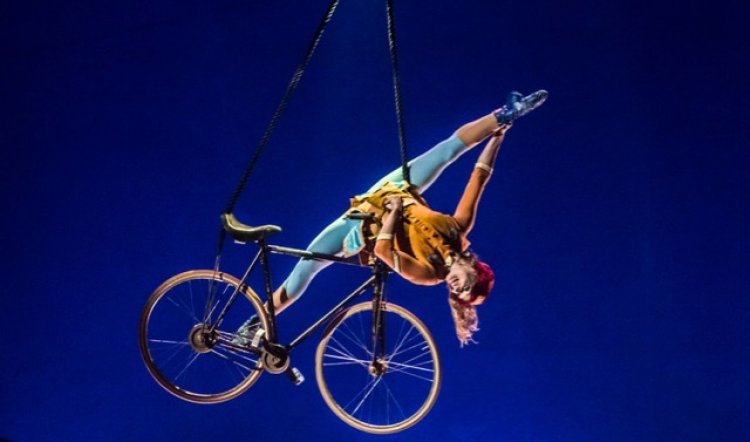 There’s a woman with a hoop skirt made of metal rings and no fabric, a man whose legs look to be made of an accordion and a man who seems to have a bulging stomach made out of the same metal you would expect in an antique submarine. The “Synchronised Chaos”, as they are aptly named, go haywire in what could be a big mess, but actually is carefully choreographed, and very pleasing to watch.

Next comes a woman on her bicycle. She rides out from above the audience! Her bicycle is suspended in the air and she performs acrobatics on it, completely upside down! Then we meet contortionists – electric eels bending and twisting in ways that looks awfully painful for those who struggle touching their toes. They balance each other in pyramids and we’re not quite sure which limb belongs to whom.

There is also my personal favourite – trampoline. Accompanied by fun music, a group of performers jump and flip on a large net, going so high it looks as though they might be able to hang onto the top of the tent!

In between most acts, there’s a comic ringmaster and even a bit of audience participation. As well he conducts the “Invisible Circus” which is described as “like nothing you’ve seen before and will never see.” Through mechanics – I mean, invisible people – the equipment on the stage moves around, and even includes a miniature invisible lion, Felipe, who causes a bit of trouble. This went on a bit long, and was a bit juvenile, though overall entertaining for the youngsters.

The costumes and set definitely stick by the steampunk theme, holding to the late 19th century aesthetic of grease and metal and wood, very rough and fun exploration. The set, while not anything too explicit or obvious, had big screws, nuts and bolts holding it together, bits of canvas, wooden planks here and there. Each costume had a little twist of something different and odd. It reminded me of the art style in Shaun Tan’s book The Lost Thing. A kind of new imagination and new ideas, not thoroughly planned out, but there and exciting 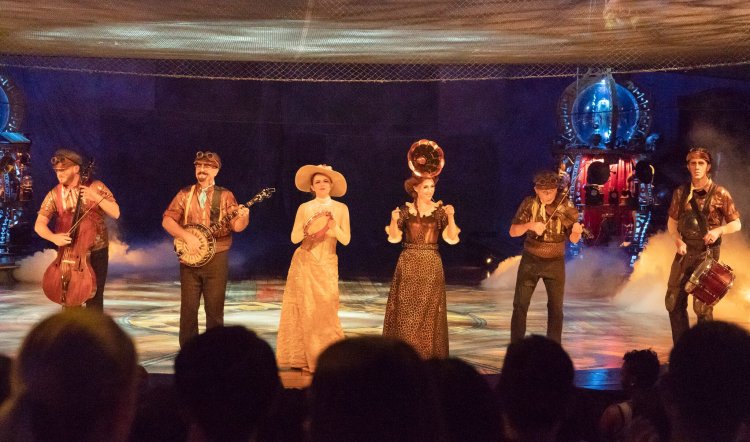 The storylines in Cirque Du Soleil have never been something I can get right off the bat. I get the gist of it, but I have to do a bit of research or look it up in the program afterwards to fully understand. And this is the same for Kurios. While I understood the basic concept: there is a scientist/researcher type figure who finds a place were imagination and technology are embraced and any wacky idea is encouraged, I did have to use the program afterwards to figure out some of the details. I think this may be part of the point: that there is never an obvious, black-and-white storyline to Cirque Du Soleil, but instead a lot of meanings and interpretations.

From time to time, the stage felt a bit crowded. I wasn’t sure where I should be looking. The clock stays at 11:11. And then, as it changes to 11:12, everyone frantically retreats, and the Seeker makes a getaway in his chair machine, arriving back in the normal world with his robot assistants. The characters overall reminded me of Commedia Dell’Arte – stock characters using basic but very enjoyable forms of entertaining the audience when not performing acrobatics or acts.

Kurios is probably my favourite Cirque Du Soleil show that I have been to, I really enjoy the steampunk ideas. It is enjoyable for all ages and genders and entertaining for everyone. But be warned, some daredevil tricks might be a bit hard to watch!

JAMES DAYHEW (bass player) reports: The music is an important part of Cirque du Soleil: Kurios. The show features a wonderful soundtrack that helps outline the mood and feeling of each act. The score was created by Raphaël Beau, Guy Dubuc and Marc Lessard with prominent elements from both jazz and electro-swing. One of the main motifs, heard throughout the music, is Hypnotique, a playful piece with a catchy descending melodic phrase, that aids in creating a playful and mischievous atmosphere in the scene it is being played over. All of the music is played by an amazing live band consisting of a violinist, a cellist, a drummer, a vocalist and two guitarists. Cirque du Soleil: Kurios is a great and entertaining circus filled with daring stunts, amazing feats and master choreography, writing and talent – and music.