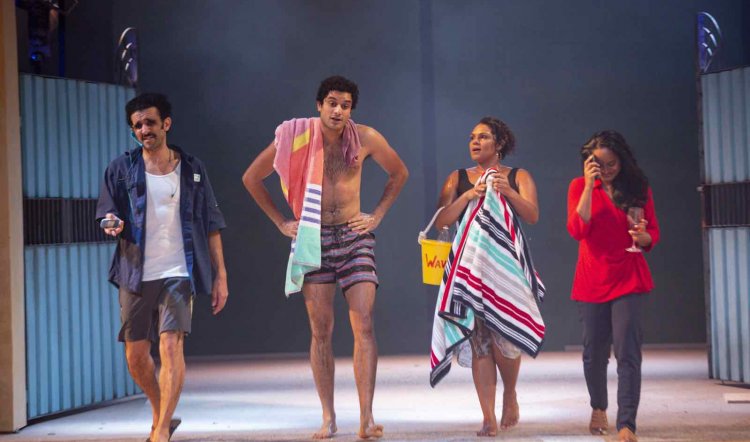 In the program notes, playwright S Shakthidharan writes, “The stories we choose to believe in underlie all our actions, thoughts and feelings. In Counting and Cracking I hope to provide audiences with a new story to believe in...”

The new story has its roots in an older one, however, and an astonishing one for longtime admirers of dancer-choreographer-cultural ambassador Anandavalli. It seems Shakthidharan is her son and this story is part of their family truths and mythologies.

Counting and Cracking is a modern Australian story – of civil war, fear, death, hope, love and redemption and a new country. It begins in Ceylon and tumbles headfirst into the divisively deadly conflict that became Sri Lanka. from there it moves to Australia as young wife and soon-to-be mother Radha flees comfortable Colombo for an apartment in Pendle Hill.

If you’re wondering how: she arrived by plane, not by leaky boat. And it was the 1970s. (See also A Man of Good Hope for more amazing post-colonial scenes.) A few years later Radha might have heard Malcolm Fraser say,

“The less constructively a society responds to its own diversity the less capable it becomes of doing so. Its reluctance to respond, fuelled by the fear of encouraging division, becomes a self-fulfilling prophesy – the erosion of national cohesion is a result not of the fact of diversity but of its denial and suppression”.

The fact that modern Australian governments, of both sides, disdain the Fraser viewpoint is what has led directly to Counting and Cracking. The play doesn’t take a linear approach however, rather it flits back and forth from Radha’s early, privileged and happy life (Vaishnavi Suryaprakash) as the grand-daughter of a venerated politician (Prakash Belawadi), to the 21st century (Kalieaswari Srinivasan is the older Radha) and Australia. There we find her son Sid (Shiv Palekar) – okay, Siddhartha, but he speaks only English, not Singhalese, he’s a bad Sri Lankan he says – being a typical young Aussie male. 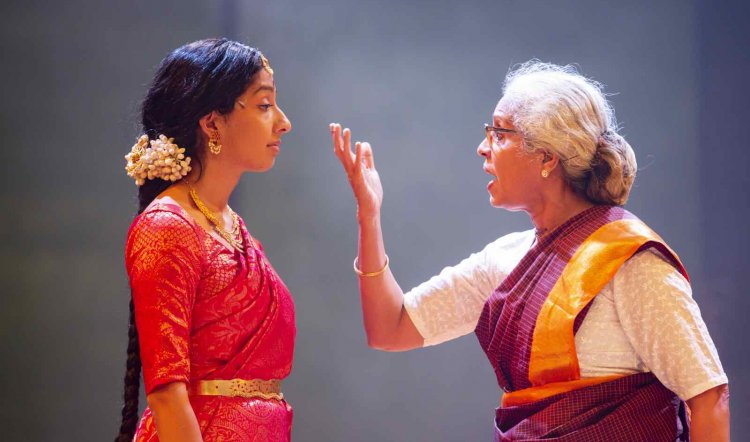 Siddhartha’s at university “studying media studies”, to his mother’s bewilderment, while living in Coogee and not properly at home with her, to her Sri Lankan annoyance. He is also becoming attracted to Lily (Rarriwuy Hick), a Yolngu law student whose strong Arnhem Land roots awaken a hitherto dormant curiosity about his own.

Sixteen actors take on many roles across four generations and two countries. The play opens with a reluctant Siddhartha being ritually washed before being entrusted with the disposal of his grandmother’s ashes. Ancestral ashes were entrusted to Colombo’s Kelani river, but Siddhartha is appalled that he is expected to wade into the Georges river and dunk himself in it.

The ashes are Radha’s last link with Sri Lanka, until a phone call turns their lives upside down. Because of the play’s time-hopping structure the audience is already aware that her husband, Thirru (Jay Emmanuel as the younger and Antonythasan Jesuthasan as the older) didn’t die in the riots, but was tortured and imprisoned.

Counting and Cracking is an epic on a human scale, moving between 1956 and 2004, between civil and family conflict, clashing cultures and hostilities between generations. It’s ingeniously told partly in Sanskrit dialogue with on-stage characters semi-simultaneously translated into English by other actors, sitting and watching from the sidelines.

Originally produced in a hall built within Sydney Town Hall, the Adelaide season is similarly contained in a hall at the Ridley Showground. where, via an all-inclusive lighting scheme (Damien Cooper), the audience is rarely separated from the players. Temporary rows of seats creak woodenly on three sides with a long, raised rectangular stage thrusting down the centre. There are metal gates to keep out the hoi polloi and signage (year and place) at the far end. (Set and costume design: Dale Ferguson.) 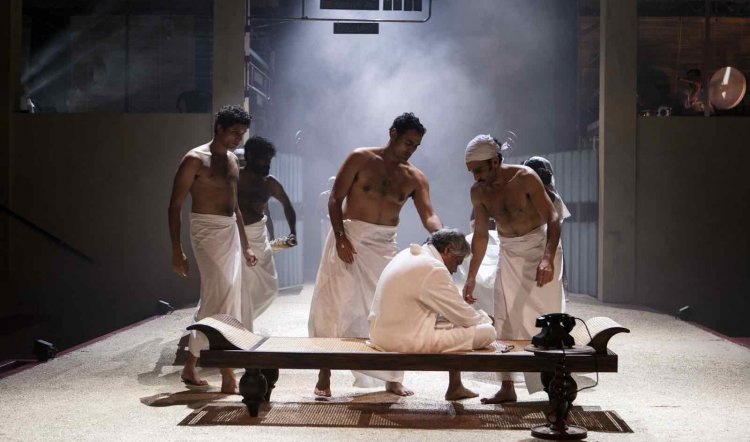 Divided into three acts running at 3.5 hours in total, Counting and Cracking is simply enthralling. It seamlessly marries the personal and political; the great moments – a country coming apart at the seams of language/racial antagonism – and the small ones – an air-conditioning man (Arky Michael) comes to Radha’s apartment to install a new unit and asks her out on a date.

It also articulates one of the driving forces at the heart of so much of the  Australian experience: where do I come from? Where do I belong? It’s bittersweet to see both Siddhartha and Lily wrestling with these questions from their different standpoints.

The stories are captivating, with rich drama and comedy arising from the confidence of the company of 16 in its director Eamon Flack.His grasp of the sprawling spectacle is vital to its success and, in the final scenes, when the climactic elements – in Sri Lanka and Australia – combine to terrifying effect, the skills at play are breathtaking.

The great Anandavalli overcame her initial reluctance to stir up the past and eventually entered into the production as cultural and costume advisor. The sense of authenticity is also enhanced through the cast – including, as well as those mentioned - Prakash Belawadi, Nicholas Brown, Ahi Karunaharan, Monica Kumar, Gandhi MacIntyre, Monroe Reimers, Nipuni Sharada, Rajan Velu and Sukania Venugopal.

Consequently, at what has to be among the worst of times in modern Australian history (see also Manus) there is hope as well as warnings in Counting and Cracking. Redemption and love are its foundations and what’s built upon them is spectacularly uplifting. The production will surely not end here.