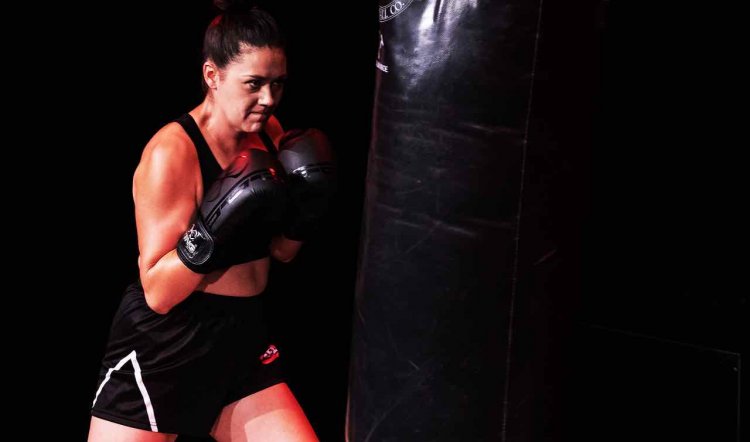 The fictional but more than probable super-athlete Suzie Flack (Lauren Richardson) won’t have a bar of the women’s Aussie Rules comp, because she wants to be the best among the best; and that means playing alongside the men. Somewhat ironic therefore to be catching up with Jane e Thompson’s play Fierce on a Sunday afternoon when, over in Adelaide, the AFLW Grand Final was underway.

The Crows comprehensively beat Carlton by the way: 10.3 (63) – 2.6 (18) in front of a 53,000 crowd. But the cost to the teams was considerable with five players injured, including Crows captain Erin Philips. She was stretchered off the ground with a torn ACL – the current reality behind an imagined future.

Fierce opens with Suzie pounding on a heavy bag hanging from the rafters of the Old Fitz. She radiates the kind of anger and frustration that would be familiar to many girls and women from being shut out of a dream. (Actually, it would be recognisable to almost anyone who doesn’t belong to the white male privilege club, members of which are traditionally blind to any but their own.)

There is a white male who sees Suzie, however, and he’s Corey Anderson (Martin Jacobs), a luminary of the game whose occupation in retirement is scouting, spotting and training the next generation of players. With a hop and a skip and a punt – suspend disbelief for this bit – he inveigles Suzie into the dressing room and into the team.

Somehow, this is sort of okay with her new team-mates (more disbelief, or perhaps, imagination required here), and although they’re as dick-oriented and heedless of their WAGs as any pro footballer in any code, they’re boofily chummy with Suzie: her skills and blind determination make her one of the boys. 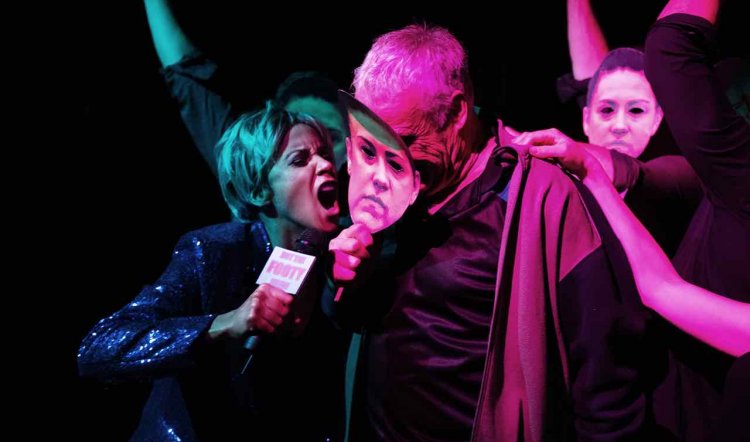 But not. Flashed up on the black walls of the auditorium come the kinds of tweets that only misogynists hiding behind anonymity can get away with. Although they include death threats, it’s the vicious, gender and sexually-targeted stuff that sticks like the filth it is. And the reduction of the female body to numbers and clinical statistics is also a powerful visual. (AV design: Genevieve Muratore.)

On the apparently lighter side, but just as threatening to Suzie’s mental wellbeing, is the media. She verbally spars with a sports reporter (Stacey Duckworth) who’s as determined to get Suzie to put her foot in her mouth as Suzie is to keep dancing just out of reach. Then there’s Melanie (Chantelle Jamieson) one of the team wives and a woman who’s initially a rather sad, lonely figure. However, her cloak of self absorption and badly hidden insecurity finally lifts enough for her to see Suzie. The spark between them promises to be dangerous.

At the same time, Suzie is having to deal with the steadily failing health of her beloved dad (Martin Jacobs again, playing at the other end of the emotional spectrum from his tough footy trainer). The relationship between father and daughter is tenderly believable and utterly sad for what it highlights.

The team mates (and other characters – Richardson is the solo pivot of the piece) are also three-dimensional, credible characters. Andrew Shaw as star player Vance Arrowsmith is an all-man, Boy’s Own hero figure who perpetually looks down his nose – and not just because he’s taller than most. Zelman Cressy-Gladwin’s young gun Liam Shaw still has a bit of baby fluff about him, but not for long, while Felix Johnston is not only a player but also the “escort” Suzie hires while she tries to figure out herself and the world in which she’s at sea.

Fierce is 85 minutes of riveting drama and unexpected laughs. Whether or not you are a footy fan is irrelevant although the action goes a long way to explaining the thrills. Janine Watson directs with subtlety an intelligence, so the surprises, twists and turns keep coming even as the characters are gradually sketched in and enhanced. 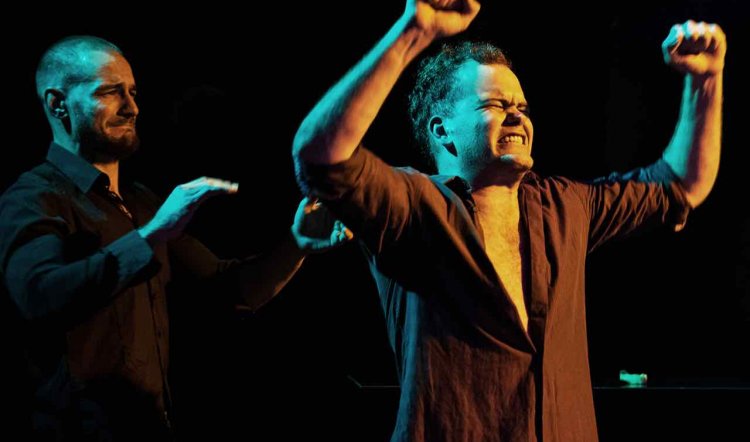 The integrated simplicity and sophistication of the set and costumes (Melanie Liertz) and lighting (Kelsey Lee) are complemented by Ben Pierpoint’s soundscape. Whether the scene has kid and dad at home watching footy on telly, players in a gym working out, in a stadium dressing room with a crowd baying close by, or at a bar where the coke and white noise are interchangeable, the creative team has achieved spectacular surroundings for the actors.

The basis of Fierce is the shock of the everyday for Suzie (and so many young women). One minute we’re watching a sullen little shit acting up, the next, one’s nerves are jangling and you lean forward in your seat – something bad is about to happen, maybe, probably, oh no, please no.

Although she’s a star footballer, Suzie is also Everywoman in how society sees her and treats her. Her physical power and inner strength don’t make her any less vulnerable. Fierce is thrilling and disturbing, funny and shocking. Recommended without reservation.