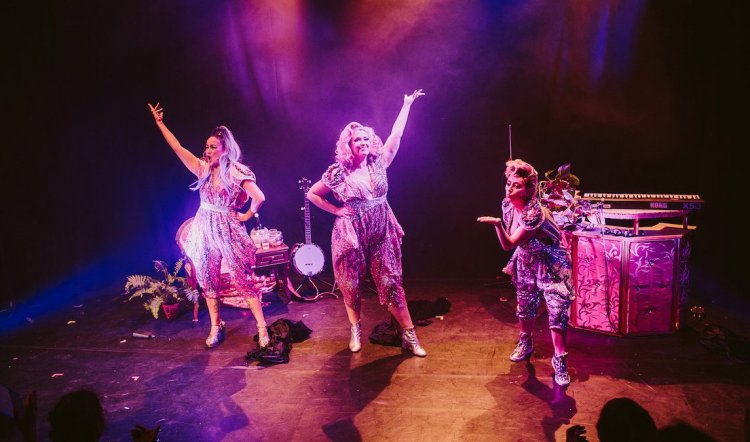 GLITTERY CLITTERY - A CONSENSUAL PARTY by Fringe Wives Club with Griffin Theatre Company and The Furies at the SBW Stables Theatre, 8-20 July 2019.

Laura Frew (choreographer/performer), Rowena Hutson and Tessa Waters (writer/performers), with an absent Victoria Falconer (co-creator and musical director) are the Fringe Wives Club, winners of the 2018 Adelaide Fringe award for Best Cabaret and since then, winners of rapturous audiences around the country and overseas.

They begin the evening, lights mysteriously low, as a somewhat secret society of the kind loved by men who shake hands in a peculiar way, wear weird aprons and goats are nervous. In this iteration however, the society is called The Cliterati and the women do more interesting things beneath their all-enveloping cloaks; then burst into raucous song and wicked dance.

Director Clare Bartholomew has devised an all-moving, high energy spectacle where each of the trio takes a character and the centre by turn (to give the other two a much-needed breather) as they rampage through a series of song-sketch-parody-political satires.

They set the tone early by taking the piss out of the sacred bulls of patriarchal power as well as instantly recognisable female archetypes. Then there is the issue of pockets. Aside from grouching about how crap pockets are in women’s clothes, it had never occurred to me until the Fringe Wives sang about it, that pockets are actually about the historical oppression of women. It makes perfect sense – and it’s very funny. 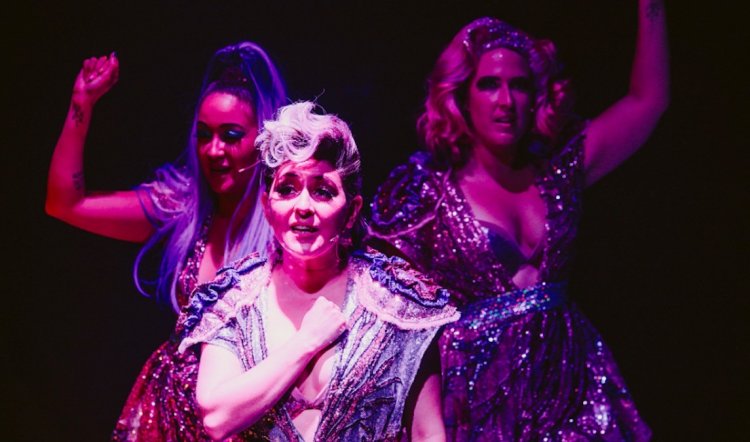 Designers Alicia Fernandez and Alice Edgeley have clad the women in sequinned, shimmering onesies accessorised variously with don’t-fuck-with-me cleavage, vulva epaulets and eyelashes that could sweep you off your seat if you don’t watch out. The result is a joyous, voluptuous celebration of females having fun and the feeling is infectious.

The mostly female audience of all ages on my catch-up night is clearly up for the ride. Just in case, however, those who might be uncertain or experiencing dick retreat are advised in the kindest and most understanding tones that it’s absolutely fine if anyone wants to leave at any time. No one does, despite the occasional stunned mullet face.

While tightly scripted – in a deliberately shambolic way – and on course for its duration, the three are so at ease with each other and their material after 18 months on the road, the ad libs and their sharp wit are a delight. They know exactly what they’re doing and they do it. A lot, and often. Glittery Clittery is that rare treat of a constant laugh-out-loud show with the gorgeous added extra of intelligence and guts.

It has been said that the show is preaching to the converted, that a feminist audience will of course love it and no one else will bother. But that overlooks the continually maturing new generations of girls – and boys – that need reminding, reassuring and even whacking out of their cones of silent ignorance. 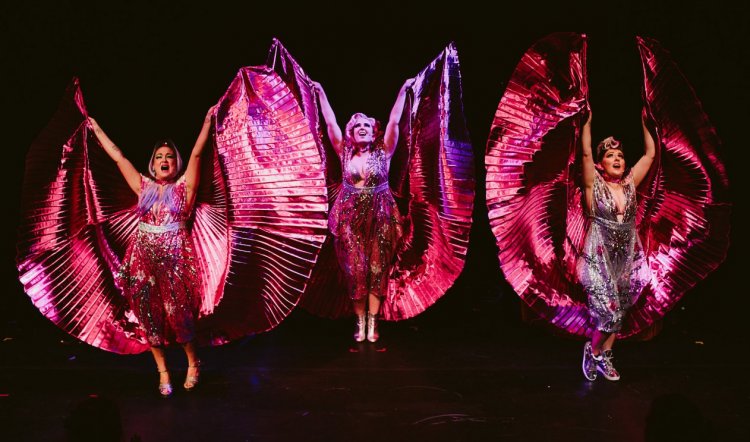 Unfortunately, Year Zero rolls round with monotonous regularity when it comes to recent history and everything old being new again. Which is all very well unless it happens to be about women’s lives and rights and the patriarchy: essentially, it has to be repeated for each generation so a bit of progress can be made and hung on to. That’s where Glittery Clittery comes in and means it’s fresh and mind-blowing for first-timers, as well as soothing balm and a pick-me-up for the older and wounded among us.

Among many sublime moments, the live quiz show The Lagoon of Mystery is a cack as well as revelatory for all sorts of reasons. Do you know, for instance, that “the Clunge” is Brit-slang for - take your pick – the aforesaid Lagoon of Mystery or the more common Garden of Earthly Delights, Mossy Cleft, Bearded Clam...and so on?

You’ll have gathered by now that Glittery Clittery is bawdy as well as beautiful and it says stuff that, unfortunately, just doesn’t get old. Take for instance, the song “He Only Hits You Cos He Likes You,” which begins with a 4-year-old being bitten by a boy in kindie. With this in mind, and also because your young teenagers definitely know more wicked words and things than you want to think about, I urge you to take them to the Stables for this short and properly shocking season. It will do you the world of good and also shove sexual politics along another centimetre or two.

Recommended without reservation, although you might pee your pants laughing.