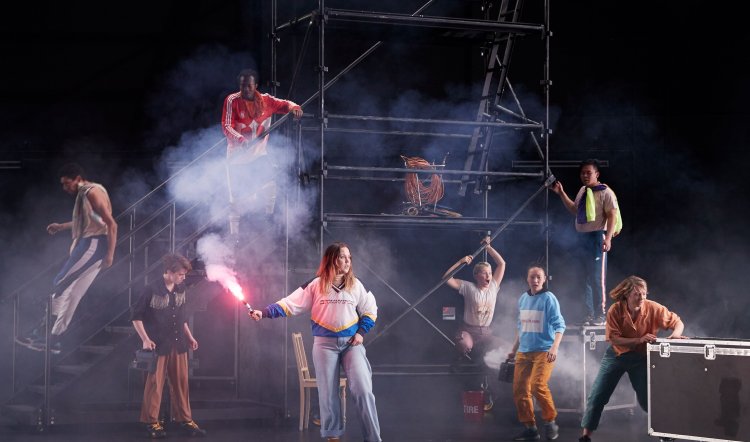 LORD OF THE FLIES

In the thoughtful collection of background materials on the STC’s website page for Lord of the Flies is a transcript of author William Golding’s lecture given when he received the Nobel Prize for Literature in 1983. It’s a long and windy thing but one observation is striking in relation to this production. He said:

“Like the late Mr Sam Goldwyn who wanted a story which began with an earthquake and worked up to a climax, we like a good lead in but have most pleasure in a succession of events with a satisfactory end-point. Most simply and directly – when children holler and yell because of some infant tragedy or tedium, at once when we take them on our knee and begin shouting if necessary – ‘once upon a time’ they fall silent and attentive.”

Well good heavens, that’s exactly what director Kip Williams has done in staging the 1954 classic tale of boys behaving extremely badly. This handsome, spectacularly-designed and lit production (Elizabeth Gadsby and Alexander Berlage, respectively, with Marg Horwell’s costumes) begins with the volume ratcheted up to 9.5 on the dial and that’s where it stays.

Unfortunately, that means there’s nothing left to do but shout and shout some more. Contessa Treffone as snarling dictator Jack, Rahel Roman as myopic fat boy Piggy, and Joseph Althouse as the doomed Simon, are the only three-dimensional characters discernible in the pandemonium. The rest are slight sketches in the Nigel Williams adaptation and they mostly disappear into the unmodulated bellowing and rampaging about. 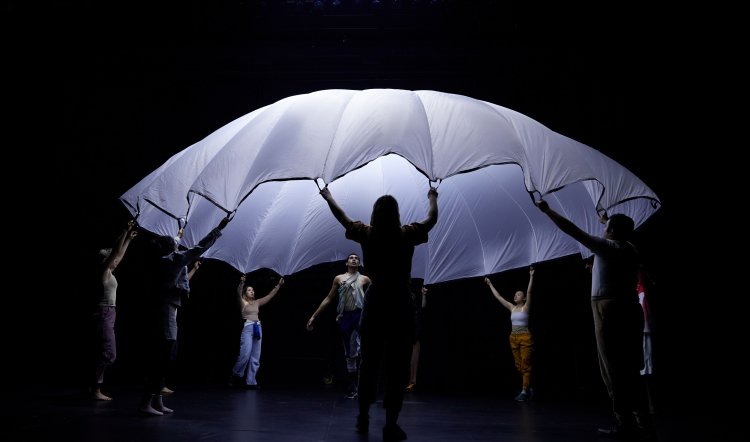 It makes it almost impossible to know or care about the boys, and as the piece is unrelentingly misanthropic anyway, the result is exhausting and unrewarding. This also applies to screen star Mia Wasikowska who struggles valiantly to make something of insipid nice boy Ralph – always a thankless task and made doubly difficult when an experienced stage actor such as Treffone is the blood-and-guts bad guy.

It’s also perilous to start out – as STC chose to do – billing Lord of the Flies as “the theatre event of the year”. It means audience expectations are ridiculous even before the action begins on the ominous, starkly-lit, empty cavern of the Ros stage. Scaffolding structures ingeniously become various parts of the island on which the kids are marooned, then an arresting light show of “neon” strips comes in to play and is everything else.

It’s great to look at but, again, any hope of getting to grips with the boys as individuals in whom we can invest our hopes and fears is lost in the colour and movement.

Another background piece on the website is a Q&A with Kip Williams in which he’s asked about his casting choices: gender-blind and basically a coalition of Australians today – across colour, physicality and sexual identity. It’s the kind of thoughtful decision that should eventually make it unremarkable – although still a ways off – and what Williams says about it ought to be read and inwardly digested by those who wonder why: 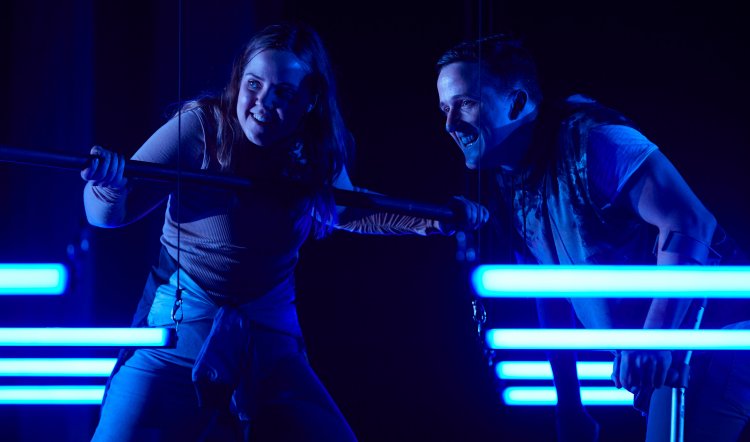 “I hope that people will see themselves reflected on stage in the storytellers, and be inspired by that. The story is upsetting, confronting and challenging. My hope is that the audience, seeing this group of people who represent a more inclusive idea of who we are as a community, uses that as a positive affirmation for what we could be, in response to how the play depicts what we shouldn't be.”

What you see on stage is an energetic and dedicated company of those already-mentioned plus Justin Amankwah, Nyx Calder, Yerin Ha, Daniel Monks, Mark Paguio, Eliza Scanlen and Nikita Waldron. It’s an uphill slog but they never give up.

It is argued that Lord of the Flies is a reminder or reflection of how quickly the thin veneer of civilisation can crack and be destroyed when the bad rise and the good do nothing. But given the state of politics and big business – worldwide – it’s not as if this is either news or surprising. And as it’s essentially nihilistic, despite the final moments, what’s the point?