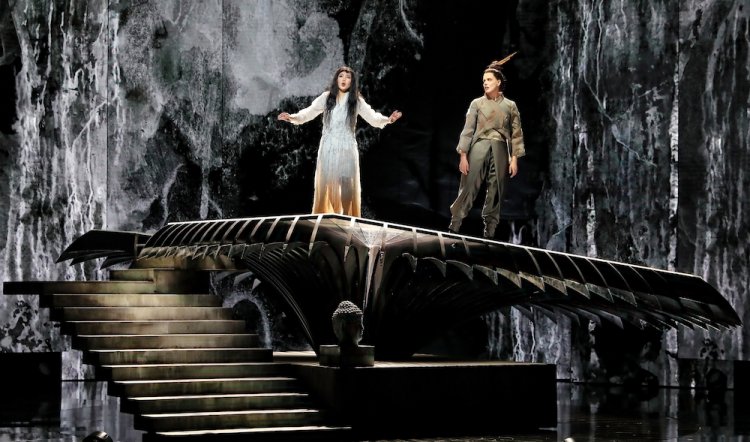 Whether it’s called shibari or kinbaku, in the context of the new Graeme Murphy-Janet Vernon-Michael Scott-Mitchell vision of Madama Butterfly, the Japanese art of rope bondage is a vivid motif. The production opens with Butterfly's dancer alter ego Teagan Lowe descending from on high, caught in an intricate web of scarlet hemp ropes.

When the earthbound Butterfly (Karah Son) makes her entrance, she is clad – startlingly – in a shiny black kimono (rubber? Leather?), with more scarlet rope around her middle in place of an obi. And at various moments during the performance, the scarlet rope device snakes around the LED screens of mainly black and white (Sean Nieuwenhuis – video).

And lest one hasn’t got the message, Cio-Cio-San (aka Butterfly) is also seen suspended high on a wall, like Christ-on-the-cross. It’s an arresting image but one of the confusions among many. For instance, her loyal servant Suzuki (Sian Sharp/Pendry) tends a shrine in their garden which cultural background suggests ought to be Shinto but is here a Buddha. Meanwhile Jennifer Irwin’s lavish costumes represent a dazzling collection of ancient, modern, oriental and western, historical and hysterical – often in one scene. Marvellous to look at but bewildering to get a handle on. 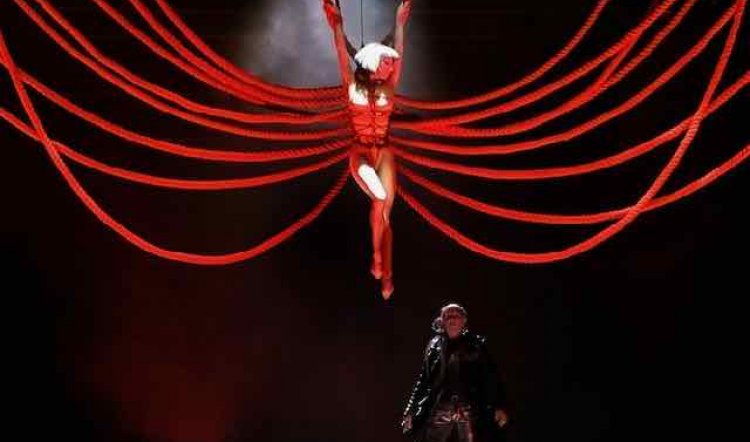 Also marvellous to look at, when not semi-strobing in B&W stripes, are the multiple projected moving images on the screens. These surround the raised metal and glass, platform thingy on which the main action takes place, above a judiciously used revolve. Lighting states (Damien Cooper) range from classic follow-spots – especially effective in Cio Cio San’s poignant moments of aloneness – across all the possibilities of digital set-ups.

The music, however, is a different story. Puccini’s luscious score is attended to with grace, accuracy and energy by the OA Orchestra under the baton of Massimo Zanetti. They sound wonderful in every aspect, from tender moments to soaring crescendo, and in one of opera’s most demanding roles, Karah Son is clearly at ease in the band’s embrace and on top form.

Aside from the sublime music, Madama Butterfly is a problematic piece in 2019 – even in an art form that abounds in problematic works. This new version, following on from the much-loved Moffatt Oxenbould envisioning of still pools and flower petals, is a necessary and welcome contrast. In some ways it tries too hard and the result is an overwhelming series of digitised visual tricks and cock-eyed Orientalism. Some are breathtakingly beautiful and relevant; others tend to distract from the singers and narrative. It’s a fine balance and not always achieved.

The small-scale human elements are more successful. As said, Karah Son is a glorious, aspirational Butterfly, both as singer and actor. As her “husband”, Lt FB Pinkerton, US Navy, Andeka Gorrotxategi is mostly as stiff as his uniform but is a fine singer. Michael Honeyman is a believable, compassionate man as the American consul Sharpless, while Sian Sharp’s highly effective turn as Suzuki becomes almost a trouser role. Her strutting, defiant portrayal suggests a greater love for Cio Cio San than is more commonly seen, and in this case heard as the two graffiti “cherry blossom” in shocking pink sprays as they combine with heart stopping clarity in the Flower Duet. 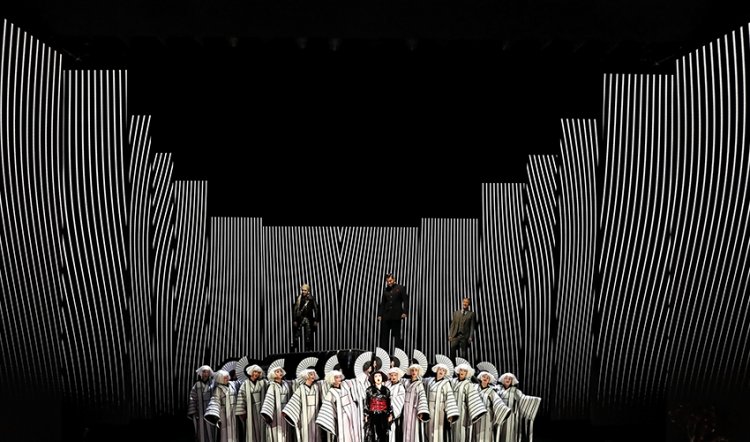 Goro, the pimp, is always an unpleasant figure and Virgilio Marino gives him a shuddery, acidic edge beneath his long silver-grey dreads. At the other end of the spectrum in finery and motives is Christopher Hillier’s Yamadori. The would-be suitor, merchant prince is dull in every way but his richly burnished gold outfit, sunburst hat and voice. Then, from the sublime to the ridiculous, Gennadi Dubinsky as Butterfly’s bonkers uncle the Bonze carries a menacing origami bird on his back. It towers over him but doesn’t manage to detract from his grand bass voice.

Finally, Jane Ede makes the most of the unforgiving role of Pinkerton’s proper American wife Kate. As befits a story that’s really all-about domestic abuse, she is as badly treated by Pinkerton as is Butterfly and manages to arouse sympathy where often none is to be found. The OA Chorus is excellent, particularly in a choreographed scene that brings thrilling life to the late orchestral interlude: in seamless formation the members seem to be a flowing mountain stream, or a wintry forest, or a figment of imagination...

The night belongs to Karah Son, however, as it’s from her the heart and soul pours when she finally faces the truth. Her dreams are dust and she must give up her son if he is to have a chance in life. Such is her pain that only a greater pain will suffice.