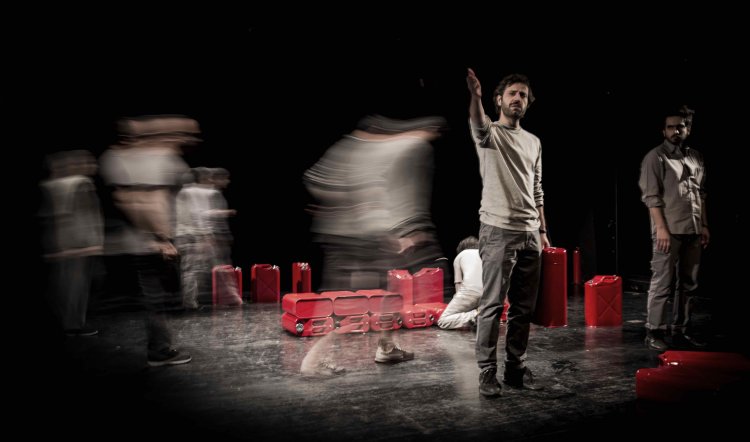 In presenting Manus to the Festival-going public, co-artistic director Neil Armfield said, “There is a special kind of shame – I’m sure the Germans have a word for it – which applies to the cruelty of your own country seen through the eyes of the world.”

The word might be something like “schadenschande” – the damage of shame – and it certainly felt like that after an hour in the company of Iranian actors, Ebrahim Azizi, Ehsan Bayatfar, Ali Pouya Ghasemi, Hana Kamkar, Hamid Reza Mohammadi, Nasrin Nakisa, Misagh Zare and their director Nazanin Sahamizadeh.

Armfield also said of Manus, ‘When we heard that a theatre piece had been created and was being performed in Tehran, in Farsi, about the suffering and human rights abuses that are happening on the islands under Australia’s watch, we felt compelled to seek this performance out... It is of crucial interest to all compassionate Australians.”

The same day Manus opened in Adelaide, temporary PM, Scott Morrison, flew to Christmas Island to hold a press conference. Its purpose was to frighten us all witless at the prospect of the tsunami of evil illegals responding to the Phelps Bill.

The presser ran under half an hour at an estimated cost to taxpayers of $2000 a minute. Meanwhile, the burden on the public purse of the offshore gulags of Manus and Nauru has already run into billions, and that does not include the human cost. 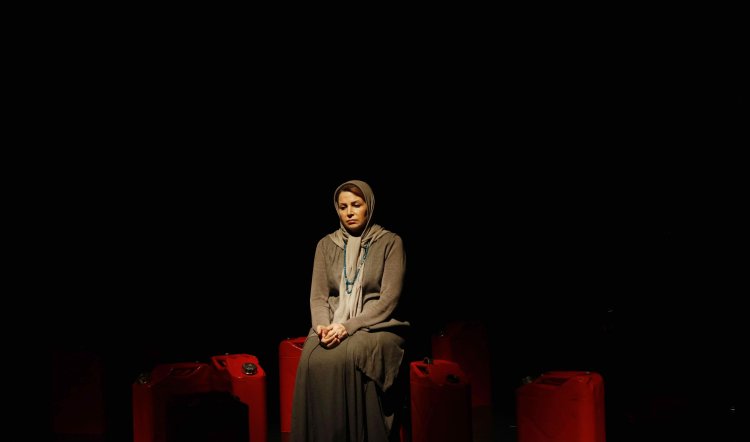 Those costs – and the people who pay and are still paying the price – are who we hear from and see in Manus. It’s verbatim theatre at its most raw and powerful. The dialogue is taken directly from interviews with men and women who have been incarcerated on Manus and Nauru for years.

These include the now famous Kurdish journalist Behrouz Boochani (six years and counting). Another relates the reality of the young man behind the news headline, Reza Barati. He was beaten to death in 2014, after which then Immigration Minister Morrison said to inmates in a video message, “If you choose not to go home then you will spend a very, very long time here.”

Morrison and other politicians can choose to ignore the truth: that “going home” means death, which is why these people left in the first place. For us – “ordinary” Australians – we ignore such truths at our psychic peril. We must look at the prolonged suffering and trauma of those held captive in our name. If we don’t, we’re no better than the beaters and rapists, than those who turn their heads and say, “It wasn’t my fault, I didn’t know,” or, “I was just following orders.”

Director Sahamizadeh first staged Manus in Tehran, where it ran for two months at Qashqai Hall. That in itself was a perilous undertaking: Iran’s theocracy doesn’t take kindly to its citizens absconding and begging for protection elsewhere. (Iranians are the most numerous in Australian detention and the Tehran regime imprisons any who are forcibly returned.)

Manus is played out in a sharply-lit black void on which is a stack of oddly beautiful scarlet petrol cans. These are occasionally picked up, carried, re-arranged and sat on by the actors. (Set designer: Amir Hossein Davani, lighting: Ali Kouzehgar.) Around them, a soundscape adds to the sense of foreboding (music: Behrouz Seifi). 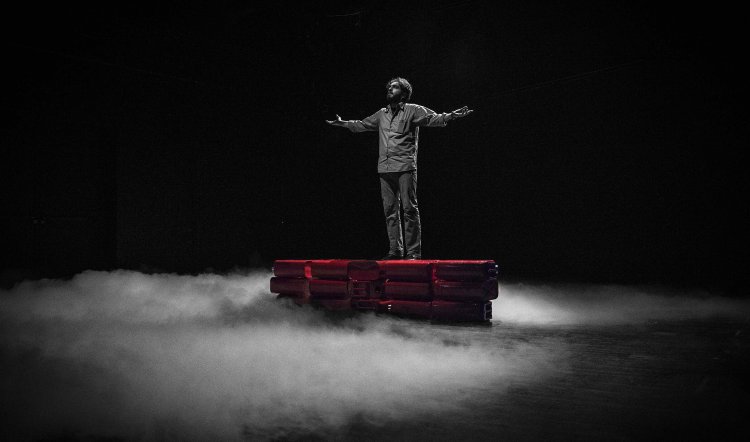 The actors speak the words of detainees directly to the audience, unadorned and in simultaneous English translation on the back wall. They are memories and descriptions, mostly from men, but – from Nauru – women too.

Anger, sorrow, fear and bewilderment are expressed in starkly conveyed accounts of brutality, degradation and cruelty. They beggar belief. Yet physical evidence abounds, as do eye witness accounts. These things have happened, are happening – we are paying for them, they’re being done on our behalf.

Manus has also been seen in Bangladesh and India but Adelaide is the western world premiere. And so politely barbaric is this classic agit-prop theatre, one wonders why the federal government hasn’t thought to fund a tour of asylum-seeker source nations. It would surely be a far greater deterrent than Morrison’s smug blether.

Rachel Healy, co-artistic director of the Festival, has said of Manus, “Audiences won’t laugh. They won’t walk out humming the tunes. They may be shocked, they may be angry, but they won’t be complacent and they may be inspired. These are stories of human resilience that must be told – and heard”. And we must bear witness. Recommended without reservation.