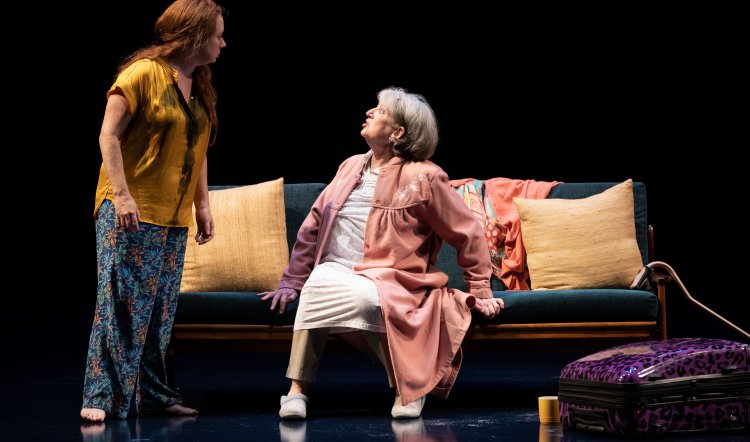 As Lucy Kirkwood’s new play opens, it’s 2008. The world’s TV news media is waiting, agog, for the Large Hadron Collider at CERN (Conseil Européen pour la Recherche Nucléaire) to do something amazing. The LHC cost billions and to most of us is unfathomably large and bizarre: a 27-kilometre ring of superconducting magnets built 100 metres underground that would finally – in 2012 – reveal the “God Particle”, aka the Higgs boson.

I’m sure you know what that is but just in case, Prof. Wikipedia says, “The Higgs boson is an elementary particle in the Standard Model of particle physics, produced by the quantum excitation of the Higgs field, one of the fields in particle physics theory.” So there.

In retrospect, a further reason for the global interest in such an abstruse event is probably because it was the first exciting thing to happen in Switzerland since fondue. That’s pretty much the view of Jenny (Mandy McElhinney) visiting from Luton, a boring town that used to be known for making hats and cars, but not now. This undoubtedly colours her view of the world’s dullest country – capital of the assisted death industry – when she observes that, no one comes to Switzerland intending to kill themselves, “they just come for a normal holiday and get driven to it.”

Jenny has come to visit her elder sister Alice (Jacqueline McKenzie), one of the physicists on the CERN team also waiting on what many outside science thought would be literally an earth-shattering event. Jenny is of this view as someone whose chief point of reference is Dr Google. This has had disastrous consequences for her as it convinced her to become an anti-vaxxer.

Kirkwood has written a wildly over-ambitious play that’s as entertaining as it is occasionally frustrating. Alice and Jenny are human particles that collide at regular and explosive intervals, they are orbited by others who also collide – with them and each other. Some are visible, some not, and mostly it’s riveting when not comically incomprehensible. 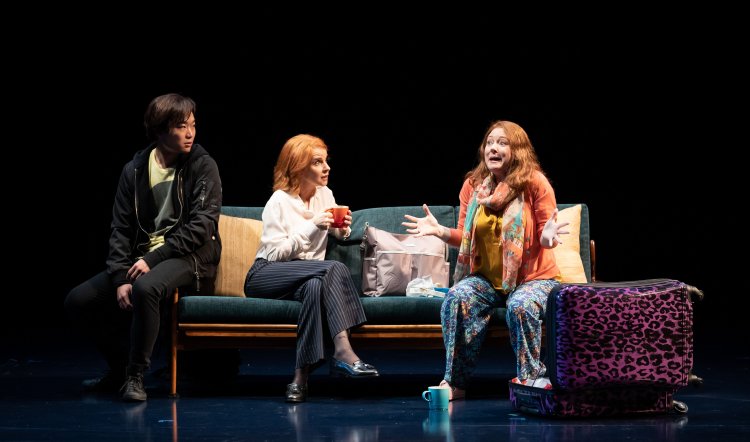 Essentially, Alice is dedicated to science and her family life has suffered: her husband left years before, and she has almost no connection with her son Luke (Charles Wu) although she doesn’t realise it. He is a super-smart teenager who hates the ex-pat life in Geneva and whose laidback ex-pat girl-friend Natalie (Nikita Waldron) is his only confidant at the school he also hates: cue further disastrous consequences.

Back in Luton, Jenny cares for Karen (Annie Byron), mother of both women. When Karen accompanies her daughter to Geneva for the CERN event we learn that this once-brilliant scientist is not only still bitter at doing the work that won her husband the Nobel Prize, but also is beginning to deteriorate into her own physical and mental black hole. She is also terminally exasperated by her “stupid” daughter and sulkily jealous of her clever one.

Occasionally circumnavigating these galaxies of discontent, while delivering some mind-blowing if extraneous speeches to the audience, is Boson (Jason Chong). He could be Luke’s absent father or a symbol of what’s out there if only we knew; either way, his calmly watchful presence contrasts with the emotional and verbal eruptions that continually threaten and occur.

STC has staged Kirkwood’s two previous hits, the monumental Chimerica and the three-hander The Children – this one builds on both. There are huge questions and within them and most often mirrored by them are the tiny matters of human emotions. Jessica Arthur directs a clear vision and unravels Kirkwood’s maelstrom of themes and story lines. That Arthur and the cast achieve this is a tribute to their relationship and her growth as a director.

Arthur is aided by a set and integrated lighting – Elizabeth Gadsby and Nick Schlieper – that conjure abstractions of endless space, chilly contemporary living, frigid Geneva and cool technology. They emphasise the insignificance of the humans and their passing-in-the-night plight is heightened by judicious use of a slow revolve. The result is pathos, tragedy and casual cruelty repeatedly crashing into occasional compassion and much laughter. 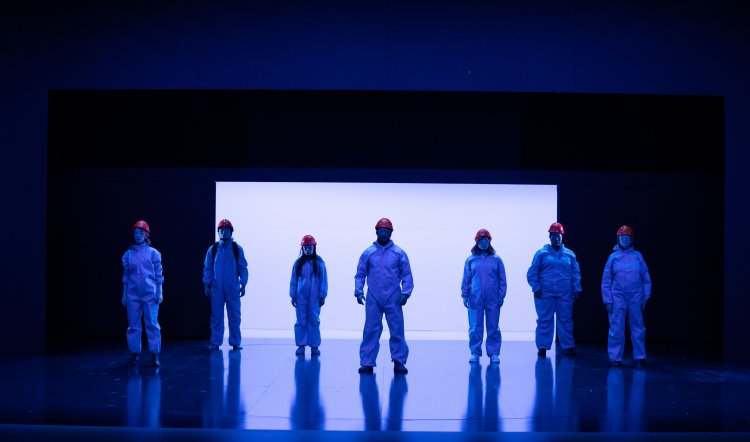 Mosquitoes is a flawed but beguiling play. Mandy McElhinney is outstanding as the sister who likens herself to Forrest Gump even as she negotiates the crabby nebulas of her high-flying mother and sister. Jacqueline McKenzie is excellent in a less well-defined role and the two are terrific across the spectrum of their relationship.

Annie Byron is also exceptional as the once grand and now disintegrating matriarch whose acid-dipped tongue doesn’t quite disguise her despair. As the son who just wants his mother to listen, Charles Wu is a whirlwind of scarcely contained frustration, while Nikita Waldron has the ennui of the “wha’eva” generation down pat.

Mosquitoes is the antithesis of the “well-made play” but anyone who craves that will love it. So will anyone wanting to get up close and personal with impossible concepts, human frailty and very sharp comedy. Recommended.