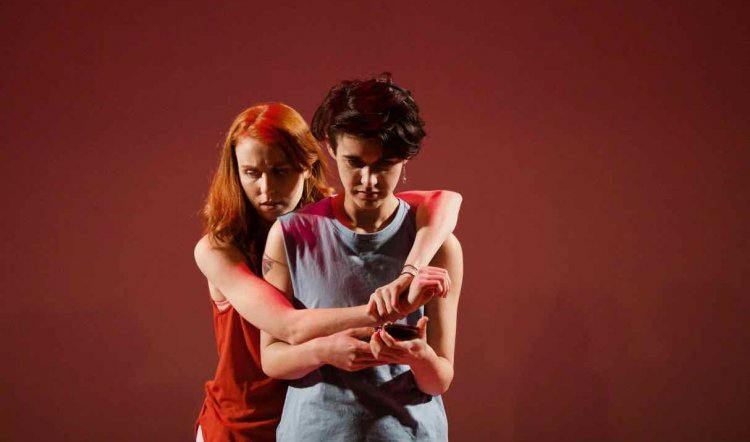 NORMAL, The Uncertainty Principle at the Old 505 Theatre, 29 May 15 June 2019. Photography by James Balian - above - Alexandra Morgan and Finley Penrose; below - Chika Ikogwe and Morgan; below again - Cecilia Morrow and Morgan

The small town of LeRoy in western New York state has one set of traffic lights. It’s where Rough on Rats rodent poison and Jell-O were first manufactured. Its current mayor is Greg “Porp” Rogers. All this according to the town’s page, but nowhere does it mention the events of 2011 that briefly made LeRoy the focus of TV news crews.

The story was headlined in the New York Times, “The Mystery Of 18 Twitching Teenagers” and in 2012, playwright Katie Pollock came across a reference to LeRoy’s affliction. She tucked it away for later and after many drafts and readings, it’s emerged in 2019 as Normal, a drama more universal than one might imagine.

That a small town is proud to acknowledge Jell-O and rat poison but is coy about communal Tourette’s says a lot about what we consider “normal” – and that premise, but not LeRoy itself, is basically what Pollock explores in 70 taut minutes with a cast of four.

Poppy (Alexandra Morgan) and Sky (Finley Penrose), her BFF, are two of the cooler kids as those semi-outsiders resentfully admired by peers. Sky in particular is a sharp-tongued smoulder of resentment and their charm is made more so because, to an adult, they are an unnerving smart-arse. 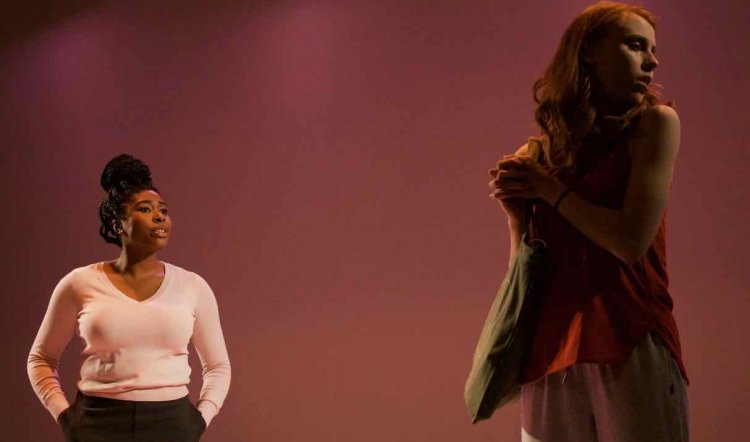 Poppy is a classic single mother’s grudging-but-loving brat until her life turns upside down. Mad at mum (Cecilia Morrow) for not buying her a new party dress, she faints while trying to shoplift one. When she comes round – to the relief of otherwise bored shop assistant Chika Ikogwe – something has changed. The eye blinks are at first merely irritating, but the full-on twitching and thrashing are alarming.

Home life and school merge into a nightmare of adult disbelief and classmates’ derision. Teacher Ms Holt (Ikogwe again) is the epitome of normalcy and how it can be wrenched out of shape, while Poppy’s interactions with her mother range from teenage dissing to heartrending bewilderment.

Morgan’s Poppy is a beautifully wrought, three-dimensional character: a conventional adolescent thrown into terrifyingly unconventional territory. Her life and relationships crumble with distressing speed. Is she just a weirdo, an attention-seeker? Is it catching? Is there something wrong with the town?

The changes in the everyday for Poppy and her now ex-friends, as well as for her mother and their circumstances are frightening. The apparent inevitability and actual speed with which normal becomes unacceptable, irrational and dangerous is all too plausible. 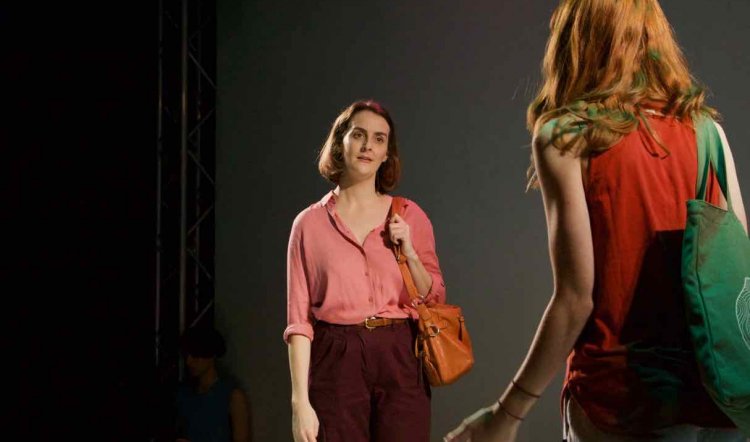 What happens to Poppy and the town is less the focus of the action than the how of it and Anthony Skuse directs with a light and super-intelligent hand. Normal could so easily be tipped into melodrama or bratty comedy by the wrong approach because it’s theatrical, dark and funny by turn. But neither playwright nor director make a wrong move and the result is enthralling.

The actors are also very effective, with Morgan carrying the lion’s share of stage time, yet astutely supported by Ikogwe, Morrow and Penrose in their various roles. The increasingly dissonant world is signalled by an often almost-imperceptible soundtrack (Cluny Edwards). A raised rectangular stage, front and centre of the auditorium is where it all happens– unencumbered by props or distractions and subtly lit to humanise the actors and indicate change of place (design and lighting Kelsey Lee).

Normal doesn’t offer neat solutions. It’s the journey, not the destination and, as well as Poppy’s malady, much attention and detailed characterisation are given to the way our lives are such an assumption and then equally easily turned upside down. Everything about these girls and women is “normal” – and we’re invited to consider what we think we mean by that; and also what society demands of girls and women. Normal asks some unanticipated questions of its audience. You might be surprised by your answers – and your questions! Recommended without reservation.