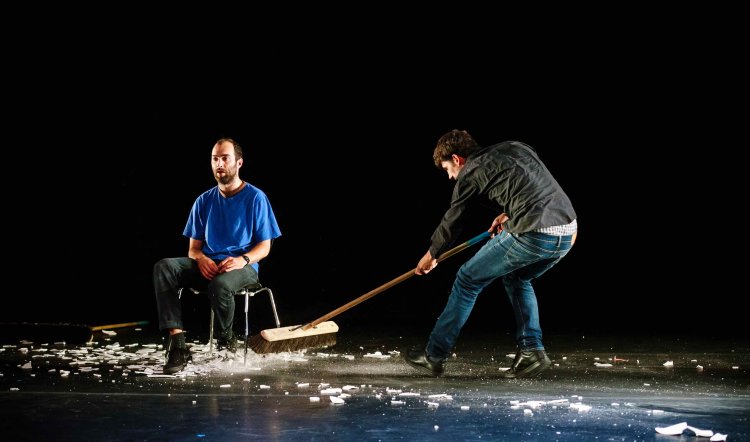 It would probably help to be an entitled, smug, overgrown schoolboy to enjoy this show. It seems to lean heavily on the Seinfeld idea of “a show about nothing” without ever really getting what that meant. (That it’s actually a show about everything.)

Anyway, it’s titled Palmyra, because that’s an ancient city that was pretty much destroyed by IS, but don’t look to that for symbolism or meaning: it’s not there, except in obvious, silly ways. (Smashing plates – civilisation in ruins etc.)

The (mercifully) one hour show was devised by UK/French pair Nasi Voutsas and Bertrand Lesca. Nevertheless, there are hours and there are hours – this one felt particularly endless. Palmyra harks back to experimental theatre of the late last century in subjecting audiences to pregnant pauses so long you could gestate and produce an elephant.

You can see the two lads inwardly smirking as their audience courteously suppresses coughs, fidgets and other reasonable human impulses in the face of extreme self indulgence. It could be that the question for those in the bleachers is: Why am I putting up with this? Why am I being so polite? (Answer: well, it is Adelaide and it is Sunday afternoon...) 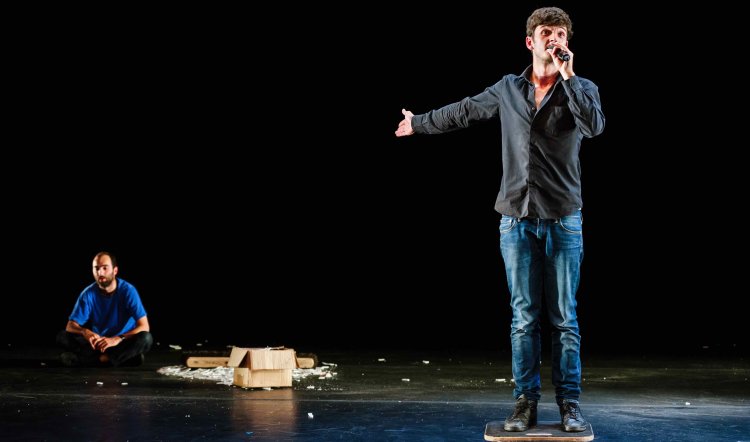 In essence, we have a dark, wide space empty but for two chairs and beside them, two white plates. One is broken. Handel’s sublime “Lascia ch’io pianga...”, flows from the sound system via a MacBook. As the English translation is “Let me weep...” it’s more appropriate than is at first evident.

Nasi and Bertrand play games of passive aggression and aggressive passivity. Their interactions defy logic, but their attitude towards the illogical is to force the audience to take sides, despite all evidence pointing to the contrary.

It’s clever. What is being demanded of the audience is the response  – Yes, your nonsensical behaviour is okay and makes sense, even though I know it doesn’t, but I’m a genteel, theatre-going bourgeois so I won’t jack up, which by the way would be the reasonable thing to do.

In between times, they muck about on a couple of those mini four-wheeled trolleys used to move pianos or large artworks – dancing and “flying” hither and yon, crashing into each other and being mean. Hilarious, not. And it’s all done to the Handel aria (above) which is sung by a fabulous soprano (Joyce Di Donato? Yvonne Kenny? Who knows) and it serves to undermine and disrespect the singer. 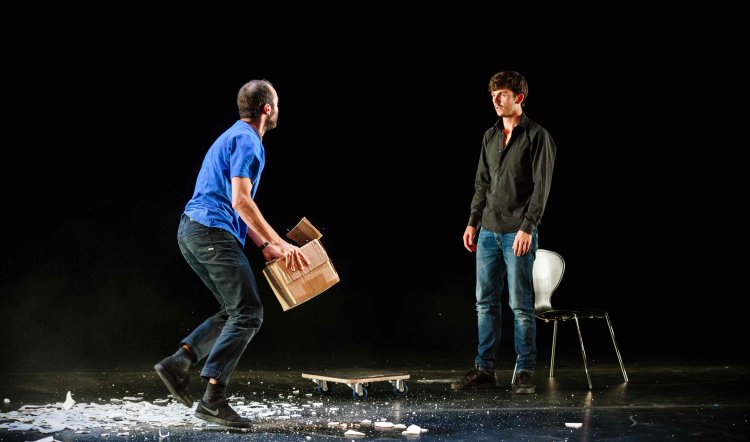 The same can be said of another recording: Ella Fitzgerald and Louis Armstrong unwittingly illustrate Nasi and Bertand’s puerile ideas with “Let’s Call The Whole Thing Off” (and thereby also diss the Gershwin brothers at the same time). Call me humorless, but don’t call me Shirley.

Palmyra was a huge hit at the Edinburgh Fringe in 2017 and elsewhere since. There were some in the audience (Sunday, 1.30pm) who seemed to be mildly amused, or giggling nervously, hard to say. Most sat in reverential silence.

All in all it reminded me of the thing I hated most about childhood Sundays – being in church, hot, bored and irritated and with no means of escape lest God strike me dead. One day I figured out She wouldn’t mind and I left, never to return. Did the same thing at the Main Theatre, AC Arts and haven't looked back. Every Festival has one – for me, so far this is it: get it, I did not.

PS: have subsequently discovered that despite a tacit invitation to leave and one of the duo mouthing, "Tell him to fuck off," or similar – those of us who did leave did so before the official end. Who knew.