It’s almost impossible to think that Jack Black, (Lord) Andrew Lloyd Webber and Julian (Downton Abbey) Fellowes belong to the same species, nevertheless, they have in common School of Rock. Black starred in the 2003 movie while the two Poms are largely responsible for the current stage version. Amazing.

As fans know, the show is about no-hoper, chubby, rock muso Dewey Finn (Brent Hill) who is simultaneously booted out of his own band and threatened with being booted from home unless he pays some rent to the long-suffering friends, Ned (John O'Hara) and Patty (Nadia Komazec), off whom he’s freeloading. He needs money fast and when he fields a phone call meant for Ned offering a relief teaching gig, he poses as Ned and takes it.

Horace Green Preparatory School is where the brats of the 1% go to learn how to be even more entitled and Dewey/Ned lands in their horrified midst like a cow pat at a garden party. The school Principal, Ms Rosalie Mullins (Amy Lehpamer), is persuaded against her better judgement to let him stay, despite clear evidence that his relationship to the curriculum is distant. 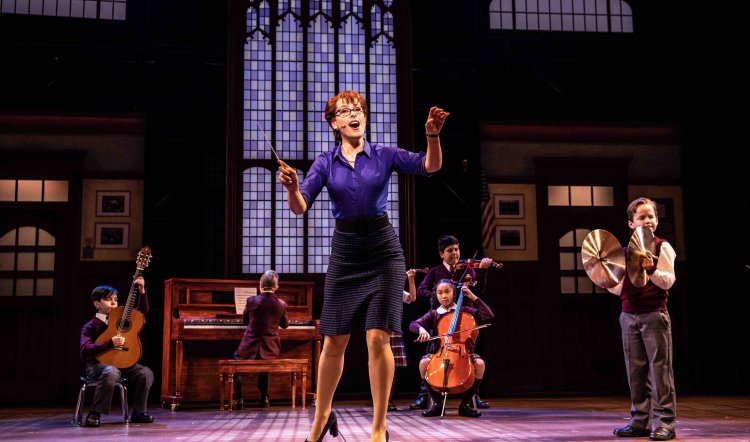 All the above takes a good 15 minutes to be spat out and they feel longer, but be patient! When the kids arrive on the scene the evening instantly turns electric – and not just because Dewey/Ned forces them to give up cello for Fender bass, Mozart for rock keyboards and polite classical guitar for a white Epiphone “1984” Explorer.

The show rotates three casts of child performers and on opening night the kids absolutely rocked. They light up the theatre, galvanize the audience and blow away the on-stage adults at every turn. Arguably, the children are even more crucial to the show’s success than, say, Matilda or Billy Elliott, and the standard across the company is eye-poppingly spectacular. They’re more than worth the ticket price and make School of Rock the go-to summer holiday treat for families of all ages.

That’s not to say the adult performers are any the less: Brent Hill is a gloriously anarchic teddy bear as the man-boy who would be a rock god. Amy Lehpamer makes her unlikely unstitching from lemon-lipped Principal to secret rock chick credibly touching, and she gives “Where Did the Rock Go?”, the show’s big-belt ballad, a gorgeous, ripping treatment. The ensemble – doubling by turn as teachers, parents and crotch-thrusting hard rockers – is sharp in characterisations and choreography, but it is all about the kids. 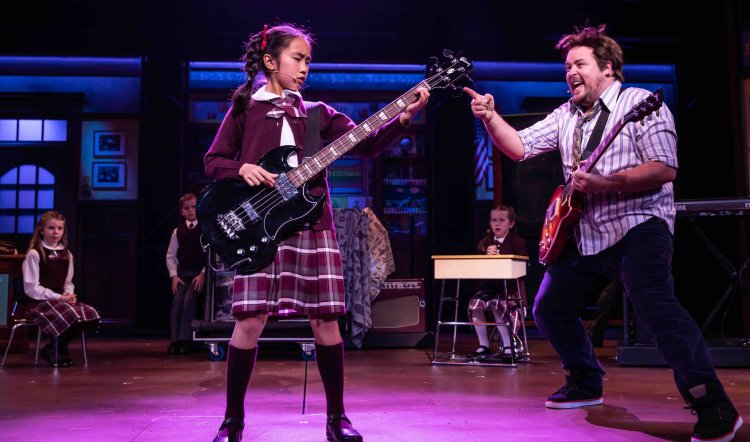 Although the storyline is wafer-thin, there’s something truly uplifting in the way the littlies transform. They start out as subdued and often miserable little snots – making a true point with the poignant “If Only You Would Listen”. But, under Ned/Dewey’s take-no-prisoners tutelage, they turn into a gang that defies palpitating parents and horrified teachers to let rip with “Stick It To The Man”, when they make it through to the finals of the Battle of the Bands. And yes, although there’s a terrific band in the pit to carry the main show, the kids really do play their own instruments and really do their own singing – and they’re fabulous!