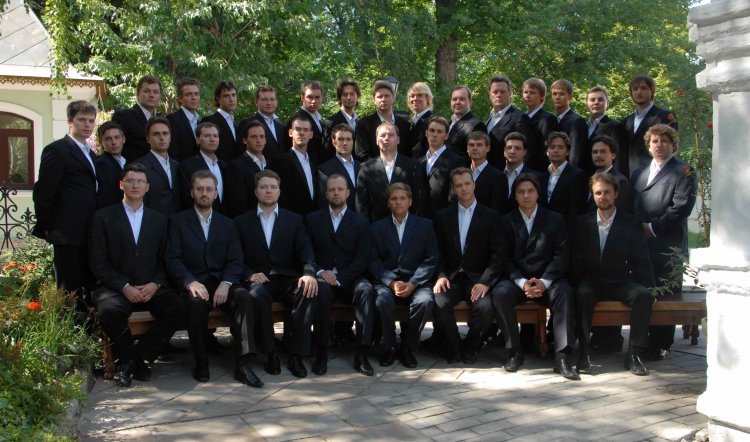 Just seventeen singers and their leader – Regent of the Choir, Nilon Zhila – filled the Adelaide Town Hall on Sunday evening with sublime sound, both sacred and profane. It was a joyous concert that could have gone on and on if someone had thought to break out the kvas. As it happens, after four encores the audience trooped out into the still warm night, smiling, laughing and uplifted. It was that kind of gig.

The Sretensky Monastery was founded in Moscow in 1395 and the first part of the Choir’s program focused on sacred choral works and ancient chants as well as contemporary liturgical compositions. These short but rich pieces – “Now All The Heavenly Powers”, “Praise The Name of God”, “God Is with Us” and so on – served not only the Almighty but also to introduce listeners to the remarkable power, precision and warmth of the voices.

The second half relaxed into the folk traditions of the Cossacks and the Ukraine. It was a reminder that the monastery and its singing monks were very nearly lost after the Soviet Union dumped Russia and its satellites into politically correct gloom. The Bolsheviks took over the monastery, exiled its monks and dismantled their buildings, including the 14th and 16th century churches of St Nicholas and Mary of Egypt.

Glasnost brought hope and light back to Moscow in the 1980s – and the monastery. Its choir – from small but perfectly-formed tenors to burly baritones and basses – are now travelling the world dressed, in Adelaide at least, in royal blue tuxes, wing collars, dicky bows and gleaming black patent shoes. Visually they evoke memories of Perestroika even as Russia is once again looking as forbidding as its leader, the Easter Island monolith, Vladimir Putin.

This microcosmic musical history held a packed house in thrall. The understated grace of its ecclesiastical roots drawing in listeners and accustoming ears to the uncommon live experience. The voices soared and receded, soared again, swirling in exquisite harmonies and counterpoints.

From time to time, soloists stepped out from the ranks to lead a piece. Tenors Ivan Leonov, Ian Skrylnikov and Alexey Zakatov sent their voices freely into the rafters of the Town Hall; baritones Mikhail Turkin and Mikhail Miller filled the space with sure resonance; while Vadim Zaripov’s magnificent bass touched the audience with its visceral power even as the gentle waltz of “The Hills of Manchuria" reminded us of the tragedy at the heart of so much of the folk repertoire (war, loss of life, loss of love and memories of home).

Zaripov also led the choir in an unexpected encore of the spiritual, “Let My People Go”. It was a rendition so electrifying in its exuberance and intensity as to bring Paul Robeson to mind. A rare and heartwarming Festival treat.