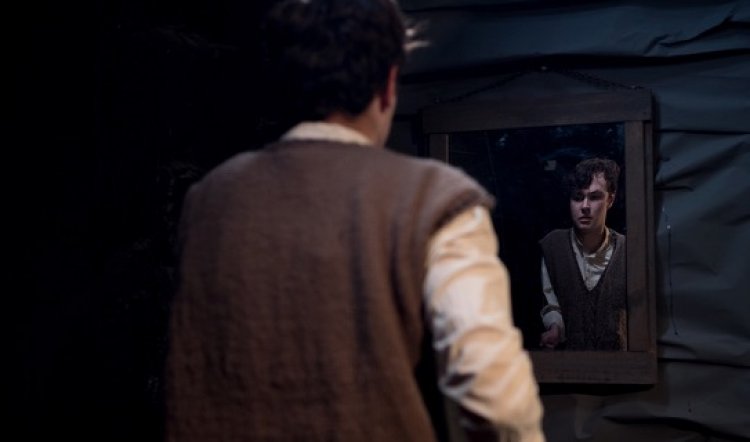 THE CRIPPLE OF INISHMAAN

There is something about Ireland and contemporary Irish drama that captivates outsiders: it’s lyrically romantic in telling stories of the cruelest and most ignorant protagonists. So it is with Martin McDonagh’s The Cripple of Inishmaan – about a boy who lives on Inishmaan, one of three small islands off the south-western coast famed for complicated knitting and extravagant stories.

McDonagh was born in London of Irish parents – his mother from County Galway, where she returned in the 1990s. McDonagh and his brother spent school holidays there and the vivid extremes of his characters and situations are strongly suggestive of the remembered intensity of childhood. These people have been gestating in McDonagh’s imagination for years.

Billy Claven (William Rees) is an orphan now 17 who lives with his sour milk-faced “aunties” Kate (Megan O’Connell) and Eileen (Sarah Aubrey). He is known as Cripple Billy, born physically impaired, although there’s nothing wrong with his mind. He is smart and – good grief – he reads, but this doesn’t stop his aunties remarking that he’d never get a kiss, “unless it was by a blind girl,” because, “you’d see nicer eyes on a goat.”

Unsurprisingly, he dreams of escaping, not so much the isolated island, but the casual cruelty and hopelessness around him. Chiefly, Slippy Helen (Jane Watt) the object of his unspoken affection. She is also smart, but doesn’t know it, so she’s violent and angry by turn and has no clue why her life and circumstances fill her with hot rage.

In and out of the beggarly village shop run by the sisters (canned peas a specialty) comes Johnnypateenmike (Laurence Coy) whose stock in trade is news. Some might call him a gossip, but in a community where even nothing is something, any small item – a goose pecking a cat and both mysteriously dead – is to be savoured. 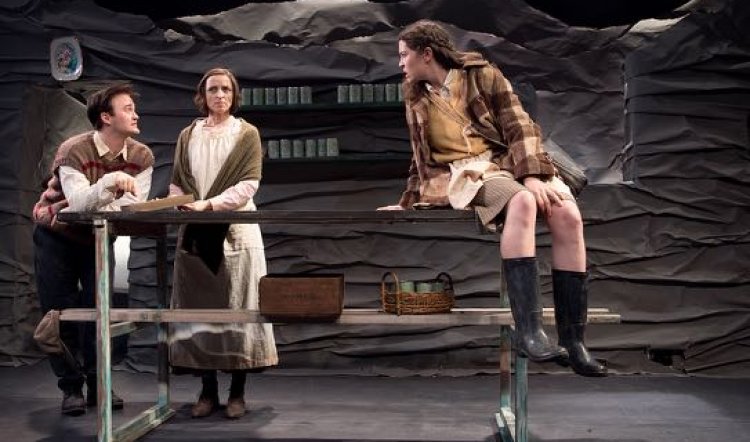 One day there is actual news: a Hollywood fillum producer has arrived on neighbouring Inishmore to make a documentary. And it’s here that legend, reality and fanciful memory become intertwined. In 1934 an American did make a ficto-doco, Man of Aran, that depicted the quaint lives of locals. And this is fragmentarily seen on a bedsheet-screen in the second half. There is also a whiff of Ryan’s Daughter, the 1970 Hollywood epic that had John Mills as a dribbling “cripple”, but basically starred the lush glory of the south-west.

Billy’s ambition is to go to Inishmore and secure a screen test, whatever that is, and leave for America. He persuades fisher-boatman Babbybobby (John Harding) to give him a ride in his coracle, even though he can’t row. As it happens, Billy is an orphan because his parents drowned in circumstances that change depending on who’s telling.

Despite the vicarious excitement of what’s happening on the neighbouring islet, life on Inishmaan is still a vortex of not much, in it is Slippy Helen’s lolly-sucking brother Bartley (Josh Anderson) and Johnnypateenmike’s perpetually sozzled Mammy (Jude Gibson). She for whom glib lies about her intake of whiskey for breakfast are exasperation personified for the Doctor (Alex Bryant Smith). All while the egg man does or not have eggs for the shop, or Helen decides to smash a few over her daft brother’s head, or they’re all a joke on us being so steeped in the idea of Irish “characters”.

And it’s in these throw-away ideas that The Cripple of Inishmaan breaks the bounds of the everyday. If Seinfeld thought he was the first to make comedy about nothing, he should think again. The play is so much about nothing that the almost constant laughter from the audience is barely noticed; as are the harder, darker themes that thread through the narratives. The politics – of sexual and national oppression –are in there too, if you care to look.

Director Claudia Barrie harnesses a difficult play with sure hands. On opening night things were a little ragged here and there – because of the set changes being more self conscious than sure. (Rarely have shelves of canned goods seen so much travel in such a small space and short time.) Nevertheless, it’s a fine, absorbing play given the very best by its actors, all of whom will surely settle as they remember they don’t need to be funny to be funny, or Irish.

As it is, newcomer William Rees is exceptional – subtle, strong and honest in a role that keeps him on stage throughout. As the sisters, Megan O’Connell and Sarah Aubrey are equally intelligent in their rendering of the shopkeepers for whom disappointment is a life companion. Similarly, Josh Anderson and John Harding effortlessly occupy the shades and colours of two contrasting young men.

Laurence Coy and Jude Gibson chew chunks off the furniture as the dreadful news vendor and his drunken mammy and are by turns infuriating, funny and sad. Last but definitely not least, Jane Watt is a tragic and hilariously awful heroine as the archetypal mean girl born many decades too soon. She’s a cracker.

The hardware – set, lights and music – is exceptional. Rarely has the room looked so bleakly ravishing as it does with Brianna Russell’s torn, crumpled grey, black and white paper as stark island hills and buildings. The single piece of furniture – by turn shop counter, coracle and bed – is also clever if a bit busy – but better more imagination than less.

So, similarly, Benjamin Brockman’s insightful lighting gloriously suggests sunlight, rain, mist and desolate beauty. The look is complemented by sound designer Kailesh Reitmans whose morsels of the folkloric and filmic orchestrations also evoke romantic Ireland and Hollywood. Costume designer Emily Brayshaw and consultant Sue Bateman conjure up 1930s privation with a witty palette of dreariness and grime – it fair makes you itch and sniff. Finally, voice and dialect coach Amanda Stephens-Lee has coached the cast into uniformly excellent and sustained southern Irish voice: remarkable effort by all. Recommended without reservation.